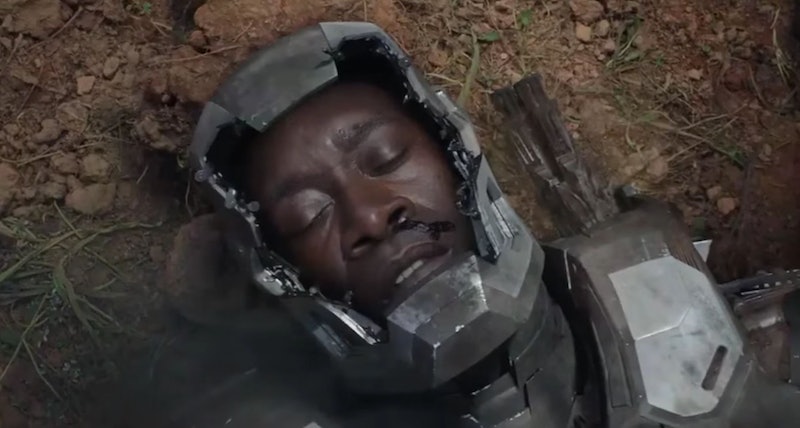 Marvel's newest and biggest film, Captain America: Civil War, raises the stakes higher than they've ever been. Sure, the Avengers have faced global level threats before in the form of Loki and Ultron, but never before have the good guys been squaring off against each other in a large scale battle that threatens to tear the team apart for good. And as is the case with any war, there are expected to be some casualties. Of all the characters in the movie, it seems like James Rhodes, AKA War Machine, is the most likely to be killed. So does Rhodes die in Captain America: Civil War ? Is he forever gone from the team? I've got your answer, but beware, spoilers ahead.

Fans of Don Cheadle's character can breathe a sigh of relief. Rhodes does indeed survive the events of Civil War . However, he doesn't make it out unscathed, and definitely comes closer to biting it than anyone else. In the heat of the battle, Captain America escapes with Winter Soldier in a plane. Iron Man and War Machine attempt to stop him, but Falcon pursues them. Vision then tries to get Falcon off their backs, and takes aim with his solar beam. He misses Falcon, and instead hits Rhodes directly in his suit's arc reactor. This immediately causes the suit to shut down, and Rhodes falls thousands of feet to the ground.

After Rhodes falls, Iron man immediately flies down to check on him. Rhodes is unconscious and bleeding, but he is alive. Falcon also drops in to make sure he's OK, but Iron Man angrily blasts him with his repulsor beam — not enough to seriously hurt him, but enough to let him know to back off. Iron Man then asks Vision what happened, and Vision says he became distracted, and though he doesn't admit it, it's because he was worried about Scarlet Witch's safety. Iron Man points out that he didn't realize Vision could get distracted, and the android agrees that he didn't either.

Later, it's revealed that Rhodes suffered a severed spine in the accident, and he's lucky to be alive. It's theorized that he may never be able to walk again, but by the end of the movie he's working on his physical therapy with Tony Stark and seems to be on his way to recovery. But he still has a long, difficult road ahead of him, and at this point it's unclear if he'll ever be well enough to suit up as War Machine again.

So James Rhodes does survive Captain America: Civil War, but just barely. With the injury he sustains, his Avenging days may be over, and it just goes to show you that this movie isn't messing around when it comes to the safety of the Avengers.