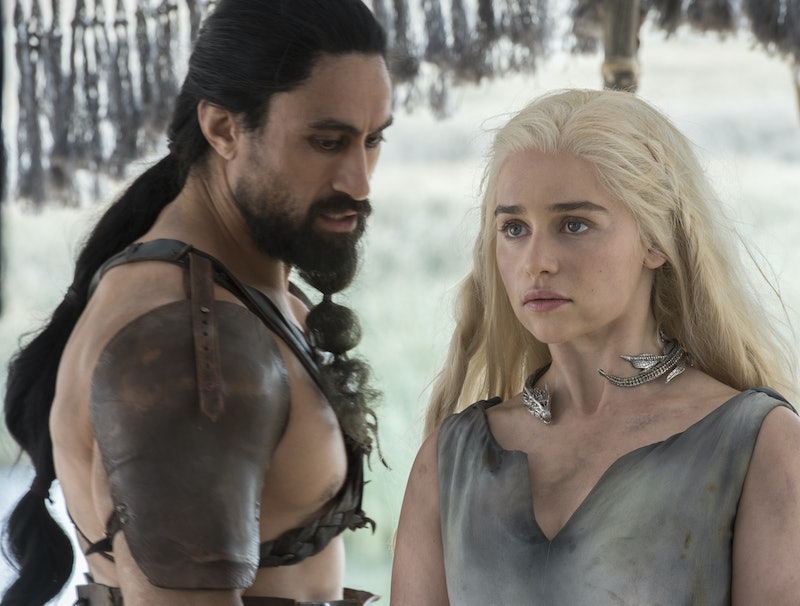 After emerging as the Mother of Dragons during her first encounter with the Dothraki, Daenerys Targaryen probably didn't expect to be battling for respect with the warrior tribe again. Enter: Khal Moro the new khal on Game of Thrones who is causing Daenerys some grief in Season 6. After fleeing Meereen on her dragon Drogon at the end of Season 5, Daenerys was surrounded by Dothraki. The Season 6 premiere of Game of Thrones revealed that this group of Dothraki answer to their leader Khal Moro, portrayed by Joe Naufahu. Khal Moro said that Daenerys' fate with her dead husband's tribe is to join the other Dothraki widowed wives in the city of Vaes Dothrak, but fans know she will not tolerate being stuck in such a submissive role.

While Daenerys' encounter with the leader of the Dothraki in the "Red Woman" episode of Season 6 was certainly not great, it could have been a helluva lot worse. Although I was concerned for Daenerys' safety, her interaction with Khal Moro was a little bit lighthearted, which is truly saying something for a show that I don't think knows the meaning of the word "lighthearted." New Zealand actor Naufahu is the man behind Khal Moro and if you enjoyed his witty — and, at times, thoroughly insulting — repartee with Daenerys, Naufahu promises there is more of that to come in an interview with The Wall Street Journal.

Khal Moro sounds like he will continue to add some comedic relief to the dark show, according to Naufahu's Wall Street Journal interview and he mentioned how Emilia Clarke and him had fun filming their parts as well — specifically when it came to the made-up language of Dothraki. "So we'd have little jokes, me and Emilia, with our own little pidgin Dothraki here and there," he told The Wall Street Journal. "And I'd slip in some Samoan and Tongan words and try to put her off."

Naufahu is experienced in the Samoan and Tongan languages since Naufahu's mother is from Samoa and his dad is from Tonga, as he revealed in a Facebook live chat with Yahoo TV. He used his knowledge of those other languages to his advantage to mess with Clarke, who has been a master of the Dothraki language since Season 1.

Before becoming an actor, Naufahu was a professional rugby player, though it's worth mentioning that Naufahu's IMDb page does have one credit listed from before his professional rugby days. As I recently traveled to New Zealand, I know how seriously that country takes the sport of rugby. Yet, Naufahu played professional rugby outside of his home country since he was part of England's Leicester Tigers team and Scotland's Glasgow Warriors team.

After he retired from rugby, Naufahu took on acting, particularly in New Zealand-based projects. Although Game of Thrones may seem like a huge change for the actor who isn't that well-known in the United States, Naufahu has been on an epic premium cable series before — Starz's Spartacus. And, as with most actors who land a gig on Game of Thrones, the HBO series won't be the last you'll see of Naufahu since he's in the upcoming Scarlett Johansson film Ghost in the Shell.

Outside of his acting career, he also owns a gym in Auckland, New Zealand, named Ludus Magnus after a gladiator training school from Ancient Rome, further channeling his roles as an intimidating warrior, even though he seems like a genuinely nice guy in his interviews. It's kind of hard not to be nice when you're from New Zealand.

As for the character of Khal Moro, his role on the TV series is interesting considering his character's limited presence in the A Song of Fire and Ice novels by George R. R. Martin. So far, Moro has only been actually present in the first book of the series, Game of Thrones, when he attended the wedding of Daenerys and Khal Drogo. He was also referenced in the fourth novel of the series, A Feast for Crows. The wikia for Game of Thrones the TV show theorizes that Moro may be a large character in Martin's forthcoming book The Winds of Winter, but we'll have to wait to find out if that's true since the book might not come out until 2017.

Without the books to go off, you'll just have to enjoy David Benioff and D.B. Weiss' version of the character as Moro enjoys antagonizing Daenerys. Her storyline with Moro could go in many directions, including perhaps connecting more to Khal Drogo, but viewers know that Jorah and Daario are hot on Khaleesi's trail. Since she may not stay in Khal Moro's control for much longer, I'll appreciate watching the more humorous side of Game of Thrones, courtesy of Naufahu, while I can.