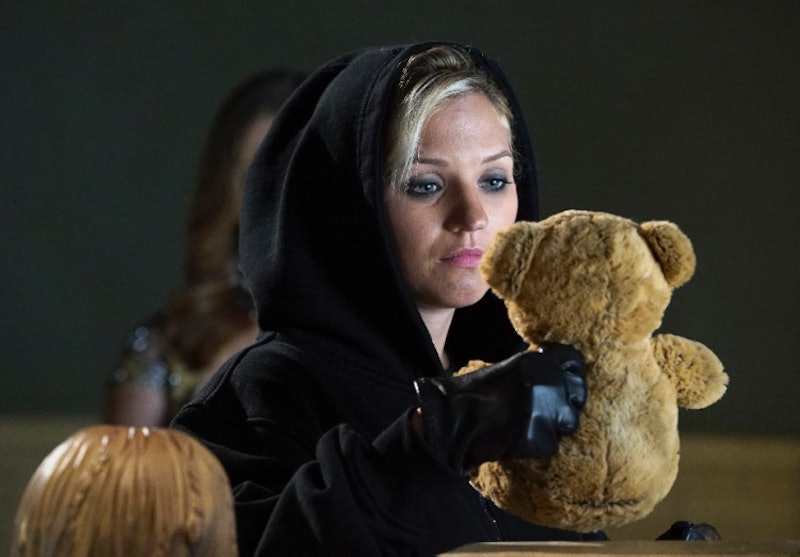 After years of being stalked by Big A, the Liars faced an entirely different challenge in Season 6B: being framed for Big A's murder. Charlotte DiLaurentis was found thrown from the bell tower in the premiere episode of Season 6B of Pretty Little Liars, and it put Spencer, Aria, Hanna, and Emily at the center of yet another murder investigation. Though the Liars had nothing to do with Charlotte's murder, they were once again the prime suspects for the crime — not only to the police, but to a mysterious force known as Uber A, who is convinced that the girls finally brought down their longtime tormenter. But could Uber A be wrong about more than just who killed Charlotte? A clue from the Season 6 finale suggests that Charlotte might not really be dead, and it could all be a part of an even grander master plan.

So what's the big clue that hints that Charlotte might not really be dead and gone? It all has to do with those creepy, hyper-realistic latex masks we were introduced to in the finale. During the finale, Alison keeps seeing visions of Detective Wilden in her house, and is convinced that she's going crazy. It turns out that gaslighting Alison was the part of a much bigger plan — a plan set up by her own husband, Dr. Rollins. Dr. Rollins was actually wearing an extremely realistic mask of the police officer — one that was so realistic it was impossible to tell the difference between him and the real thing. The masks worked to freak out Ali, but what if they also worked to make it seem like Charlotte was dead?

If we're operating in a universe where it's possible for people to wear masks and assume another's identity, then it's plausible to think that, perhaps, someone dressed up another corpse as Charlotte in order to allow Charlotte to escape Rosewood. After all, it's not like we saw anyone take a really close look at Charlotte's body: for all we know, someone could have planted the body with the Charlotte mask on so the cops would believe that it really was Charlotte who died. We know that Rosewood doesn't have the most reliable medical examiners on the planet, and it wouldn't be shocking for someone to pay for a fake autopsy report on "Charlotte's" death.

If the ultimate goal is to frame the Liars for Charlotte's murder, then perhaps the person who faked Charlotte's death is none other than Charlotte herself. In fact, Charlotte could be working closely with A.D. to make sure that she has total control over the Liars lives — because, really, what better way to control someone then to put them away in prison for life? It's certainly a dark theory, but we should know by now to trust nothing and no one in Rosewood.

More like this
'The Summer I Turned Pretty' Using “Cruel Summer” Has Twitter Begging Taylor Swift To Release A Music Video
By Radhika Menon
Jurnee Smollett’s Heart Is Healing
By Rebecca Carroll
Why Sadie Sink Is Hopeful Max Will Return In Stranger Things Season 5
By Brad Witter
What Working At Marvel Is Really Like, According To A 'Ms. Marvel' Co-Creator
By Gretchen Smail
Get Even More From Bustle — Sign Up For The Newsletter