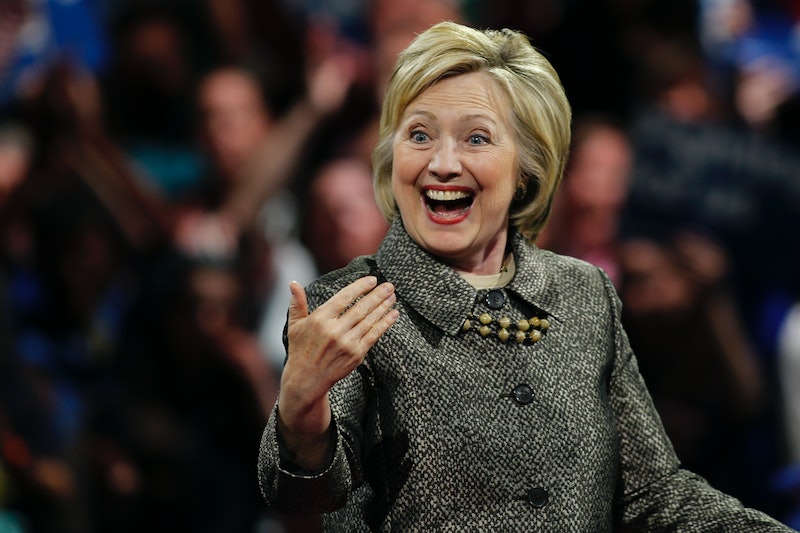 Are you following the Democratic presidential primaries? Are you supporting Hillary Clinton or Bernie Sanders? If the answer to either of these questions is yes, then you've probably spent at least a little time reading about superdelegates over the past few months. You know, those ever-controversial party officials, who're allowed to support whatever candidate they want for the Democratic nomination, regardless of the will of the voters? So, with the primary months slowly winding to a close, how many superdelegates are left for Clinton and Sanders to squabble over?

First things first: There are 712 total Democratic superdelegates (the GOP doesn't have them in quite the same way, which is one big reason why Trump might become the nominee), and the overall delegate threshold to claim the nomination is 2,383. If you manage to reach that number, between both superdelegates and the traditional pledged delegates that are allocated through state primaries and caucuses, then you've made it! See you on Nov. 4.

As it stands now, all the delegate math is cutting firmly in the direction of Clinton, while Sanders' pledged delegate deficit continues to widen ― after his resounding defeats in four out of five northeastern states on Tuesday, he's now down by more than 300. And sadly for Sanders' comeback hopes, that deficit means absolutely everything as far as the superdelegates are concerned.

According to The New York Times, 520 of the superdelegates have already thrown their support behind Clinton, while just 39 back Sanders, meaning there are still 139 of them who're still ostensibly up for grabs. But those figures give a very deceptive impression, at least if you're using recent American political history as your guide. That's because while superdelegates can support anyone in theory, in practice they always end up backing the candidate who leads in pledged delegates ― in other words, they go along with the prevailing will of their electorate, not against it, so to preserve the more democratic outcome.

Indeed, anything to the contrary would be without precedent. Since their introduction to the Democratic primary process in 1982, the superdelegates have never once flipped a race to a candidate who would've otherwise finished second. To this point, most of the complaints about superdelegates hinge on a purely theoretical scenario, that they could hand Clinton the election if she were to fall behind Sanders. But nothing like that has ever happened before.

That's why recent efforts by some Sanders supporters to flip superdelegates are ill-founded, if they're hoping to make a pro-democracy, will of the people sort of argument ― by those standards, Clinton is the undeniable nominee, both thanks to her pledged delegate lead and sizable lead in the popular vote. As such, the answer to "how many superdelegates are left?" is kind of "all of them" and "none of them" at the same time.

If Sanders were somehow able to take the lead in pledged delegates, then they'd almost certainly break to him en masse, handing him the nomination ― in 2008, despite all the brouhaha about whether Clinton's superdelegate support would save her, they lined up behind the rightful winner, then-Senator Barack Obama, just like always. But at this late juncture, that's a virtual impossibility ― as The New York Times' Nate Cohn noted following Sanders' brutal defeats on Tuesday night, he'd now need to win every remaining contest by 30 points to bridge the gap.

So, in the practical sense, none of the superdelegates are really still up for grabs, not in a meaningful way. You'll likely see a handful of them continue to back Sanders, but not in any amount large enough to have any impact on the nomination. For all the controversy, the real contest was always for those pledged delegates ― that's how you win a Democratic primary. And sad to say for the Sanders campaign, they simply couldn't keep it close in far too many states to have a chance.