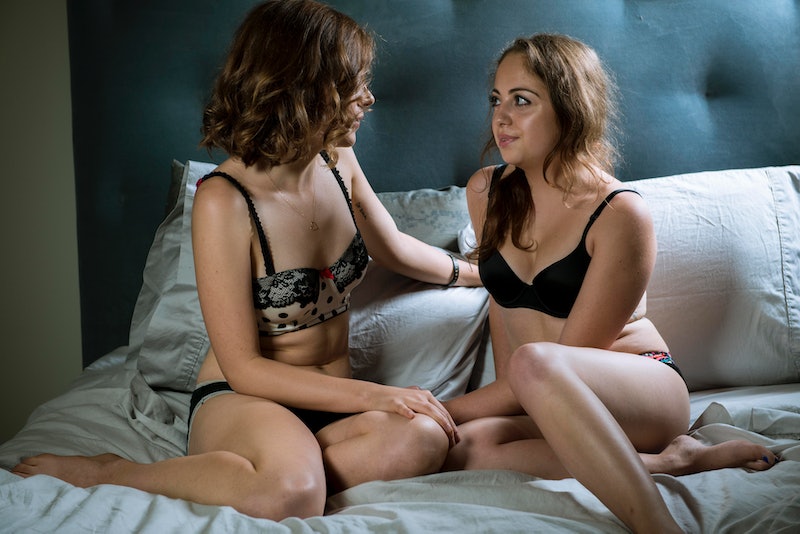 If you're in a place in your relationship where you're wondering whether your boo is cheating on you, you're probably looking for signs everywhere to prove yourself right (or wrong). Maybe you're searching for weird signs that your partner is cheating, or otherwise trying to find evidence of infidelity. And that is totally understandable, though the best way is to just bring it up with them and see what they say. One thing is for sure: Don't snoop on your partner in your quest to find out what's up.

But that place of worrying is a very lonely one, and it can often drive you to search for signs or clues everywhere. Not a great look for anyone. I asked experts to share the most tried-and-true strange signs of infidelity they can think of. While everyone is different, here are some odd flags that might mean your partner is cheating.

Just a note, though: Suspicions are just that, and nothing more. Be sure to have a real heart-to-heart before jumping into conclusions. You know what they say about assumptions. But first, check out the latest episode of Bustle's Sex and Relationships podcast, I Want It That Way:

1. They're More Sexual Than Usual

"Often, when a partner is cheating, they will become more sexual than they have in a long time," BetterHelp telehealth counselor and psychologist Nikki Martinez tells Bustle. But this isn't necessarily about an upped libido. "This is their guilt, and their way of trying to make up for the infidelity, and finding a way to be close to you," she says. "If the quantity and quality of your sex life is suddenly and drastically different, you have to ask yourself why if it is not something you have agreed to actively work on together." Then again, maybe your mate is just in the mood to put in the effort. Again, use your words.

It's not just about sex. "I think the one beginning sign you partner is cheating could be that they are overly affectionate to you," Rob Alex, who created Sexy Challenges and Mission Date Night with his wife, tells Bustle. "If all of the sudden, they start acting totally different in their affection toward you, it could be a sign." Whether it's long, romantic dinners or just a renewed interest in date night, this might be a red flag. "Hopefully, it is just that they appreciate you, but many people report that at the initial stages of cheating, a partner actually becomes more affectionate." The jury is out on this one.

3. They're Hotter All Of A Sudden

"If your partner starts suddenly looking a lot better than he or she used to, they may be cheating," relationship expert April Masini tells Bustle. If they now take more showers and have taken to wearing a new scent, you might have an issue. "Typically, you’ll see a partner who’s cheating adopt a more rigorous grooming routine, a more vigorous workout, and even a different cologne ... They’ll have a little spring in their step that is hard to understand, and they’ll just start looking and smelling better than they have been."

4. They Have A General Behavioral Change

"The all-of-a-sudden change in behavior is one sign," relationship coach and psychic medium Melinda Carver tells Bustle. It might not just be about sex, or about romance, or about grooming or the gym. "Behavior change is a red flag," Carver says. "Most men and women get comfortable in a long-term relationship. They may let themselves go physically or never change their style." If they're going to new lengths to look or act different, you should take note. "When all of a sudden your partner is changing their physical appearance, that is time to look into the why of the sudden changes," she says. Like Masini, Carver says, "People want to impress their new prospective lover, so will go all out on new clothes, makeup or physical conditioning." Rule of thumb: If they look or act different for some unknown reason, you might want to find out why.

5. They're Putting More Effort In

Similarly to Carver's revelations, Cecil Carter, CEO of dating app Lov, tells Bustle that if your partner has been feeling much more motivated to show you how important you are, you might want to see what's up. "It’s weird, but giving more effort without being provoked can be a sign," Carter says. "This may be to overcompensate for something they think they’re not providing in your relationship." Once again, this could also mean something totally different, so don't go nuts quite yet.

Let's say your partner is suddenly trying new things and waltzing around showing how over-the-top happy they are with you, but not actually spending time with you, zen psychotherapist and neuromarketing strategist Michele Paiva tells Bustle. It may be a bleak picture she paints, but it is real, and should be dealt with if it's happening. Not a good scene.

"If your partner all of a sudden becomes overly protective and jealous out of nowhere, chances are they are projecting," life coach Kali Rogers tells Bustle. Maybe they feel guilty about their own dalliances and assume you're doing the same. "If they can violate the trust between you two, then it's only natural for them to assume you could as well," Rogers says. Don't make things worse by snooping, though — address it head-on.

Though there are plenty of weird signs your partner is cheating, if "you can't get rid of that sick feeling in the pit of your stomach telling you that he or she is lying,' it's worth giving things some serious thought, relationship coach and psychic medium Cindi Sansone-Braff, author of Why Good People Can't Leave Bad Relationships , tells Bustle. "Your gut or intuition is really your best indicator that someone is up to no good, but most of us second-guess our gut instincts, or feel that we should give someone the benefit of the doubt." She advises that you trust your intuition.

"Our intuition can pick up on all the subtle clues that we've been in deep denial about," she says. "We might try to ignore that our husband is suddenly using a new aftershave or using a lot more of it." If you're noticing things like that, don't overlook them. "Never doubt the reliability index of your intuition," she says.