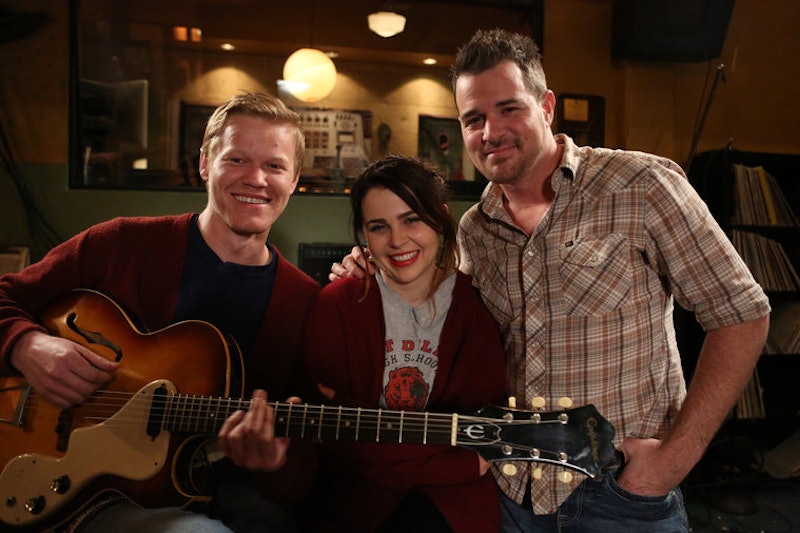 Just hours after revealing the first tantalizing clip of the Friday Night Lights/Parenthood crossover web series, NBC released the full Friday Night at the Luncheonette. As you would expect when two heartbreakingly perfect two shows known for producing intense emotional reactions come together, it delivered plenty of feels.

The premise was simple. Parenthood's Amber gets stuck watching her cousin Max after work on the same Friday night that she let a friend-of-a-friend's band record at the Luncheonette. That band turned out to be Friday Night Lights' infamous Crucifictorious, lead by Landry Clarke (Jesse Plemons). In the middle of the recording session, the band's "road manager" Billy Riggins turns it into a party, and later Landry helps Amber clean up the mess.

But Jason Katims, the writer and executive producer of both series, couldn't let such a long-awaited event be so standard. The 19 minute crossover features a ton of callbacks to Friday Night Lights and integrates the two shows perfectly. Mae Whitman likely deserves some of the credit, since the Parenthood star is also a huge Friday Night Lights fan.

It may not be the movie that FNL fans have been patiently waiting for, but Friday Night at the Luncheonette is a beautiful tribute to the show that we all miss. So beautiful, in fact, that in just those 19 minutes there were so, so many moments that gave us so, so many feels. Get those clear eyes ready, here are all of the moments that made our hearts full.

From its first moment, Friday Night at the Luncheonette hits us with the sentimentality as Amber casually wears an East Dillon Lions shirt. It makes perfect sense that with everything she's been through, Amber would root for the underdog lions over the town-pride Panthers.

First we find out that Amber and Becky know each other, which could be a subtle shout out to them both having dated a character played by Matt Lauria, Luke and Ryan, who both also happen to be in the army. Then, there's Lance. Poor Landry could never get Coach Taylor to remember his real name and apparently Amber has the same problem. Maybe when Crucifictorious makes it big people will realize that Landry is a valid name.

The Success of Crucifictorious

In the years since we last saw them perform, Crucifictorious has become a very professional operation. Not only do they barely need time to rehearse, but we learn that one of their songs was used in a commercial. It was so popular that Landry dropped out of college to pursue his music full-time, and now we can rest easy knowing that he's chasing his dreams, and presumably hasn't killed anyone else.

If there was one character on Friday Night Lights who didn't need any kind of growth, it was Billy. When a group of people ready to party bust into the Luncheonette, you know BIlly is responsible, because that's who he is. Later when we learn that Billy has been traveling with the band because Mindy kicked him out of the house ("don't ever have twins"), we know that they'll be okay, because it's Billy and Mindy. He'll return with some cute souvenirs for the kids and apologize for whatever he did and they'll get back to normal. It's good to know things are exactly how we left them.

It was nice to see that Devin has stayed with Crucifictorious after all of this time, and even better to see her be a great part of the crossover. She gets caught smoking weed by Max, and later is able to teach him what a lesbian is, while avoiding any very specific questions. Devin officially became the crossover MVP when she expressed an interest in Amber, because that might be the best crossover couple of all time.

Well, the second best. Just hearing Tim's name again got us excited, and to hear that somewhere, somehow, he and Amber hooked up was almost too much to handle. Was she in Dillon? Was he in Berkeley? Was it somewhere else completely? We now need a prequel to the crossover that explains this relationship, or we'll spend the rest of our lives wondering. And Landry, the answer is yes.

Landry Getting the Girl

Wait, is this the best crossover couple? Amber might have chemistry with every single FNL character, but her kiss with Landry was the sweetest moment of the entire episode. We've watched Landry chase girls to no avail time and time again, so to see someone as great as Amber return his feelings was indescribably fulfilling. Never give up, Landry.

The Most Emotional Moment in the History of Television

After Devin engaged with some mild flirtation with Amber, Billy started spray painting one of the walls. The episode continues without showing that wall, and you kind of forget about it. Until the last shot.

When those doors close, it's like a sudden shock to your heart. Texas forever. We haven't heard that phrase uttered by a Riggins since the FNL finale, and now, here it is. Permanently displayed on a wall of the Luncheonette. Thank you, Jason Katims, for showing us that as long as we love Friday Night Lights, and it is available on Netflix, Texas really is forever.