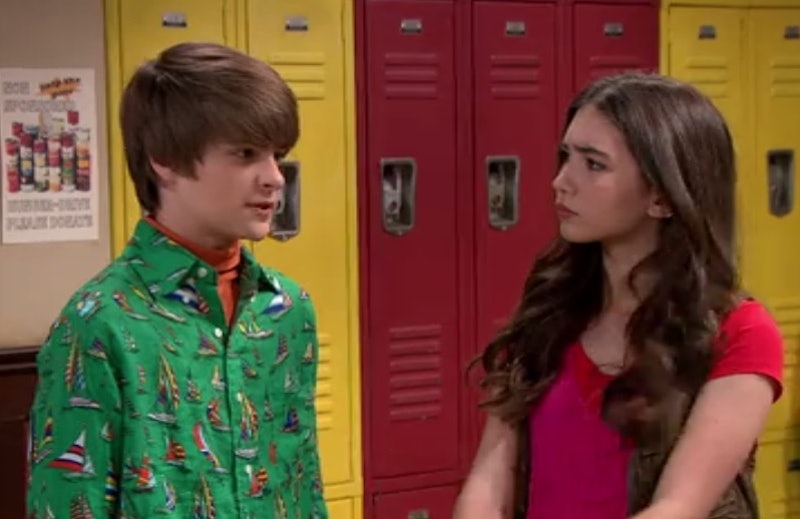 I have tried hard not to fall for any potential Girl Meets World relationship. The Riley/Lucas/Maya of it all is just too stressful for me to contemplate, but while the show focused on the love triangle in Season 2, I somehow found myself falling for Riley and Farkle. When the series started, Farkle's crushes on Riley and Maya were a cute running gag, but as Farkle matured, the more and more he and Riley seemed to click. These two characters get each other on a basic, intrinsic level that is so Cory and Topanga it hurts.

When Season 3 starts, the gang will be entering high school, which can only mean their young love lives will become even more complicated. While I refuse to advocate for any romance destined to cause turmoil for the group as a whole, Riley and Farkle have won my heart. Now that junior high is behind them, the possibility of Riley and Farkle feels much more realistic.

I'm not saying these two should jump into a relationship right away, but I would not be at all surprised if Girl Meets World is slowly building up to a Riley and Farkle romance. These two have endgame written all over them. Don't believe me? Let's examine the evidence.

1. Farkle Has Loved Riley Since They Were Seven

Remember when Cory talked about how he fell in love with Topanga the moment he saw her? That's basically what happened when little Farkle saved little Riley from herself during a game of bobbing for apples gone wrong. Call me a sucker, but the "I loved you since the moment I saw you" trope is one of my favorites.

2. They Understand Each Other's Insecurities

Both Riley and Farkle have dealt with bullying, and in both cases they came to each other's defense before anyone else did. They are both deeply unique people and they know being unique makes them a target, but they also know they can always confide in each other. Riley won't let Farkle feel like nothing and vice versa — it is beautiful the way they build each other up.

3. They Can't Keep Secrets From Each Other

I'm sorry, was I supposed to somehow not flail when Farkle instinctively knew Riley didn't think of Lucas as a brother? These two cannot keep secrets from each other even when they want to and yes, that does make my heart melt.

4. They Call Each Out When They Have To

When Farkle took control of their science project, Riley called him out on it and she did not mince words. Likewise, when she wanted to internalize her feelings for Lucas to keep from hurting anyone, Farkle wouldn't let her. They force each other to grow, even when it is scary, and I love that about them.

5. They Balance Each Other Out

Riley brings the fantastic into Farkle's world of reason, and vice versa. They compliment each other. Riley is all emotion (just like Cory) and Farkle is rational (like Topanga). Together they are unstoppable.

6. Because Pluto Will Always Be A Planet In Farkle's Room

Rational, scientific-minded Farkle keeps Pluto in his planetarium because Riley refuses to stop believing it is a planet. As far as romantic gestures go, that one is right up there with buying someone a back-up hippo... oh wait, Farkle did that for Riley too.

When Farkle was afraid he didn't understand love, Riley was there to make him realize he did. He has always shown her and Maya an amazing amount of love, but he still needed reassurance. Riley gave it to him without question.

8. There Is So Much Hugging

Riley and Farkle hug an absurd amount. Not that I am complaining. because they are basically the dictionary definition of adorable — I'm just saying they hug a lot. They definitely hug more than purely platonic junior high aged friends hug, unless things have changed a lot since my day.

It is not easy to get Riley riled up, but somehow Farkle always manages to do so. There is real fire between those kids when they tick each other off, and nothing says "I love you" quite like "you drive me crazy."

10. They Have A Standing Date With Mars

The most beautiful moment between Farkle and Riley may very well be the moment when Riley wonders if Farkle wants her to get better at science and he responds that he will always want the best for her. As a result they have a standing date to go to Mars together, and I really want to see that happen.

11. Even Charlie Gardner Knows They Are Endgame

Riley and Farkle may be something of a darkhorse couple, but these two are playing the long game. They may not get together this season or the next, but one day they are totally going to realize they are in love.