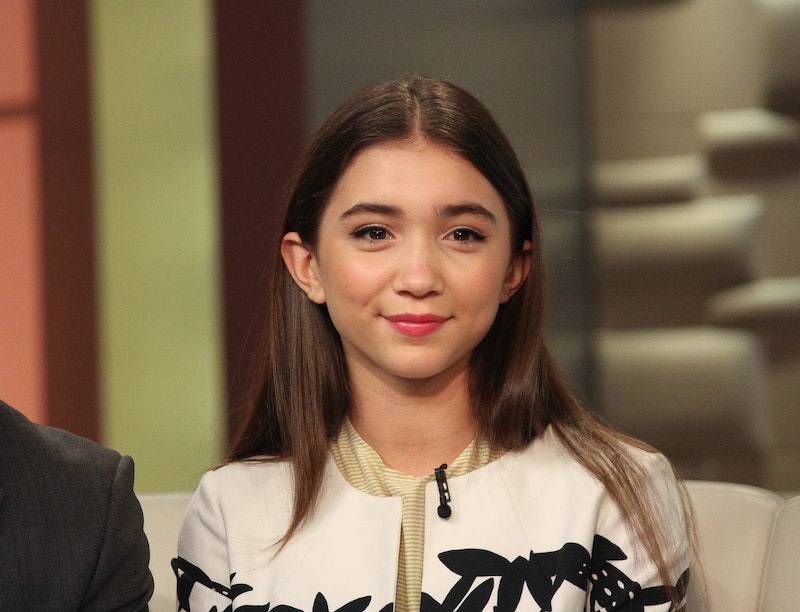 Since Girl Meets World began, Rowan Blanchard has been a revelation, but many of the bright young star's greatest moments have happened off-screen. For instance, 13-year-old Blanchard's stirring Instagram post on feminism and intersectionality showcased the actress' thoughtfulness and eloquence. This young woman is not just a budding TV star, but a smart, strong force for feminism. On Girl Meets World, Riley, the daughter of '90s supercouple Cory and Topanga, has been a consistently bubbly, kind character. Blanchard often comes off like a young Lucille Ball thanks to her gift for physical comedy. Her talent has never been in dispute, but the show doesn't always feel like it is challenging her. Then the Season 2 episode "Girl Meets Riley Town" happened, and Blanchard was let loose. The star showed the audience not only a new side to Riley, but to her abilities as an actress.

"Girl Meets Riley Town" wasn't the first time the show has gotten serious, but it was the first time the writers moved Girl Meets World outside of its comfort zone. The half-hour episode tackled cyberbullying, a subject that is all too painfully real for tweens, teens, and even adults. The anonymity of the Internet has given people a place to spew misdirected anger and hate at their leisure. To see someone as gentlehearted and free as Riley have her safe and happy world threatened by a constant barrage of cruelty was hard enough to deal with, but then Blanchard started crying and I am fairly certain the whole world cried with her.

Blanchard captured the hurt and self doubt Riley was feeling, as well as the sense that the safety of her world had been snatched away from her. When Riley finally confesses to Maya someone is bullying her, Blanchard stands up and begins to recite the words a fellow classmate is sending to her. Riley has always been so secure in who she is, but Blanchard had to believably take Riley to a darker place, a place where she suddenly no longer wanted to be seen. Blanchard, who is so good at being the grinning, lovable goofball that is Riley Matthews, tapped into the sadness and fear the cyberbully inflicted on Riley like an old pro.

When Blanchard started sobbing through her words, there was nothing fake about her performance. It was honest and heartbreaking on every level. I always knew Blanchard could make me laugh, but it wasn't until this episode that I understood she could also make me cry. For her to then turn around and face the bully (who is never seen on camera) by being her kind and sweet self brought the episode and Blanchard's performance full circle.

To be both a gifted comedian and a dramatic actress is quite the feat. To be both at the age of 13-years-old is almost unheard of. Blanchard proved she can carry Girl Meets World wherever it goes in the future. Just as Ben Savage and Danielle Fishel carried Cory and Topanga from childhood to adulthood, Blanchard can show the many sides of Riley as she gets older. Girl Meets World took itself to a new level with "Girl Meets Riley Town" and Blanchard led the charge. I cannot wait to see what the future holds for Blanchard and the series now. Girl Meets World has always been good, but now it is clear there is greatness in the show and its uber-talented lead.