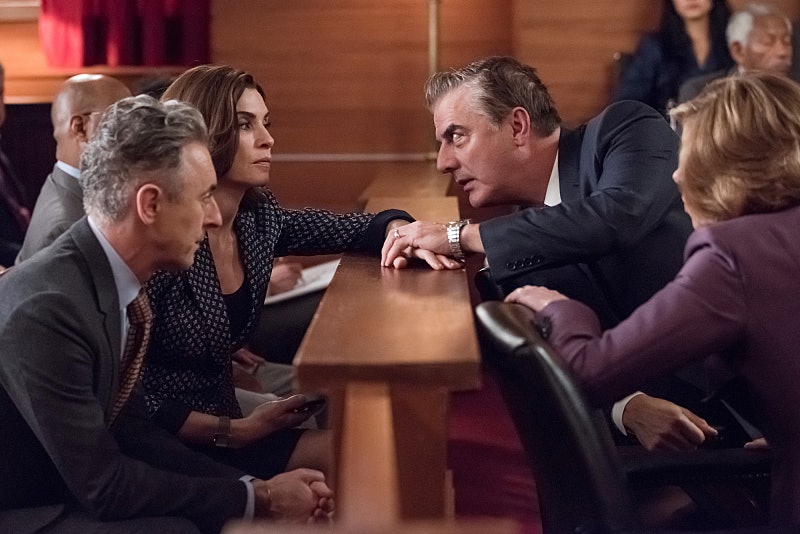 Peter's trial finally began on The Good Wife , and had some not-so surprising repercussions for Alicia's romantic life. Quick reminder of last week's episode: Jason and Alicia agreed that they both wanted to be together, but are on different pages when it came to the nature of their futures — Jason doesn't like being tied down to one location, Alicia has a daughter in high school and a business to run. Peter's trial in "Verdict" only added more complications to their 'It's Complicated' relationship status. With Peter's trial heating up, it actually looks like Alicia's divorce could be on hold on The Good Wife , and that's definitely not good for Jason.

As with everything in Alicia and Jason's relationship, it was two steps forward, one step back this week. First, Alicia told Jason she might need some space to figure out how to navigate his desire for a serious relationship that is also not tied down (in the iconic words of Justin Bieber, what do you mean?). Then, Lucca confronted Jason about his true feelings for Alicia, challenging him flat out to say he wasn't falling in love with Alicia. He tried to brush it off, and he definitely did not take her advice to declare his affections to Alicia. What he did do, however, was tell Alicia that he couldn't investigate on her husband's case anymore. So, OK, maybe it was more like two steps back, one step forward.

The bottom line is this: Jason wants to be with Alicia, but he's also convinced that the future of their relationship is directly related to Peter's trial. If Peter is exonerated, then Alicia will go forward with her divorce and she and Jason can really be together. If Peter is sent to jail, however, Jason is sure she'll put on her "good wife" hat and stay married — a suspicion that might have been confirmed when Alicia pledged to visit Peter in prison if he accepted a two-year deal.

As of now, Alicia's divorce has taken a backseat to Peter's trial for completely rational and understandable reasons, but Jason makes a good point. What if Peter's political troubles are never over? Would Alicia really call off her divorce because Peter needs someone other than his children to visit him in jail? Hopefully, these questions and more will be answered in next week's series finale.