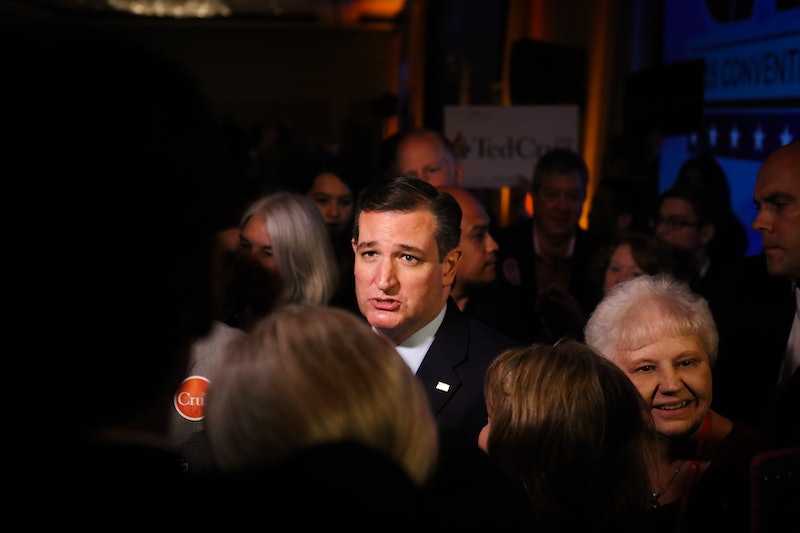 Ted Cruz's game plan has never been to win a majority of the GOP delegates — at least not since the beginning of April when it became mathematically impossible. Since then, his hope has been to force a contested convention. In the perfect world, that would have allowed him to pick up the nomination by cementing support among unbound delegates and then picking up others as they are released in the second and subsequent rounds of voting. It looked like it might work last month — even Nate Silver said so. But now Cruz's support is down among the delegates he needs to do just that.

So far down that even if the race were to reach July in the form of a contested convention, Cruz might not be able to pull off the nomination and save his candidacy. One earlier fear was that an outsider like Paul Ryan or Mitt Romney might walk away with the nomination, despite not having entered the race. Now, though, even a contested convention could end up electing Trump as delegates echo the upper echelons of the party, responding with a resigned shrug to the idea that Trump could be the nominee. More important, they say, is focusing on November.

Jeremy Peters for The New York Times interviewed a number of delegates, both bound and unbound heading to the Republican National Convention in Cleveland this July. They're not feeling Trump fever but they are worried about picking a winner early on to reduce division moving into the general election — even if that means unhappily falling in line behind Trump.

One example Peters lays out is the state of Pennsylvania. Due to weird party rules, 54 of the state's Republican delegates are not bound to one specific candidate. Instead, they were directly elected off the ballot and are able to vote as they see fit at the convention — therefore they became a target of the Cruz campaign. He had 69 people targeting these folks and of the 54 elected, only three are Cruz votes. Ouch!

The same thing is happening in North Dakota. The delegates there are also unbound because the state didn't have a presidential preference vote. The Cruz campaign claimed to have won a majority, but Peters found that there were maybe only 12 to begin with and some of those are reconsidering. One North Dakota delegate, Jim Poolman, explained to Peters what he's thinking, "I'm not in the anybody-but-Trump campaign. I'm in the anybody-but-Hillary campaign." He still plans to vote for Cruz but that could change. He has another priority that comes before defeating Trump:

My goal, personally, is to not let our convention become a circus.

So by applying Maslow's hierarchy of needs to the GOP convention, Trump may just prevail. Basically, there's not time to worry about him when the whole party is on the verge of imploding, and this is great news for Trump if he doesn't get the delegates he needs Tuesday in Indiana or underperforms in California. Even polls hint that a majority of Republicans think Trump should get the nomination even if he ends primary season with just a plurality of delegates.

That might just invalidate Nate Silver's prediction that Cruz would benefit from a contested convention. Back in April, an outright Trump win seemed much more remote than it does now and Cruz was more popular with the delegates chosen at county and state conventions. July is still months off, so we could be looking at a different political environment completely. After all, who knows what Trump may have said by then. It's a complete guess. But if his resurgence continues, you might be voting against Trump come November.