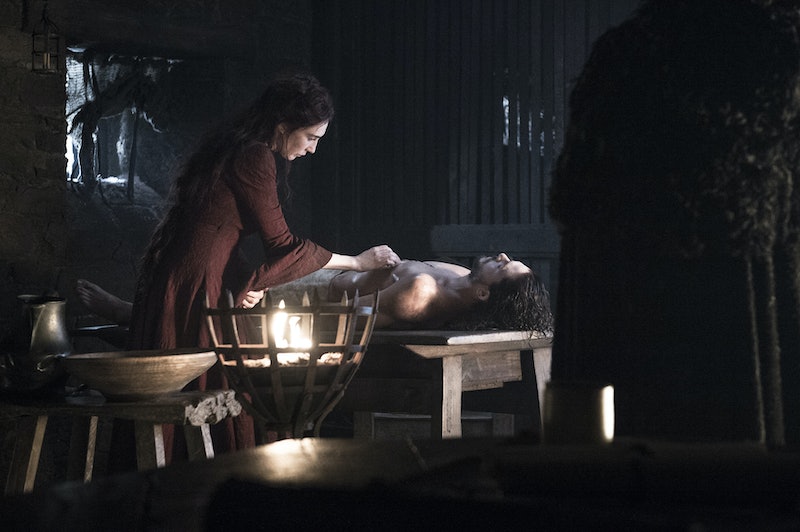 Unless you've managed to avoid all social media platforms over the last 14 hours, you know by now that Jon Snow is alive on Game of Thrones , thanks to a spell that Melisandre performed over his then-dead body. But as for how Melisandre's spell resurrected Jon Snow, that part still remains a bit of a mystery. You see, if it was just the spell itself, you'd think the effects would've happened instantly. But instead, it wasn't until Melisandre and Davos left Jon Snow alone, believing that the attempt had failed, that he truly came back to the land of the living. Was this just for dramatic effect or does this implicate that something else, aside from the spell, played a part in the Lord Commander's return?

Given all of the unusual screen time Jon's direwolf Ghost has received throughout these last two episodes, one could conclude that the animal is also partially responsible for the resurrection in some way. When Jon Snow was first killed, many believed that he potentially warged into Ghost while he lay dying on the ground. That could still very well be true. Perhaps it just took the combined efforts of Melisandre's spell and Ghost's presence to bring him out of his warg state and back to his original body.

Granted, for now this is all just mere speculation, but you can't deny that Ghost has been very protective of his master's body, even more so than you would expect. It's almost like Ghost knew that there was a chance Jon could be saved. Was that simply due to direwolf loyalty or was a piece of Jon Snow lying in wait inside the animal itself? Game of Thrones is no stranger to dabbling in mystical elements (remember the smoke baby and the larger-than-life dragons?), so it's not as if this idea is totally out of the realm of possibility.

But, of course, this theory isn't the only option out there. It's possible that Melisandre's necklace could be the main cause of why the spell worked after all. Given the Red Woman's transformation upon taking it off, I'd say there's a good chance the necklace is able to harness a great deal of power. Enough to be more than capable of bringing someone back from the dead if the right incantation is spoken. It's also worth noting that Melisandre was once quoted in George R.R. Martin's novel saying:

Stannis Baratheon is Azor Ahai come again, the warrior of fire. In him the prophecies are fulfilled. The red comet blazed across the sky to herald his coming, and he bears Lightbringer, the red sword of heroes.

Could it be possible that the "red comet" she refers to is actually the red gem on her necklace? She's wearing it while performing the spell over Jon's body, so in a way it would've blazed across the sky from his perspective. So if you're one of the many people who believes that Jon Snow's resurrected form will become Azor Ahai, then this theory is sure to add further fuel to that fire.

But regardless of how it all actually came to be, I think we can all agree that we're just beyond thrilled that it happened at all. We've been predicting this moment since Day 1, but after 10 long months of refuted sentiments, it's nice to finally get some validation. The night may be dark and full of terrors, but at least we've now been given a beacon of hope.