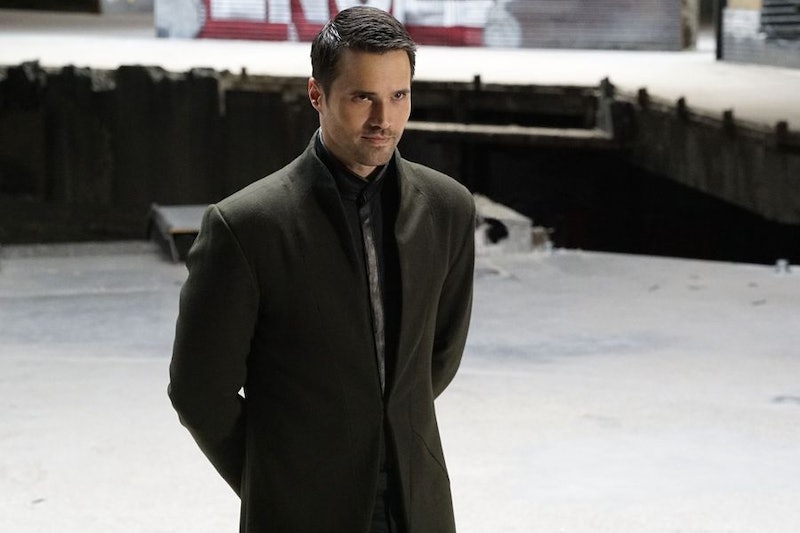 There has been a lot of talk lately on ABC's Agents Of S.H.I.E.L.D. about the Kree. The monolith was a "Kree weapon"; the mysterious object Hive and Daisy unearthed last week was a "Kree artifact"; and this Tuesday's episode, "Failed Experiments," looks to continue the references to this obscure alien race. While the press release for the episode teases that, "Coulson and his team race to combat Hive's control over the Inhumans as their enemy's deadly plan for the human race is revealed," the cast list includes a couple of guest stars credited as "Kree reapers." So, what exactly are Kree? And why are they so important to Agents Of S.H.I.E.L.D.?

Unless you've been a lifelong reader of Marvel comics, or have devoted a not-insignificant amount of time to plumbing the depths of Marvel Cinematic Universe arcana, then this is probably a question you've asked yourself at least once while watching S.H.I.E.L.D. But now that the Kree will officially be making an appearance this week, the question has become more relevant than ever. Thankfully, I'm here with your handy dandy Kree cheat sheet to fill you in on everything you know, didn't know, or forgot you knew about this Smurf-colored race of extra-terrestrial beings.

When the Kree reapers are introduced this week, it won't be the first time we've seen actually members of the alien race on the show. The first time we encountered one, we didn't even know what it was; way back in the Season 1 episode "T.A.H.I.T.I.," Coulson discovered that the serum used to revive him was extracted from the corpse of a blue alien.

The next time we met a Kree was in the Season 2 episode "Who You Really Are." His name was Vin-Tak, and he was sent to Earth to hunt down Inhumans after the Diviner was activated. Fortunately, Heimdall saw the alien travel to Earth and dispatched Lady Sif to apprehend the intruder before he could kill anyone.

2. We've Met Them Elsewhere In The MCU

S.H.I.E.L.D. isn't the only franchise in the Marvel Cinematic Universe that has dabbled in Kree mythology; the blue-skinned aliens were also the primary antagonists of 2014's Guardians Of The Galaxy. In that film, radical militarist Ronan the Accuser declared war on the planet of Xandar, headquarters of the Nova Corp, unhappy with a truce that had previously been made between his people and the Nova Empire.

To this end, he allied himself with Thanos, who promised to destroy Xandar for him if Ronan stole the Orb for Thanos. But when Ronan learned that the Orb contained an Infinity Stone, he betrayed Thanos and took the Stone for himself. However, when he tried to use it to destroy Xandar, he was defeated by the Guardians of the Galaxy.

The Kree were first introduced to the pages of Marvel Comics in 1967, in an issue of The Fantastic Four. Millions and millions of years ago, the Kree were discovered by another alien race called the Skrulls when the peaceful, space-faring Skrulls happened upon their home planet, Hala. Hala was home to both the Kree and another intelligent race, the Cotati; in order to determine which race was "worthier," the Skrulls enlisted 17 members of each race, took each party to a distant moon, and left them to their own devices for a year.

After a year on their moon, the Cotati had built a lush garden; the Kree, who had been taken to Earth's moon, had built a massive and technologically advanced city. However, when the Skrulls declared the Cotati the winners, the Kree were enraged. They wiped out every last member of the Cotati race and declared war on the Skrulls. The Kree-Skrull war has been one of the longest-standing conflicts in the galaxy since.

4. They Created The Inhumans

In order to aid them in their never-ending war against the Skrulls, a faction within the Kree began conducting secret genetic experiments on various alien races throughout the galaxy. Unfortunately, these experiments failed for every species they were conducted on and, when the rest of the Kree found out what this faction was up to, they sent an army to Earth to shut down the experiments.

The Kree faction left Earth defeated, thinking their experiments had once again failed… not realizing that they had finally succeeded, leaving their genetic code mingled inside some alien/human hybrids that — when exposed to the Terrigen crystals — would transform into the superpowered beings we know as Inhumans.

5. They Hate The Inhumans

The Kree at large mistrust the genetic abominations that are the Inhumans. When they learned of their existence, they sent a Kree weapon to Earth in an attempt to wipe them out: the Monolith, an artifact that would transport them across space to the far-flung exile planet Maveth. But when an Inhuman named Alveus, created by the Kree faction to lead their army, became too powerful and fearsome to control, the Inhumans and humans had to band together to use the Monolith to banish him from Earth.

Eventually, the Monolith fell into the hands of a secret society who devoted themselves to retrieve Alveus from Maveth. Over the centuries, that society grew and adapted into it morphed into the evil Nazi organization known as Hydra. In Season 3, they were finally successful in using the Monolith to bring Alveus — now known as Hive — back to Earth.

In this sneak peek of "Failed Experiments," it's revealed that the Kree artifact kept by James and unearthed by Hive and Daisy is some sort of a beacon that, when activated, summons the Kree reapers to the deserted town bought by Hive on last week's episode. But if the Kree hate Inhumans, then why does Hive — the ultimate Inhuman — want to bring them to Earth? If he can use his powers to mind-control Inhumans (who are, after all, part Kree), does that mean he can do the same to actual Kree?

Hopefully this week's episode of Agents Of S.H.I.E.L.D. will fill in even more of the backstory between the Kree and the Inhumans — including what exactly Alveus wants from these so-called reapers.