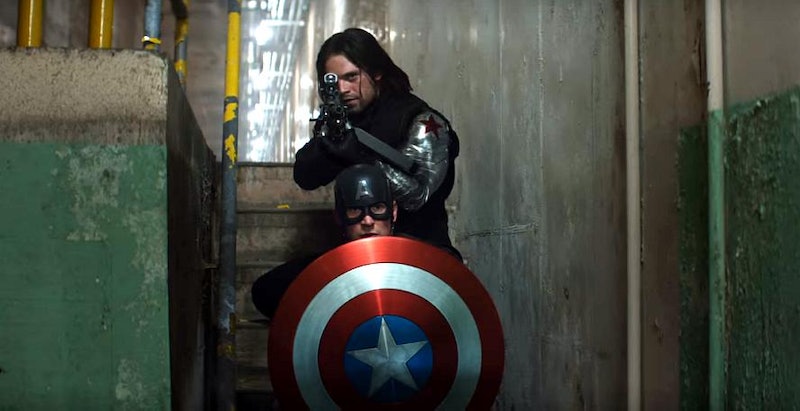 The most obvious answer is because he was programed to do so. When Bucky was found by Hydra after falling into a freezing river during World War II, he was rebuilt and reprogrammed into the killing machine known as the Winter Soldier. He is activated after hearing a certain sequence of code words, and when operating as the Winter Soldier he has no control over his actions other than to accomplish his objective, whatever that may be. And on one dark day in 1991, that objective was to intercept a car, retrieve a package from within, and kill whoever was inside the vehicle. The driver and passenger happened to be Howard and Maria Stark, and they met their demise at the end of a metal fist. But why were they targeted by Hydra?

If you recall, Howard Stark was one of the founders of S.H.I.E.L.D. He was present at the creation of Captain America, he invented Cap's vibranium shield, and he basically had a hand in every major technological development made by S.H.I.E.L.D. for about 40 years. So clearly, he's no friend of Hydra. However, when the Winter Soldier was sent on the mission where he ended up killing the Starks, it wasn't supposed to be an assassination. He was told to eliminate all witnesses, and that's why he killed Howard and Maria, but his ultimate task was to steal whatever it was they were transporting. So what was it?

Howard Stark was transporting vials of Super-Soldier Serum. Similar to the type that was used to enhance Captain America. The original Cap formula has been lost to time, which resulted in an arms race between S.H.I.E.L.D. and Hydra to replicate the formula and ended up creating guys like the Hulk. Hydra plans on using this stolen serum to build an army of Winter Soldiers to take over the world, and they do so, cryogenically freezing them for use at a later date.

So really, the reason why Bucky killed Tony Stark's parents is because Hydra wanted to recreate Captain America on a large scale. And as you would expect, Tony Stark isn't very happy when he learns the truth.