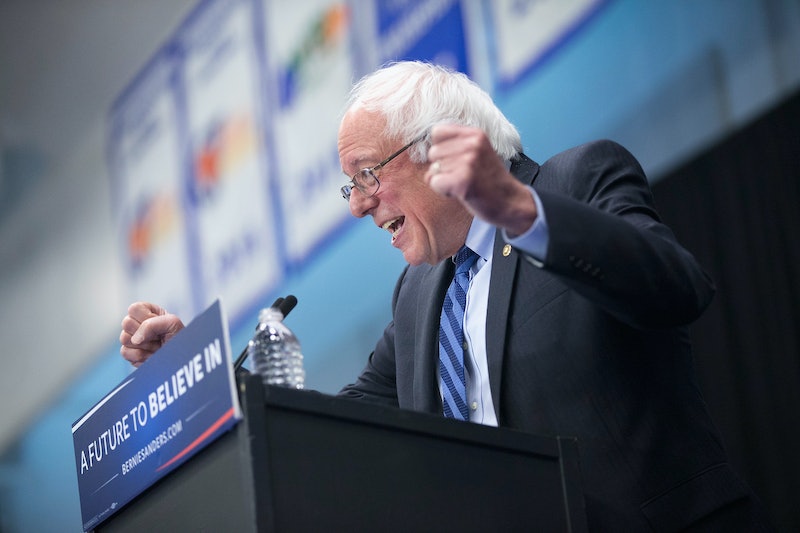 Since the early stages of his campaign, Bernie Sanders has been described as a feminist, thanks to his focus on an array of diverse social issues such as race, gender, and socio-economic class. This particular trait, in fact, has set him apart from rival Hillary Clinton, whose campaign is built on the more traditional form of the feminist movement that prioritizes gender alone. And don't be mistaken — their varying forms of activism for women don't make either of them a better or worse feminist, as Madeleine Albright once tried to suggest. They're simply different. Sanders isn't a woman, but he's certainly a feminist in his own right.

As TIME magazine's Charlotte Alter pointed out, Sanders's intersectional version of feminism has an appeal that's ultimately contributed to his mass support among millennials and college students. In this arena, he even has an advantage over Clinton. Though the former secretary of state has won the overall women's vote by large margins across the board, most of that support comes from older women over 45 years of age.

Like Clinton, Sanders speaks out against the gender wage gap and vehemently supports reproductive rights. He's also tied other issues such as the minuscule minimum wage, family leave, universal healthcare, social security, gay marriage, LGBT rights, and child care services into the feminist mix. Back in February 2012, Sanders wrote an article for The Huffington Post titled "United Against the War on Women" that demonstrated his inclusive umbrella approach to the movement.

These next several memes prove that women's rights supporters are convinced and that Clinton isn't the only feminist in the game.

1) Calling Out The Haters

2) Rosie The Riveter Has A New Look

5) Jane Sanders Has Her Own Supporters Too

6) An All Around Fun Snapshot

8) On Immigration Reform And Women

9) On Being One With Mother Nature

More like this
How To Fight For Reproductive Rights, Based On How Much Time You Have
By Courtney Young
Sandra Bullock, Girlboss Extraordinaire
By Matt Harkins & Viviana Olen
LGBT+ Men Fleeing Afghanistan Were Denied Asylum By The Home Office, New Findings Show
By Sam Ramsden
Lydia Leonard Is Setting The Record Straight
By Olivia-Anne Cleary
Get Even More From Bustle — Sign Up For The Newsletter