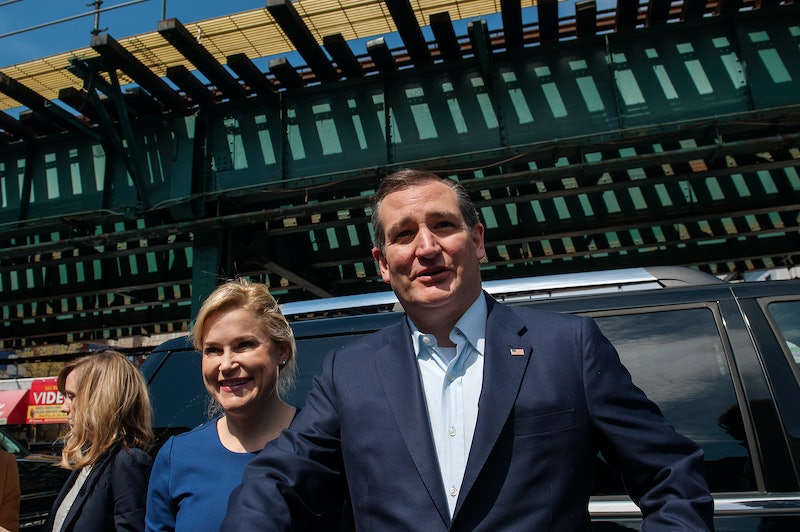 I felt a disturbance in the force the minute I woke up on Monday morning — though I didn't know what it was, I could just feel that something beautifully, cosmically rewarding was coming. It wasn't until the afternoon revealed that Heidi Cruz finally responded to those Zodiac Killer rumors about her husband, presidential hopeful and angry right-wing word cloud come-to-life Ted Cruz. It's a moment that countless lovers of The Most Perfect Internet Joke have been waiting for — and, honestly, it couldn't have gone down in a more perfect way.

The beloved "Ted Cruz is the Zodiac Killer" comments made the rounds among viral news sites and Twitter feeds before finally crossing into the mainstream when Larry Wilmore started riffing on Cruz at the White House Correspondents' Dinner Saturday night. I had a feeling that the Wilmore's jokes would probably inspire some kind of response from the Cruz camp, but I never imagined it would add yet another layer to this conspiracy. In an interview with Yahoo News, Heidi Cruz addressed the stabby, shooty, code-writing, police-mocking elephant in the room:

Well, I’ve been married to him for 15 years, and I know pretty well who he is, so it doesn’t bother me at all.There’s a lot of garbage out there.

As many have pointed out: This is, first and foremost, not an outright denial. It's also exactly what the wife of the Zodiac Killer would say when publicly confronted with the chilling truth.

I'd say it's like a plot straight out of a Lifetime movie or a Shakespearean drama or Dexter — only no one could ever accuse Cruz of being charismatic or even vaguely like Michael C. Hall. Can one ever truly know the person they've laid with for 15 years? Can widespread conspiracy theories trump a love forged on a marriage bed of chunky Campbell's soup cans and bureaucratic dildo-hate?

But, honestly, all glib jabs aside: How can anyone botch something as simple as denying that your husband (born in the middle of the Zodiac's reign of terror) is a notorious mass murderer? Knowing full well the way the media loves this joke and the way the joke thrives on minor verbal slip-ups, a response of "I know who he is ... it doesn't bother me at all" is almost too perfect, too open-ended to be an accident. For me, I can't help but think it's either proof that the Cruz camp is so desperate to hold on to headlines that they're willing to let this joke drag on a silent cry for help from Heidi. Or, maybe, a mix of both.

Obviously, I've had Dashboard Confessional's "Vindicated" playing all morning to accompany the sound of my witch-like cackling. What a day. What an election. What a life. Aside from the prolonged exposure to pictures/discussions of Ted Cruz, this is the ideal start to my morning.

More like this
Gillian Anderson's New Netflix Drama Is *Nothing* Like 'Sex Education'
By Frances Stewart
Matt Hancock’s TikTok Is The Most Matt Hancock Thing Ever
By Sam Ramsden
You’ve Got 'Love Island’s Farmer Will All Wrong
By Jack Orenstein
Eurovision Has Been Given A Whole New Look Ahead Of Its Liverpool Debut
By Bustle UK
Get Even More From Bustle — Sign Up For The Newsletter
From hair trends to relationship advice, our daily newsletter has everything you need to sound like a person who’s on TikTok, even if you aren’t.