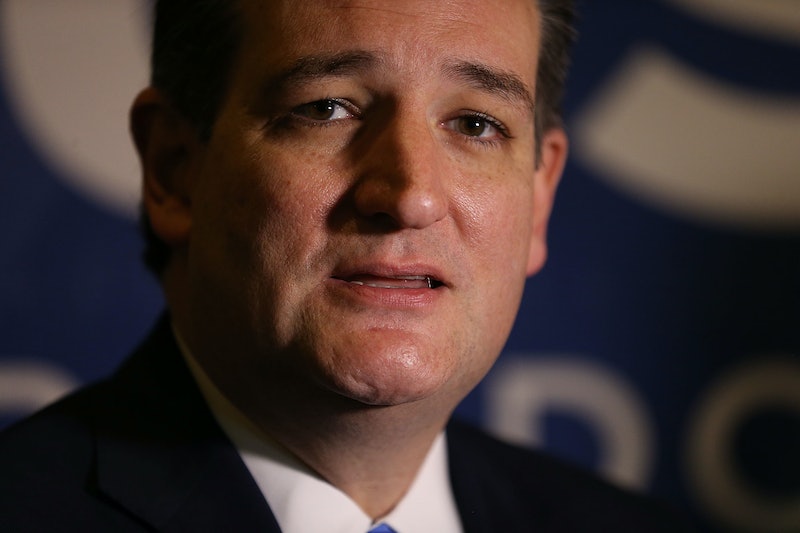 The world stands divided into two camps: those who are aware of the now-infamous "theory" that Sen. Ted Cruz is the Zodiac Killer and those who are sleeping on it — two houses, both alike in dignity. However, that second camp got significantly smaller after Saturday night's White House Correspondents' Dinner after host Larry Wilmore launched into a rapid fire roast of the Texas senator and wannabe-GOP nominee that totally blew up his creepy, creepy (and maybe even murderous) spot.

"You know there's this joke going around the internet that Ted Cruz is actually the Zodiac Killer. Right? I'm not making that up," Wilmore says with a smile. (And, no. He's really not.) "Come on, that's absurd," he continued: "Some people actually liked the Zodiac Killer."

But the joke didn't end there. Wilmore used Cruz' reputation as "the Zodiac Killer" — delivered with an impossibly giddy emphasis — to explain his failure to pick up delegates in New York, why former Speaker of the House John Boehner comparing him to Lucifer and why Cruz brought home a bizarre quantity of Chunky soup after his honeymoon. While that in itself makes for a delightful two and a half minutes of comedy, the bit is made even better by the fact that it totally inches the "Ted Cruz is the Zodiac Killer" joke/theory to it's ultimate goal: Forcing Cruz to acknowledge and/or deny it publicly.

If you too are deeply and emotionally invested in the cause of seeing Ted Cruz sweat his way through a press conference, forced to laugh off this "theory" (in between back-pedaling on his dildo stance and insisting that he knows how to pilot his human suit) or, better yet, seeing him finally snap and deny the accusations, you're probably still basking in the afterglow of Wilmore's jokes. After all, this could be the major event that makes what was once a simple pipe dream into a truly gratifying grand finale to this horror movie clown parade of an election; it could be the moment that makes the Cruz camp say "I guess we actually need to acknowledge this..."

Watching a joke forged in the fires of #WeirdTwitter cross the great technological divide to reach the masses (to that scary place I call "the outer-net") is a pretty epic feat on its own. But for that joke to be elevated from the fringes to reach the eyes and ears of C-SPAN's audience — a demographic that arguably doesn't know that they're not supposed to put a "the" in front of Twitter — and some of the most prominent political and social influencers of our country? It's truly a nourishing and redemptive use of the internet and we're all the better for it.

More like this
'Heartstopper’s Joe Locke Wants To Be Disney’s First Gay Prince
By Sam Ramsden
Watch Benedict Cumberbatch Lead An ‘SNL’ Medieval History Lesson On Roe v. Wade
By Grace Wehniainen
Michigan’s Governor Is “Going To Fight Like Hell” To Protect Abortion Access
By Andrea Zelinski
How To Fight For Reproductive Rights, Based On How Much Time You Have
By Courtney Young
Get Even More From Bustle — Sign Up For The Newsletter