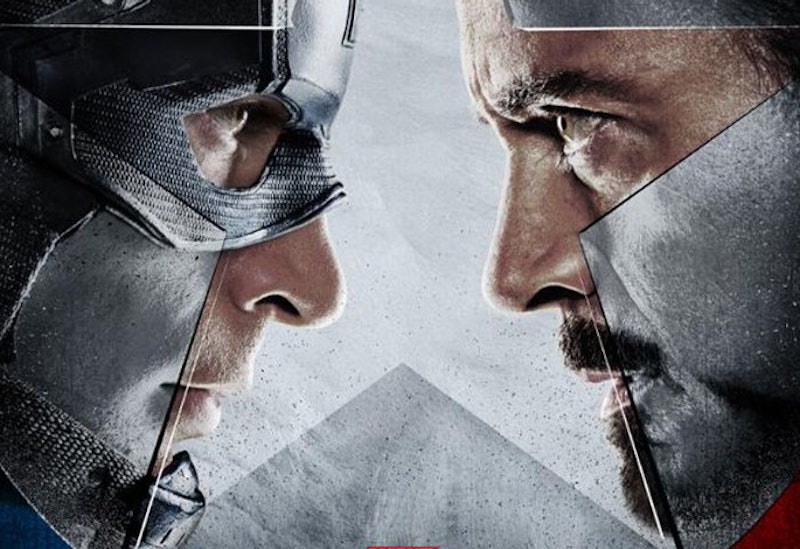 Of all the pop culture shout-outs you would expect to find in a Marvel movie, ones mentioning the "trial of the century" would probably not make the list, and yet in Captain America: Civil War , an O.J. Simpson reference does manage to make an appearance. Yes, really — during a scene mid-way through the new movie, one major character brings up Simpson (or, more accurately, the LAPD detective who had a major role in the trial, Mark Fuhrman). It's not exactly the kind of shout-out you'd typically expect to hear in a superhero movie, but Civil War isn't exactly your typical film.

The line comes when Team Cap has been arrested for helping Bucky, aka the Winter Soldier, evade capture from the police. While the members of the group — including Scarlet Witch, Falcon, Hawkeye, and Ant-Man — are imprisoned, Iron Man, who's on the government's side, walks by them and starts asking questions about where Bucky and Cap, who have managed to escape, have gone. Yet Falcon isn't having any of it — and so Cap's righthand man tells Tony, "You'd have to go Mark Furhman on my ass to get information out of me."

It's a pretty surprising quote, especially because of how timely it is; while the Simpson trial happened back in the '90s, Ryan Murphy's recent miniseries American Crime Story: The People Vs. O.J. Simpson has brought the events back into the spotlight. Audiences today will certainly recognize the name Mark Fuhrman and appreciate the shout-out, especially coming from a place as unexpected as a Marvel-made blockbuster.

The Simpson trial reference isn't the only amusing shout-out made during Civil War; there's also an — intentional or not — reference to a pivotal Batman v. Superman scene in which the titular heroes stop fighting because the name "Martha" has been uttered (in the Civil War version, it's the name "Sarah" that causes a ceasefire of sorts). But it's the Fuhrman reference that will likely amuse, and certainly impress, audiences the most.