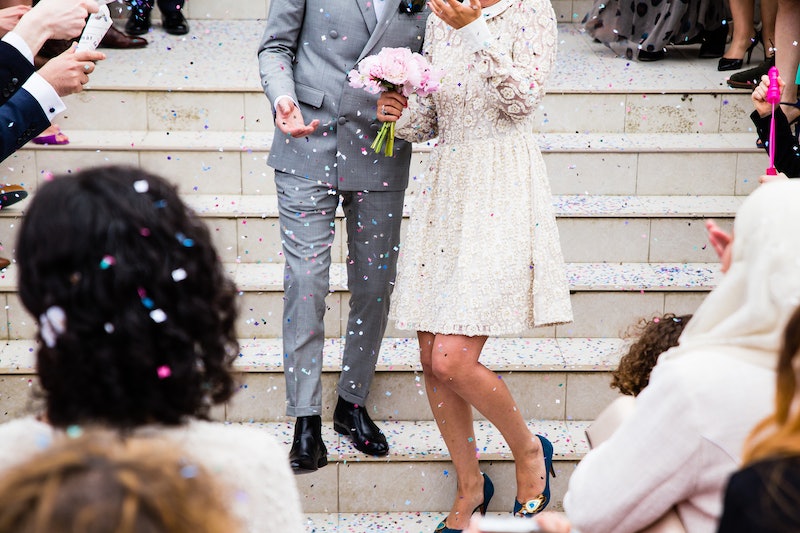 We all know that brides are “supposed” to wear something old, something new, something borrowed, and something blue on their wedding days — but why? Where do wedding superstitions come from in the first place? British jewelry company Royal Antique Jewelry recently dove into the history of wedding superstitions — and luckily for us, they kindly assembled the results of their research in a handy-dandy infographic. If you’ve ever been curious about some of the weirder quirks that accompany many modern weddings, prepare to have your mind blown.

As is the case with so many wedding traditions, some of the superstitions featured on the infographic have… uh… troubling origins. The whole thing where, in heterosexual relationships, the groom doesn’t see the bride before the wedding, for example? That one isn’t really about it being “bad luck.” It goes back to an era when arranged marriages were much more common; since a marriage was essentially a business transaction, with the woman being the item to be exchanged (siiiiiigh), the fear was that if the groom met the bride beforehand and didn’t like what he saw, the wedding would be called off.

I know. That makes my feminist heart sad, too. We may still have a long way to go for gender equality, but at least we’re not at that point anymore, right?

These days, of course, it’s become more about the idea of good versus bad luck; furthermore, not setting eyes on each other before the ceremony begins adds a certain air of excitement to the proceedings. But a lot of couples are now choosing to eschew the tradition, which is also pretty cool — “first look” photography sessions shot before the ceremony have become something of a growing trend, for example, and of course there’s absolutely nothing that says you can’t just do whatever you like, “tradition” or “superstition” be damned. What to get ready in the same room together? Go for it. Just running down to City Hall for the first available opening? All you. It’s your marriage, so whatever you say goes.

Check out more surprising origins of other wedding superstitions in the infographic below.