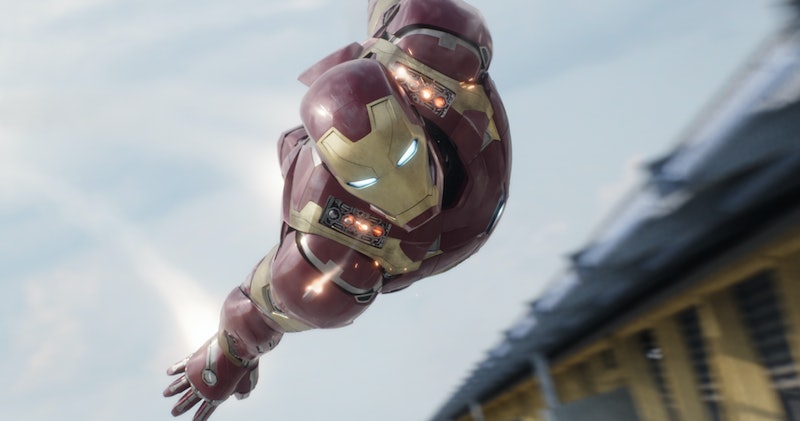 When it was first announced that Marisa Tomei would be playing Aunt May in the new Spider-Man movies, many people were skeptical, to say the least. Tomei is 51, and in both the comics and original Spider-Man films, Aunt May was supposed to have been in her 70s or 80s. In the first Spider-Man trilogy, she was played by Rosemary Harris, now 88; in the second series, she was played by Sally Field, 69. Understandably, the casting of Tomei, who's much younger than her predecessors, caused some controversy — yet even if you're firmly on the "she's too young for the role" side of the debate, you'll likely appreciate one side effect of the casting: that in Captain America: Civil War , Aunt May and Tony Stark flirt. A lot.

Yes, really: although it might seem hard to believe, Aunt May and Tony kinda have a thing going on in Civil War. It's just a casual flirtation, and it's pretty unlikely that they're about to become the Marvel Universe's hottest new couple. Still, when you see the movie, it's clear that there's something between the two characters. It becomes evident when Tony visits May's Queens apartment, in order to convince her nephew, Peter, to fight on his side in the big battle between Team Iron Man and Team Captain America. When Peter arrives home, he's shocked to find his idol, Tony, casually sitting on his couch, in the middle of talking to his aunt. He's even more taken aback to see that the two adults are flirting; when Tony makes a comment about how young May is ("It’s hard to believe she’s anyone’s aunt"), Peter looks as confused and grossed-out as you'd expect any teenager to be in that situation.

It's a pretty funny scene, and a sly nod to the casting controversy surrounding Tomei as Aunt May. It's also a sweet ode to the previous on-screen relationship between Tomei and Robert Downey Jr., in the 1994 rom-com Only You; in that film, the two actors develop a romance, only to be derailed by complications before (spoiler alert!) eventually being brought back together. That movie trivia alone would make the Civil War flirtation seem especially sweet — but what makes it even sweeter is that around the same time as Only You, Tomei and Downey Jr. were dating in real life. The duo have stayed on good terms long after their breakup, with Tomei telling The Daily Beast in 2014 about her ex, "For someone who is that unique to have that kind of mainstream success is amazing in these franchise films, and he deserves it because he’s one of the best."

It's great to see that Tomei and Downey Jr. are on such good terms post-breakup that they can joke about an on-screen romance between them, especially because the flirtation between May and Tony could potentially turn into something more in 2017's Spider-Man: Homecoming. Could that movie bring the duo together as a legitimate couple, or will they just continue to flirt and make Peter completely uncomfortable? Who knows, but either way, it's a win-win for fans.