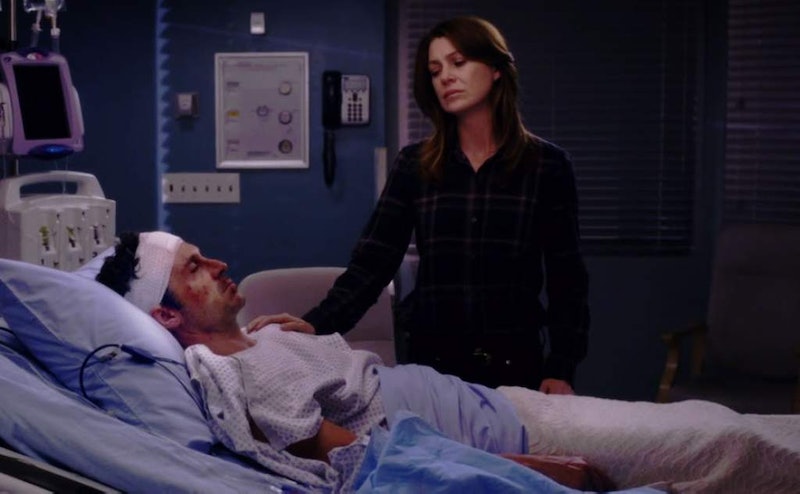 Jimmy Kimmel has high hopes for the fates of posthumous Grey's Anatomy characters. That is — he thinks there might still be a chance for them to return to the show, if show runners and writers are taking notes from the (spoiler alert) latest plot twist in Game of Thrones. You know, the one where Jon Snow comes back from the dead. On Monday night, the late night host re-imagined what a Game of Thrones inspired Grey's Anatomy episode might entail, which to him meant bringing back one very missed character.

Unfortunately, the highly skilled docs at Grey Sloan Memorial Hospital were unable to save Derek Shepherd after a tragic car accident in Season 11. However, as Kimmel's faux promo makes abundantly clear, they didn't have Melisandre — the red priestess of R'hllor — to help out. You know, in case they wanted to request a resurrection. If Melisandre paid a visit to the operating room, maybe Derek and Jon Snow could share similar fates.

This got me thinking, as Grey's has killed off so many of it's beloved characters, Derek Shepherd shouldn't be the only one who makes his return to the show (I'm still speaking in terms of wish fulfillment here). And hey, maybe Kimmel's fake promo video isn't so far off from being prophetic. Like, it could happen... right? Watch the promo below and decide for yourself.

And, now, an incredibly important list of the other characters who should absolutely be brought back from the dead on Grey's a la Jon Snow. Just in case some show execs are out there listening.

Meredith's little sister wasn't exactly easy to like at first, but as the show progressed her character become irreplaceable. Then, all of a sudden, she was gone. And from a plane crash? So random. So heart breaking.

The one-two punch. First Lexie in the plane crush, then the painfully handsome Mark Sloan after the plane crush. Once we thought we were in the clear with him? Ouch.

He was a main character! Remember this was back before it became status quo for main characters to be killed off, so it's fair to say that his death was particularly devastating and unexpected.

The original heartbreaking death. Before we had learned to guard our hearts and souls from the imminent possibility that at any point in time, beloved characters could be ripped away from us. Thinking about Denny's death will never make me not cry.

Allr ight so I know it seems weird to include a dog on the human list, but come on. When Meredith and Derek put Doc down, don't tell me you didn't shed a single tear.

Rest in peace. Or come back to the show. Whichever. (Please come back though, really.)

More like this
Meet The New Team Of Residents Joining 'Grey's Anatomy' In Season 19
By Brad Witter and Sophia Moore
Gwendoline Christie’s Partner Is Part Of Royal Family History
By Parry Ernsberger and Sophie McEvoy
Does 'Locke & Key’s Ending Mean There Could Be A Season 4?
By Sophia Moore
'The Simpsons' Will *Finally* Address How They “Predict The Future”
By Sam Ramsden
Get Even More From Bustle — Sign Up For The Newsletter