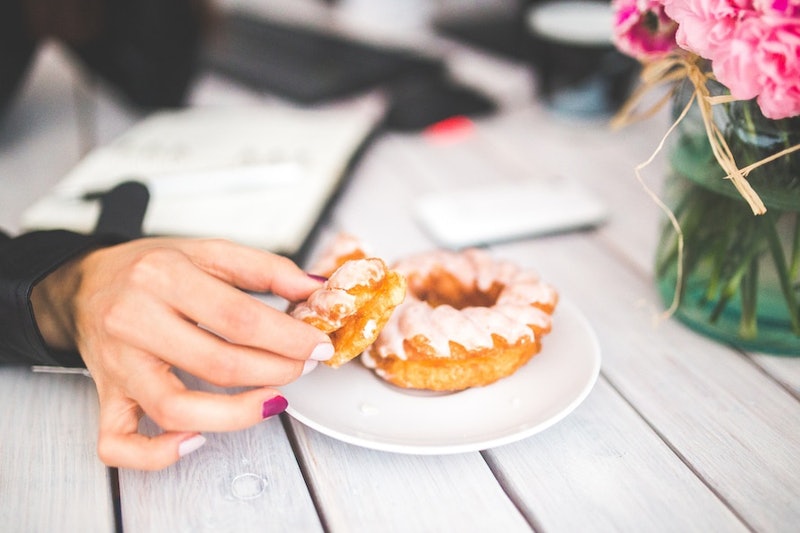 If you're like me, then you totally appreciate a good snack. Oh, and a good meal. And maybe dessert afterward, too. But sometimes the entire world starts to look like a buffet, and you may start to wonder why you're always so hungry.

Now I'm not talking about the occasional hunger pang that pops up a few times a day. That's completely normal, and expected. What I'm talking about is that nagging, craving sort of hunger that never goes away. You know, the one that sends you prowling into the kitchen at 2 a.m., or hunting through the communal fridge at work.

To better understand the enigma that is hunger, I reached out to Lauren Minchen, a nutritionist on GoodLooks. She says, "The shift from satiety to hunger is a complex process that involves hormones, brain chemicals, and signals between the brain and the rest of the body ... In general, it takes about 20 minutes after becoming full for your brain and intestinal tract to adequately communicate about your satiety."

If you ate a balanced, nutritious meal, it should last you about three to five hours, depending on its size, Minchen says. At that point, you'll feel hunger pangs, a decline in energy, and a feeling of emptiness in your stomach. Of course, this can differ from person to person due to other things, such as diabetes or hormonal issues.

Basically, hunger is a varied experience for everyone. There really isn't a "normal," and it's important to keep that in mind when addressing your insatiable appetite. But to better help you pin down your specific cravings, check out more reasons below for why you might be a total snacking machine.

1. You Crashed Your Blood Sugar

If you have a donut for breakfast, and then absolutely crave another one an hour later, you could be experiencing a sort of false hunger brought on by messed up blood sugar. As Minchen explains, excessive sugar intake can cause a blood sugar crash after an initial spike, often stimulating the feeling of hunger. "This is your body's way of trying to increase your blood sugar to balance the drop, but you may not actually need more food," Minchen added. Next time, try eating more protein to even things out.

2. You Aren't Getting Enough Sleep

Ever polish off an entire bag of candy after a poor night's sleep? That sugary desire may have been due to your body's desperate attempt to wake up. As Esther Crane noted on Health, "After poor sleep, you're more likely to have serious fatigue and brain fog. Your system, desperate for a shot of energy, triggers cravings for sugar carbs, even if you're not actually hungry." Try going to bed earlier, and getting a full eight hours, to prevent feeling so run down.

3. You Have A Super Fast Metabolism

Turns out the faster your metabolism, the more fuel you need, noted K. Aleisha Fetters on WomensHealthMag.com. Having a fast metabolism might mean you're burning 100 to 400 extra calories a day, which could totally explain your constant need to eat.

4. You're Experiencing A Craving

If you can't stop thinking about something specific, like pizza, it could be a craving that's to blame. As Minchen explains, "True hunger generally manifests in the feeling of an empty stomach, hunger pangs (this can mean you've actually waited too long to eat), or a slight drop in blood sugar (not as severe as what is described above). A craving is typically a drive for a particular food, rather than a general need for nourishment." Definitely something to keep in mind the next time the munchies strike.

5. You Aren't Handling Your Emotions

If your life is an emotional rollercoaster, you may find yourself trying to fix the ups and downs with some comfort food. "For a lot of people, emotions such as stress, sadness and anxiety affect hunger. Some people's appetite reduces and some people's goes sky high," said Alice Howarth on GlamourMagazine.co.uk. If it's the latter, look for ways to deal with your emotions so you can start feeling better.

6. You Have Too Much Stress

In the same vein as the emotional roller coaster, stress can really mess with your body's signals. According to Crane, "When you're tense, your system ramps up production of the stress hormones adrenaline and cortisol ... Elevated levels of these hormones trick your system into thinking it's under attack and needs energy, so your appetite starts raging." Try calming yourself down with some deep breathing, yoga, or meditation. It'll help you relax in no time.

7. You're On A Restrictive Diet

Crash dieting may be a tempting prospect, but too strict dietary changes will probably leave you feeling oh so very hungry. As Minchen says, "... a restrictive diet can be deficient in needed calories for nourishment ... and a particular diet may be lacking in essential vitamins and minerals for general health." So steer clear of any diet that eliminates an entire food group, or cuts too many calories. They're hardly ever a good idea.

8. You Are Actually Dehydrated

Hunger and dehydration are pretty difficult to distinguish. In fact, it's so tricky that a study in the journal Physiology & Behavior suggested people inappropriately respond to thirst over 60 percent of the time by eating instead of drinking, noted Olivia Tarantino on EatThis.com. It has to do with a mix up in the hypothalamus, which regulates both feelings. So if you just can't feel satisfied, try drinking a glass of water.

9. You Confused Your Bod With Alcohol

Sipping on a cocktail while eating dinner can cause quite the mixed signals in your body. According to Crane, a small study published in the journal Appetite found that people were more likely to consume foods higher in calories after drinking alcohol. "And because booze dehydrates you, it can trick you into thinking you need food when your body is really calling for water," Crane added. Yet another reason to sip on water whilst at the bar.

10. You Aren't Getting Enough Nutrients

If you are snacking all day, but still feel hungry, it may be that you're focusing on quantity instead of quality. As Tarantino said, "It's not calories that satiate your hunger, it's nutrients: fiber, protein, and healthy fats." Make sure you're getting all three in your meals.

11. You Are Exercising More Often

This one makes a lot of sense, because if you're expending more calories at the gym, then you'll obviously need to make up for the loss at your next meal. The same goes for any lifestyle change that uses up more calories, including breastfeeding, Minchen says. Keep yourself feeling well-nourished by eating healthy, nutrient-rich foods.

If you are feeling hungry, then by all means snack away. However, constant hunger and endless cravings can quickly get out of hand, and become downright annoying. Make sure you're always eating enough, and eating the right things, and you should start to feel much better.