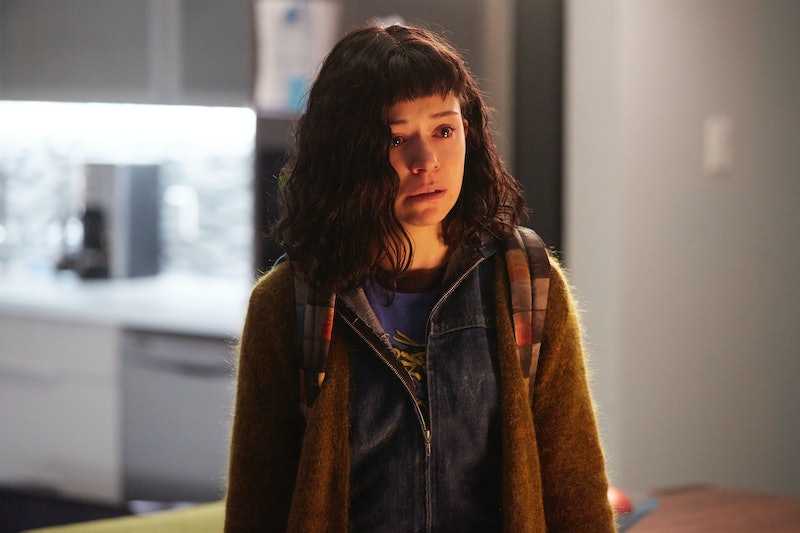 Remember back at the beginning of Season 3 when we were all obsessed over solving the mystery of "What is Helsinki?" on Orphan Black ? The name of the Finnish capital city was ominously uttered by several members of Dyad, including Rachel and Delphine, and seemed to be code for "kill all the clones." Apparently whatever went down in Helsinki involved the murders of six clones — along with the deaths of 32 innocent bystanders. Well, apparently Topside "cleaner" Ferdinand wasn't as thorough as he thought, since Orphan Black Season 3 revealed M.K.'s backstory and it turned out she was actually a survivor of that fateful event.

That wasn't the only twist involving the show's newest clone, either. The reason we learned her backstory was because she betrayed Sarah — it turns out M.K. is far more interested in her own personal vendetta against Ferdinand than helping her fellow sestras. Ferdinand had agreed to help Sarah find someone to extract the maggot-bot from her cheek, if Sarah in turn agreed to help him track down Rachel's location. Knowing that M.K. is an expert hacker, Sarah sent Rachel's message (which had been sent to her by Ferdinand) to the clone, hoping M.K. would be able to find the kidnapped former CEO of Dyad.

However, instead of using the message to track Rachel as requested, M.K. used it to track Ferdinand. She summoned the cleaner to Beth's apartment by posing as Sarah and, once there, trapped the killer in a chair rigged with a bomb that would explode if he stood up. She then surrounded him with candles and started splashing him with gasoline… and probably would have ignited him on the spot if Sarah hadn't shown up in the nick of time.

The most devoted members of Clone Club already had a peek at this backstory, thanks to the Orphan Black comic book published between seasons. The series introduced readers to a new clone named Veera Suominen, who happened to meet Rachel when they were both young girls — the reason Rachel became self-aware in the first place. Veera was present in the lab during the explosion that supposedly killed Rachel's parents, which left one side of her face badly scarred. Unhinged, Rachel blamed Veera for surviving while her parents died.

Veera eventually tracked down five of her fellow clones (including Niki, who would become her best friend) and filled them in on the secret of their origins — until Rachel sent Ferdinand to murder them all. Veera managed to escape with her life, but vowed to exact revenge on those responsible for her friends' deaths. If readers had a hunch that Veera and M.K. were the same person, that hunch was confirmed this week when it was revealed that Veera took the nickname "M.K." from a portion of the serial number assigned to her by Dyad.

Now that Veera has betrayed Sarah and her plan to kill Ferdinand has been thwarted, it's unclear what's next for the character. Will she now forever be an antagonist to our main group of clones? Or is there some way that Veera and Sarah will be able to mend fences and work together to bring down Neolution? We'll have to wait and see…