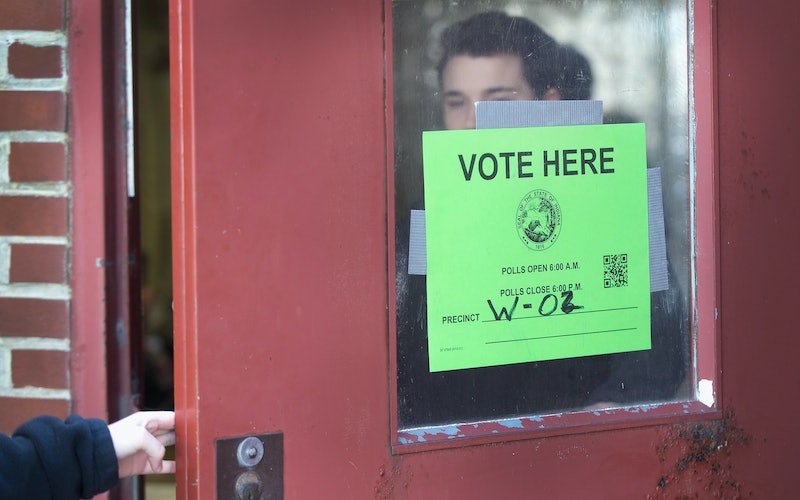 Indiana may be a late-to-vote state, but its results were incredibly pivotal for both the Republican and Democratic Parties on Tuesday evening. Hoosiers must have known it too, because voter turnout remained steady in Indiana, especially among those who voted conservatively. In addition to the turnout, the state also saw an even more impressive uptick in the number of registered voters in the months leading up to the primary.

According to the Pew Charitable Trusts, over 90,000 Indiana residents logged into the state's official online registration site in the week leading up to the registration deadline. In the 2012 primary, only 6,500 people registered online during that same week, putting the sharp increase into perspective. State election officials project the 90,000 log-ins represent less than 40 percent of total registration activity. Many others either registered online or through the mail. Needless to say, Hoosiers were eager to vote.

Slightly more than 37 percent of the eligible voter population decided to participate in the primary during the 2016 primary elections. According to the Green Papers, at the time of writing, 1,106,874 people voted for a Republican candidate and 637,034 voted for either Hillary Clinton or Bernie Sanders. Indiana's Secretary of State reported that as of January 2016, 4,634,149 residents were registered to vote. In 2008 — the most recent time an incumbent didn't run for office since 2016 — voter turnout was roughly 40 percent. Given national data on the turnout in primaries versus the turnout in general elections, a higher percentage of voters are expected to visit their polling places in November.

Though online registration spiked and voter turnout remained stable, some counties reported having trouble at the polling locations. Certain neighborhoods even reported have less voters than they expected. Overall, the results from county to county were difficult to predict because of this inconsistency.

On Tuesday, Indiana's polls opened up at 6 a.m. ET and closed 12 hours later. The Indianapolis Star‎ reported that some voters were likely deterred after meeting locked doors and empty polling sites. In an interview with the publication, Hancock County Clerk Marcia Moore described having technical issues with software and mentioned having to oversee poll workers who "did things in the wrong order." Still, some areas, such as Zionsville, experienced intensely long lines and an unexpected surge in turnout.

In the end, Indiana's voters chose Donald Trump and Bernie Sanders. The GOP frontrunner and presumptive nominee received over 53 percent of the vote and effectively inspired runner-up Ted Cruz to drop out after the results were announced. Sanders's 6 point win was also an upset for Democratic frontrunner Hillary Clinton, but he still has a long way to go before he's able to catch up with her delegate count. Looking forward, the California primaries on June 7 will be most pivotal for the candidates.

More like this
TikTok Is In Its Elle Woods Era
By Meguire Hennes
Everything To Know About 'RHONJ' Season 13
By Brad Witter and Jake Viswanath
Samsung Just Dropped 2 New Foldable Smartphones
By Michelle Toglia
Why Virgo & Libra Can Make A Great Couple, According To Astrologers
By Kristine Fellizar
Get Even More From Bustle — Sign Up For The Newsletter