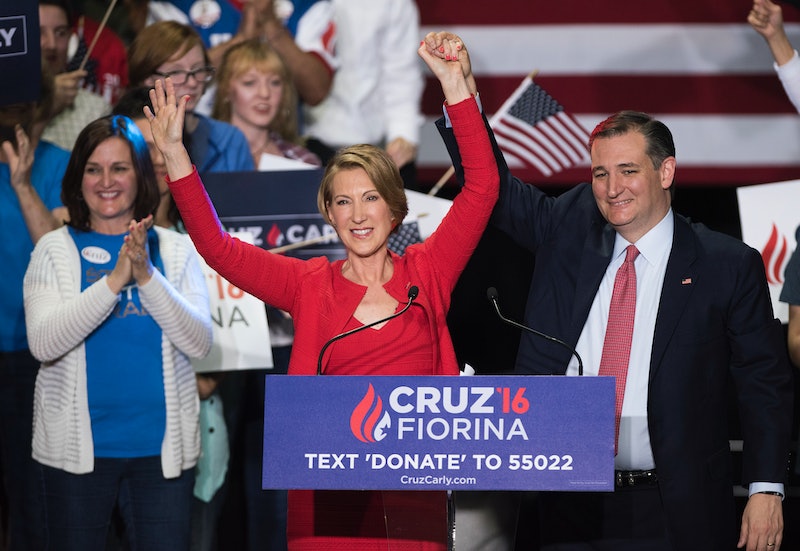 On April 27, Ted Cruz announced that, if elected GOP nominee and eventually president, he would choose Carly Fiorina as his vice president. Less than a week later, Cruz dropped out the race, rendering her White House dreams painfully short-lived. For Cruz, picking a female running mate was strategic in the battle against both Hillary Clinton, who is the only woman running for president, and Donald Trump, who has made inappropriate comments about women. During his big announcement, Cruz highlighted how she, as a woman, had met struggles as a woman in the business world.

Carly is brilliant and capable, and yet she experienced the hardscrabble world of being a female professional. Over and over again, Carly has shattered glass ceilings. But in addition to being a woman of extraordinary experience, she's also a woman of deep principle.

But, both Cruz and Fiorina knew that Indiana would be the moment of truth for their dream team. If Trump could win the winner-take-all state, his path to the nomination would be a piece of cake. Furthermore, the possibility of a contested convention — which stood as Cruz and John Kasich's only hope in defeating the billionaire — would nearly disappear. Unfortunately for them, Trump ultimately beat Cruz by 17 points. Two days before the primary, Cruz spoke in the Hoosier state during a rally and implied Trump was "evil."

I believe that the men and women gathered here and the goodness of the American people, that we will not give into evil but we will remember who we are and we will stand for our values.

As Kasich would probably say, the Hoosiers turned to the fabled dark side. Though the Ohio governor has refused to step down, Cruz and Fiorina have called it quits but have yet to support a Trump nomination. As they say, it was good while it lasted. For your amusement, here are 13 things that are longer than Fiorina's being veep:

I hate to go there, but we all need to accept it.

It's not all that big to begin with... and pretty soon, it's just plain gone.

Anyone who watches Broad City knows she'll do anything to leave her office.

She filed for divorce 72 days after their marriage.

It basically doesn't ever happen. He may be nice, but that doesn't change the fact he's holding Chris Christie (and now his wife) hostage.

On average, a gnat dies between three and five days after reaching its full level of maturity.

Whether you're reading The Great Gatsby or watching one of the two films, their inability to be together is heartbreaking. The bad timing is simply tragic.

Don't mess with the queen.

Ye is usually pretty proud of himself.

11) You Giving Up Dessert

When the ice cream steps foot out of the freezer, it's over.

12) A Trial-Size of Designer Eye Makeup

When you run out of that little free tube of mascara and realize you've seen the light and can never go back to affordable makeup.

Yep. Melisandre brought him back.