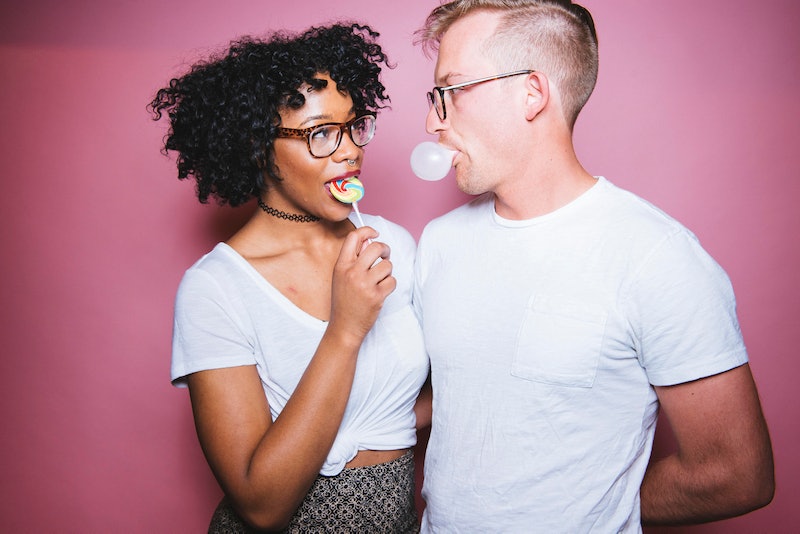 It’s hard to tell just by looking at someone whether or not they’re good in bed. Looks don’t mean a thing when it comes to bedroom skills and I think it’s pretty much a given that egomaniacs and narcissists are totally selfish in the sack, too. However, there's no hard scientific research that says yes, a person that does XYZ and looks like XYZ will totally be amazing in bed. That’s just not how life works.

If you look to some relationship experts, weird signs that show people, men specifically, are good in bed can range from the fact that he bites his nails to his “loopy handwriting” to the fact that he easily succumbs to road rage. While these are interesting thoughts, how they have anything to do with what goes down in bed doesn't add up. If anything, someone who easily gets pissed off while in traffic is not the type of person I want to have sex with or even date, for that matter.

But there are a handful of weird, somewhat obscure signs, that can give you a heads up as to whether someone is good in bed or not. There's no guarantee, of course — and we all have different sexual tastes and desires. Here are nine weird things to keep an eye out for when looking for a good lay. But first, check out our video on sex positions to last longer in bed:

Eye contact is everything. From the moment you first meet someone to the moment you get into bed with them. If they can keep eye contact, they're engaged and paying attention to you. Who doesn't want that in bed?

According to a 2013 study by Alan Hirsch, M.D., neurologist and psychiatrist at the Smell and Taste Institute in Chicago, those who prefer coffee ice cream make for great lovers. “They aren’t concerned about the future and thrive on the passion of the moment,” says Hirsch. And we all know that being good in bed means being totally in the moment.

3. They Have A Bunch Of Books In Their Place

We can thank legendary filmmaker, John Waters, for this important point: “If you go home with somebody and they don't have books, don't f*ck them.” What does that mean exactly? People who love to read yearn to explore other worlds, get lost in other dimensions, continue to learn, and grow as human beings. This is someone you probably want in your bed.

Studies have found that fear is a natural aphrodisiac. Whether that fear comes from sky diving or walking across a rickety bridge in the middle of the Amazon, the feeling that comes with it is quite a turn-on. That being said, those who are adventurous and love to take risks are likely to be better in bed, because they live for being thrilled — and scared a bit too.

Food and sex go hand-in-hand. Research has found that romance isn’t very appetizing when you’re hungry and when you’re first in love, you’re not so hungry because you’re full of love… or more specifically phenylethylamine and norepinephrine, which lessen our need for food because we’re too high on being in love thanks to these chemicals.

There’s also the fact that one who’s passionate about food eats slower, so as to enjoy every bite. According to Candida Royalle, producer of femme-friendly adult films, this is a good sign: "If someone eats slowly, it's likely that they like to make love for a long time.”

According to anthropologist, Dr. Helen Fisher, how someone dances can definitely be a big sign about how they might be in bed. As Fisher told Men’s Health, "There is a certain amount of dance to copulation. And dancing is energetic, which suggests someone who's in good shape. But I think what's really going on is that dancing indicates someone who's social and self-confident." Which brings me to…

If someone is confident in their own skin outside the bedroom, then you know they’re sure as hell confident inside the bedroom, too. The only thing that can mess that up is if they brag — especially about how good they are in bed. No one who is good in bed brags about it. It just doesn’t happen.

8. They Know How To Take It Easy

Although Dr. Fisher used the example of older women being more relaxed than younger women, therefore making them better in bed, the relaxation element can play in most people's favor. Anyone who’s relaxed is more likely to have a good time, orgasm more easily, and be a great sexual partner. We already know that stress and anxiety are bad for your sex drive.

According to a 2014 study by LELO, when it comes to sexual satisfaction, 86 percent of left-handed people reported being “extremely satisfied" sexually, while only 15 percent of right-handed people could say the same. Although the reason for this isn’t exactly clear, the fact remains that lefties live in a sexually satisfied world and that's a world you probably want to live in, too.