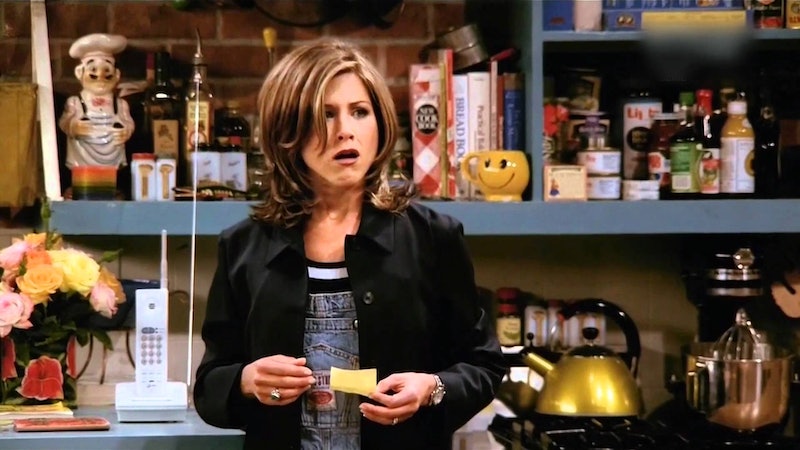 The '90s are pretty mind blowing. When you tell people who never experienced dial up internet, or hair mascara, or Tragic Kingdom about the '90s, their minds are usually and rightly blown. But what about your brain? What about your fond '90s memories? Don't they deserve the mind-blowing treatment that is only reserved for people hearing stories about the glory days of the '90s? Well, hold onto your hats because your head is about to explode. As it turns out, there's a bunch of great trivia about the '90s you probably didn't even know — and when you hear it, you're going to be surprised, impressed, and, of course, attempting to keep your brain inside your skull.

Culture in the '90s was unlike anything we know now, and so much of it is etched into our memories with the kind of nostalgia that only true '90s children really understand. But as much as you love '90s culture, you might not know some of the amazing stories behind your favorite things from the '90s. Sure, you know they happened or existed, but you might not know their secret stories. Behold: here are some cultural facts from the '90s that will absolutely blow your mind.

1. When Disney's Beauty And The Beast Was Released In China, Jackie Chan Voiced The Beast

In 1991, Beauty And The Beast was released in China, and the Mandarin dub starred Jackie Chan as the Beast. He even sang!

2. Choker Necklaces Were Originally A Way To Identify Prostitutes

Chokers became popular in the '90s (and are making a huge comeback right now), but what you might not have known back then, or even now, is that chokers were originally used to identify prostitutes in the 1800s. And before that, in the 1700s, they were worn by French Revolutionaries as a way of paying tribute to the executed dead.

That's right. The haircut you printed a photo of and took to your hairdresser in the hopes that you could look that cool was actually the bane of Jennifer Aniston's life. In an interview with Glamour Magazine , Aniston said, "I was not a fan of the 'Rachel.' That was kind of cringe-y for me." It's a truth bomb no '90s child ever wants to hear.

If you've ever wondered how the band name *NSYNC was coined, you can thank J.T.'s mom. Mother Lyn came up with the name by putting together all the last letters of each boys name. And here you were thinking that it was a word play on "in sync" all this time!

5. Julia Louis Dreyfus Might Have Been Mia Wallace In Pulp Fiction

It's hard to imagine Pulp Fiction without Uma Thurman's IDGAF Mia Wallace, but the part was, allegedly, first offered to Julia Louis Dreyfus, who had to turn it down due to her Seinfeld commitment.

Power Rangers is pretty fairy floss and campy when it comes to violence, but as it turns out, the show still managed to offend enough that it was banned in New Zealand, despite a lot of it being filmed there. New Zealand banned Power Rangers in 1993, because it was "too violent".

7. Britney Spears' Love Interest In The "...Baby One More Time" Video Was... Her Cousin

Mull on that for a moment. Queen Britney's first single and to this day, one of her most recognizable hits, and maybe even one of the best pop songs EVER (yeah I said it), starred her cousin, Chad Spears, as her love interest in the video. He was a model, sure. But he was still related to her.

8. The T.Rex In Jurassic Park Was Voiced By A Jack Russell Terrier

In the original Jurassic Park, the sound of the T.Rex was made by a tiny Jack Russell Terrier. Sound designer Gary Rydstrom got the inspiration from the animated T.Rex being very "doglike, especially when it grabs the Gallimimus and the lawyer and shakes them to death. Every day I would see my dog playing with the rope toy and doing exactly that, pretending like he's killing his prey," he told Vulture. So he recorded his dog, slowed it down, and voilà! Dino-sounds!

9. Will Smith Turned Down A Role In The Matrix To Do ... Wild Wild West

Apparently, when he was offered the role of Neo in The Matrix , Will Smith turned it down because he didn't "get" the movie. And then he made Wild Wild West instead. Hindsight's 20/20!

10. Hanson Have Their Own Brand Of Beer, Try To Guess What It's Called...

Your favorite '90s boy band, responsible for the hit "MMMbop," now have a beer brand called "MMMhops". An original way to hold onto the glory days.

11. Macaulay Culkin Became The Highest Paid Child Actor Of All Time With My Girl

Culkin was the first child actor to be paid one million dollars for a movie, and that movie was My Girl in 1991. If you can stop yourself from crying every time someone says "Macaulay Culkin, My Girl," then that's pretty mind-blowing.

12. Someone Spiked The Titanic Crew's Food With PCP

I bet you didn't know that around 80 cast and crew members on the set of Titanic had their food spiked with PCP while filming, did you? The infamous incident happened when a suspect lobster chowder made everyone on set who ate it experience hallucinations, anxiety, and sickness.

More like this
Lotus Biscoff Does A Biscuit-Chocolate Hybrid Now
By El Hunt
Revisit 1992’s 'A League Of Their Own Cast' Photos After The New TV Series
By Grace Wehniainen
At 28, Lesley Manville Was Acting, Picketing, & Singing Kate Bush Songs
By Olivia-Anne Cleary
Reese Witherspoon Gave Fans Hope For 'Legally Blonde 3' After This Surprising Movie Inspired Her
By Jake Viswanath
Get Even More From Bustle — Sign Up For The Newsletter