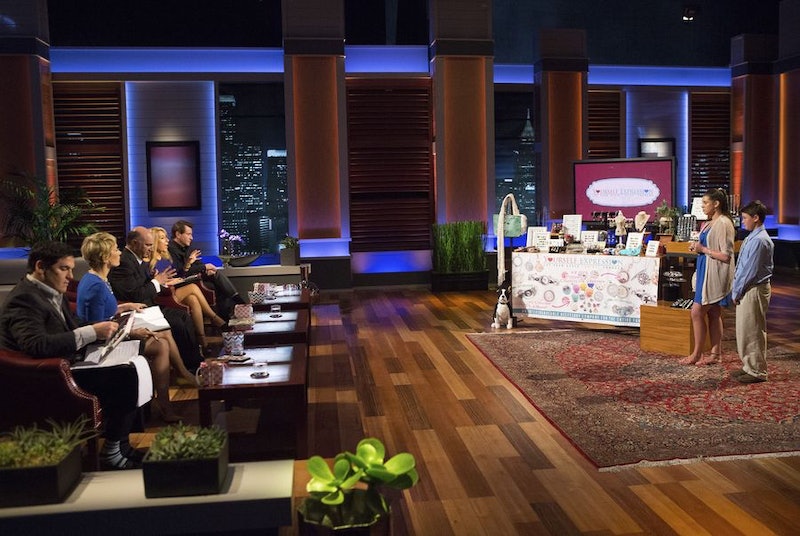 Some of the most successful companies in Shark Tank history have been in the fashion space, including Red Dress Boutique and Grace & Lace. But the jewelry world? Hmmmm, not so much. But could Yourself Expression, which is available now, change all of that on Friday night's new episode of Shark Tank ?

We'll have to tune in to find out. But I'm not quite sure I can wait until Friday night to know the fate of Yourself Expression in the Tank. I am uber-curious to see how the straight-laced, business suit-wearing Sharks will react to a company that's all about individuality, customization, and self-expression.

But then again, innovation and uniqueness is what Shark Tank is all about, so hopefully the Sharks will take kindly to it. And yes, Yourself Expression's products are just begging to be sold on QVC. Lori Greiner, take note.

So what is Yourself Expression really all about, and who's doing the expressing? All of that and much more will be revealed about the company below. And it's OK if you feel tempted to head over to the company's website to check out all it has to offer along the way. In fact, it would be kind of weird if you didn't.

It's All About You

You might have been able to figure that out from the name of this company, but what exactly will you be expressing and how? Your personal style through jewelry, of course! Yourself Expression is a company that designs and sells affordable, interchangeable jewelry — from lockets to rings to bracelets — for women, men, kids, and even pets. The company has created about 2,900 new products in under two years it's been a business, according to its website. So yeah, you're going to need a minute to peruse all of its offerings. Go ahead. I'll be here when you get back.

So yes, that means you can buy Yourself Expression's goodies now. You can order the designs through the company's official online store. And if you happen to be in Jacksonville, Florida, you can visit Yourself Expression's brick and mortar store, according to its Facebook page. "I think everybody should be able to afford beautiful jewelry, so all my collections are priced very reasonably so you can," founder Shelby Gogulski said earlier this year on The Chat (you can watch the full interview above). And she wasn't kidding. All of Yourself Expression's products are priced between $3 and $22, she said during the segment. It looks like the Sharks will have to gripe about something other than price point.

It Took Some Inspiration From One Of Your Favorite Holiday Movies

One of Yourself Expression's best-known products is the Angel Locket that consists of a colorful jingling ball inside of a necklace. Gogulski was inspired by the classic line from the 1946 holiday film It's a Wonderful Life, "Every time a bell rings, an angel gets his wings," according to a video about the product on The Grommet. The light jingle of the ball is meant to let you know that someone is always thinking of you and is with you in spirit. The meaning behind the Angel Locket is just as lovely as the product.

The Founder Is A Teen Titan

As previously mentioned, Yourself Expression was founded by Gogulski, and she originally got the idea for the company after her mom refused to buy her expensive boots with bows on the back, according to a blog post on its website. Gogulski decided to jazz up her own boots with interchangeable bows and even created a company called Boot Bling. Soon enough, Gogulski began researching interchangeable jewelry with her brother Gordon, who will be accompanying her on Shark Tank, and Yourself Expression was born, the "About" page on the company's website says. She has even been able to help her parents pay for her high school tuition with the company's sales. You go, Gogulski!

It Got A Big Boost From Rosie O'Donnell

Gogulski appeared on The View with then-co-host Rosie O'Donnell to talk about Yourself Expression, and she didn't exactly play by the rules to get there. She first met O'Donnell after pretending to be 16 years old in order to sit in the audience of a taping of the show (Gogulski was 15 years old at the time), the Yourself Expression founder described during the segment on The View, which you can watch above. Gogulski and her mom sat in the front row and told O'Donnell all about the teen's company. She was then asked to be on the show a couple of weeks later. O'Donnell has even sent some love Gogulski's way in anticipation of Yourself Expression's Shark Tank appearance. Ah, the power of networking.

It Has Big Goals For Its Shark Tank Appearance

Before it was revealed that Yourself Expression would be appearing on Shark Tank, Gogulski explained what she hoped to get out of the experience if she ever made it on the show. "I really want to get into the souvenir industry, theme parks, cruise lines, sports stadiums. Sports and character licensing is something I want to do, as well as retail," Gogulski said on The Chat. "We're in a few hundred stores right now, and so I really care about their mentorship and the connections [the Sharks] have, not so much the money. Of course, that would be great."

Here's hoping Gogulski gets everything she wants and more when she steps into the Tank.