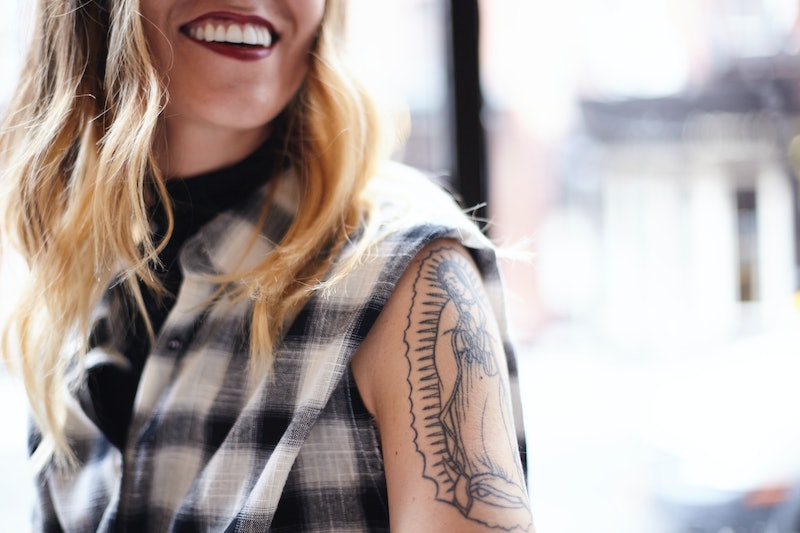 This November, many Republicans will face a tough decision: Support Donald Trump, or look beyond the cozy, conservative walls of the GOP. It’s a choice that many conservative voters probably never thought they’d have to make, but for those who have supported the controversial candidate from the very beginning, there’s more hope than ever that they can Make America Great Again. This is particularly true for some of the country’s newest voters, like the bright-eyed college students who support Trump — specifically, college women. They organized on campus after campus to help make him the nominee, and soon, these young Trump-ers will likely cast their first-ever ballot in a presidential election for a candidate many never saw coming.

Despite their fervor, young Trump supporters might be somewhat of an anomaly. Several polls during the campaign season have shown that among millennial voters, Trump's support is continually dwarfed by Clinton's. For instance, a Fox News poll in August found that Trump's support among voters under age 35 was less than half that of Clinton's.

Young women may be an even more difficult audience for Trump. Not only does he struggle to connect with young voters, but he also has lower support among Republican women than previous Republican nominees. Overall, Trump's support among female voters has been somewhere around 34 percent, according to Fortune.

Many of those voters who do support Trump credit his brutally honest, off-the-cuff personality as the reason for it. It's a quality that seems to resonate with even the youngest of prospective Trump voters. Take Sarah Hagmayer, a junior at Rowan College in Burlington County, New Jersey. Hagmayer is the national spokesperson and New Jersey state director for Students for Trump, a coalition which supports Trump on college campuses across the country. "The Trump campaign has been depicted in the media as being controversial, but I believe, personally, this is the shock wave of a candidate running honestly and as himself," Hagmayer tells Bustle in an email. "The campaign is tearing many out of their comfort zone."

Another young supporter, Brittany Brown, sees Trump's bold personality, which can seem off-putting to some, as a result of his background in business. Brown is a senior at Miami University in Oxford, Ohio, and the Ohio state director of Students for Trump. "He's never been a politician before," she tells Bustle. "He hasn't been trying to get everyone to like him, which he still isn't doing now."

"There's not one particular issue I could say I'm passionate about where Trump excels, but what I do get emotional about is the patriotism and the American spirit that I feel is revived in the citizens from his campaign."

Clearly, enough people like Trump to make him the presidential nominee of a major political party. However, there are others — the Republicans who have taken to burning their voter registration cards, for example — who have not taken to his personality and/or his policies. As the election nears, some voters (and pundits) may have expected Trump to change his tone to fit a more "presidential" profile, though Trump himself seems to be staying the path of outspoken and unconventional. According to Real Clear Politics, Trump's average unfavorable rating is near 60 percent.

Despite this, Trump remains competitive. Polls taken after the first presidential debate showed that the race between Clinton and Trump could come down to just a few percentage points, and after the latest Clinton email revelations, the polls have been evening out. Hagmayer, Brown, and Pennsylvania State University sophomore Jessica Mingle all tell me they knew early on that they liked and would support Trump in 2016.

Mingle, the campus ambassador for Students for Trump at Penn State, originally supported both Trump and New Jersey Gov. Chris Christie. Personality had a lot to do with it, she says. "It's refreshing to see politicians who aren't afraid to speak their mind and aren't too caught up in politically correct culture," Mingle tells Bustle. "Once Christie endorsed Trump, it was obvious for me to turn my full attention to Trump."

Hagmayer has also supported Trump from the get-go, but she says her passion seems to have more to do with the effect that Trump has on the American people. "There's not one particular issue I could say I'm passionate about where Trump excels, but what I do get emotional about is the patriotism and the American spirit that I feel is revived in the citizens from his campaign," she says.

Brown admits she was initially skeptical of Trump's campaign, though it didn't take long for him to win her over. She says she met Trump about two years before the election, when she attended the annual Conservative Political Action Conference (CPAC). That experience made her well aware of Trump before his current campaign, but she wasn't necessarily supportive of him initially. She tells Bustle, "When he came out as running, I was curious to see what he wanted to say ... The more I listened to him talk, the more I realized that he was speaking the most truth. The more backlash he got, the more I stood with him. It was more of a process for me, deciding to support him."

What's perhaps most interesting about Trump's young female supporters is their response to the offensive and inappropriate things he has said about women. Reminder: During the primaries, Trump criticized Carly Fiorina's face, and during the general election, he has claimed that Clinton doesn't have the "look" of a president. Not to mention his ongoing feud of sorts with Rosie O'Donnell.

After the first presidential debate, Trump grabbed the wrist of Bustle's Alexi McCammond and pushed her camera away from him. The irony was that McCammond had asked Trump about the very audience at hand: young female voters. McCammond wrote of the incident, "So Trump never verbally answered my question about how he would respond to women who are nervous to vote for him, but I got the answer I needed."

When I ask Brown if she has any qualms about Trump's misogynistic comments, she tells a very different story. She met a female Trump Tower employee while visiting the building in New York City recently, she says. The woman, who worked in Trump's gift shop, told Brown that she hadn't been following the election, but that Trump was the best boss she'd ever had, saying that he even comes down to the gift shop to help out when things need to be folded. "She said he's down to earth and she loves her job," Brown says.

Meanwhile, Hagmayer says that Trump's comments about women "have never concerned" her. "I've had meaner things said about me and all behind my back," she adds. "The media, however, just wants something to make headlines about."

For her part, Mingle points to Trump's policy proposals as justification of Trump's support for women. "In Trump's Veterans Administration reform plan he talks about how he would like to offer better support to female veterans," she says. According to his campaign website, Trump's plan would expand female veterans' access to OB/GYN services.

Nonetheless, she agrees with his views, opinions, and policies enough to work vigorously on his behalf — and she's not alone. Like him or not, Trump has gotten these young supporters energized about a process that all too often marginalizes or intimidates them — and they have found plenty of reasons to stay energized about him as a candidate. In a race as tight as this one, even Trump's seemingly small and rocky foothold among young female voters may be enough to keep things competitive until Nov. 8.