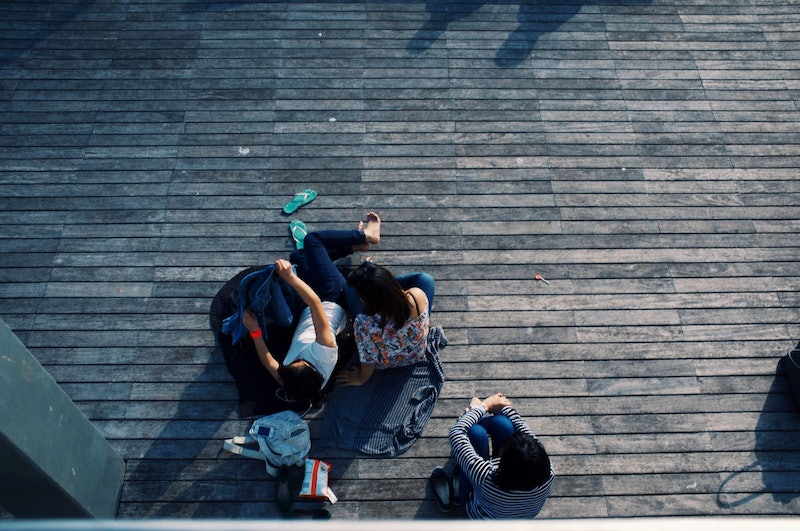 There's this girl I'm Facebook friends with — someone I worked with for quite a while — and I'm not afraid to admit it: I can't stand her. Every time she pops up on my newsfeed, a rage burns inside of me with the fire of a thousand suns. The logical decision would be to simply remove her from my Facebook... but I don't. Why?! Why don't we just unfriend people we don't like, instead of torturing ourselves? Well, it looks like science may have found an answer: We're worried it could come back to bite us in an unpleasant spot.

A study conducted by Nottingham Trent University found that "online troublemakers" tend to be well-connected socially, and we choose not to unfriend them because of the repercussions we could suffer as a result of their many connections. We're human. We want to avoid uncomfortable and awkward situations. So if you knew that deleting someone from your social media would mean major weirdness later on — perhaps even a loss of other friends — wouldn't you refrain? It's like those friends you follow on Instagram and they never follow you back. When you see them later on, the awkwardness is at a Level 10. They know they never followed you; you know they never followed you; you know they know; and they know you know they know that you know.

So instead of removing the person ticking us off the first place, we remain seemingly neutral. We don't interact with them online (also found in the study), but we don't cut them off entirely, either. It seems feigning indifference is our go-to method, only letting the "friendship" remain because the other option has potential drawbacks.

This makes me wonder about the path friendships take in real life when things go south, for whatever reason. Does the demise of IRL friendships appear as a giant gray area, as it does on Facebook? Or do we tend to end friendships in one swift motion, like ripping off a bandage? It looks like in comparing and contrasting how we treat online friends versus IRL friends, there are more similarities than differences.

One study published in Psychological Science tracked 410 seventh graders every year until they graduated high school and found that just one percent of friendships formed in seventh grade were still there in their senior year. There was no dramatic ending to these friendships; it was simply a matter of individuals' differences driving them apart. Friendships between boys and girls, straight-A students and C students, and popular and unpopular students were likelier to end.

This study may not seem applicable to adults; after all, kids change so, much so quickly — not to mention the fact that they don't necessarily possess or exercise the skills of working on and maintaining relationships, like adults more frequently do. But other research has been done into the nature of the beginnings and ends of adult friendships, and similar findings were uncovered.

As we get older, the things that seem to bring our friendships to a stop don't even have anything to do with the friendship itself, really. It is instead outside circumstances that get in the way — like a job or family duties, for example. But here's the thing: Our friendships don't come to a screeching halt. Similar to the Facebook friend we can't delete, these real-life friendships just sort of linger. While there is not necessarily any bad blood, there is rarely a definitive end to the friendship. In fact, as adults, we feel guilty demanding too much of our friends, so we settle for less, remain polite, and sometimes pick these relationships up months or years later. It all adds up, especially when you consider that as adults, new friendships don't just appear out of nowhere. They come as an extension from another area of our lives that we've already developed: We make friends with coworkers, or parents of our children's friends. We almost forget how to make friends without these pre-developed connections.

Further research shows that the end of friendships as adults can simply come down to a lack of dedication, investment, and communication. It's simply a relationship that just sort of fizzles out.

For all of these reasons, it would seem that the "end" of in-person friendships does, in multiple ways, resemble the end of online friendships. We treat them both similarly in that we don't mark a conclusion to them. We pretty much walk away and let them sit there, sometimes to be picked up at a later date, and sometimes just for the sake of not rocking the boat.