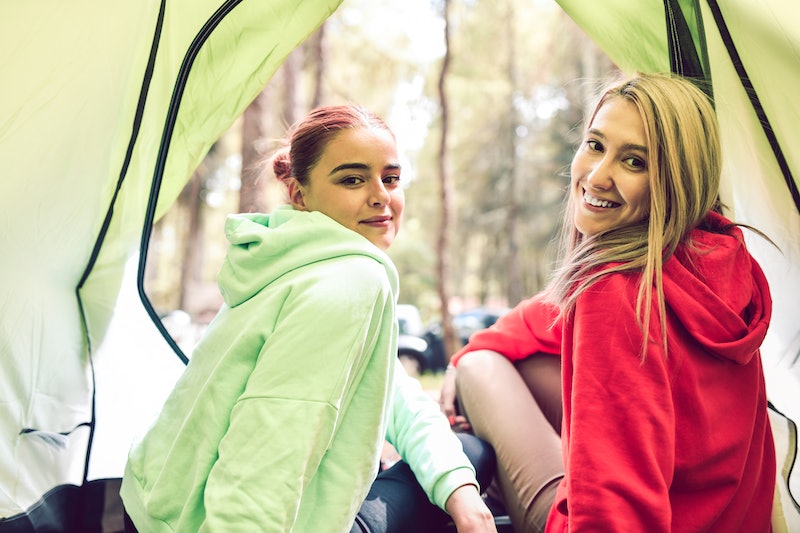 AleksandarGeorgiev/E+/Getty Images
By Marissa Higgins
May 2, 2016

Having too many friends sounds like the sort of problem you'd want to have, because hello, who wouldn't like having more pals to hang out with? In reality, though, studies show that our brains can only handle having so many BFFs at one time. Yeah, really: According to the MIT Technology Review, the ideal number of best friends for any one person is limited to just five at any given time. But there's a little more to it than just that, so before you start dropping people from your squad, read on.

Robert Dumbar has conducted a lot of the research we have right now on the subject of friendship. He's the man behind the Dumbar Number Theory, which suggests that the average person can have up to 150 friendships in real life — although it's also a lower number than both the average and median number of friends Facebook users have online. Dumbar's research was also the basis for the recent discovery that the average human can have five best friend relationships at the same time, and that's what we're talking about right now. Here's the deal.

In the early 1990s, Dumbar discovered a correlation between the size of a primate's brain and the size of their social group: In layperson's terms, the bigger the brain the primate had, the more friends the primate had. For people, this means that the size of our neocortex basically dictates how many close friendships we're able to maintain at once.

Recently, Dumbar and his fellow researchers decided to dig into people's phone records to determine the closeness of their relationship based on the frequency with which they spoke on the phone. Because we're all text-obsessed now, they used records from 2007, when most people still talked on the phone. The numbers came out to be that the average person had "4.1" close friends, based on their phone records, so we can safely say you can maintain up to five close friendships.

When it comes down to it, it's realistic to recognize that our brains are only able to store so much information; as such, it makes sense that when it comes to the people we're the most connected with, they're likely to take up more room, energy, and attention in our minds. This doesn't mean other people are unimportant, just that their relationship is different, in terms of how your brain handles it.

The same might not hold true when we consider the way we use social media and technology in our daily life, though, which means that we might process online friendships differently than we do IRL ones. The average Facebook user has about 338 Facebook friends, and the median Facebook user has about 200 friends — and while there's a pretty big difference between 338 and 200 friends, it's still also true that those numbers are both way, way higher than the five best friends the research shows your brain can handle at once. While again, there's nothing wrong with having tons of Facebook friends, it does suggest that we perhaps interact with our Facebook friends differently than we interact with our "real life" friends, or even our "best friends."

To be honest, I don't find the best friend cap super surprising: I think most of us have a group of friends that we're closer with than the rest, followed by a gradual distance between people who are friends, acquaintances, colleagues, and so forth. If someone told me they had a higher amount of "best friends," I'd probably have a hard time believing them — not because I'd think they were unlikeable as a person, but because I can't imagine how you would maintain close relationships with that many people at once. Friendships take time and energy, both of which are finite resources — and if you're trying to spread those resources between more than five people, odds are things would get a little thin.

If you think of yourself as a social butterfly who has a huge group of close friends, I still wouldn't sweat the results of this study too much — or start dropping any of your besties. However, it's interesting to keep in mind that over the years, the people we're closest to will likely change, even if those people are still important in our lives. As people change from "best" friend" to "acquaintance" status in our brains, it's good to remind ourselves to reach out to them and still cherish that friendship as more than just a Facebook number. "Small dose" friends are still friends, after all.

More like this
Are Gemini & Scorpio Compatible In A Relationship?
By Kristine Fellizar
The Most Compatible Life Path Numbers, According To Numerologists
By Kristine Fellizar
How To Spot The Signs You’re Being Love Bombed
By Lea Rose Emery and Mackenzie Sylvester
What Causes Clinginess In Relationships?
By Marilyn La Jeunesse
Get Even More From Bustle — Sign Up For The Newsletter