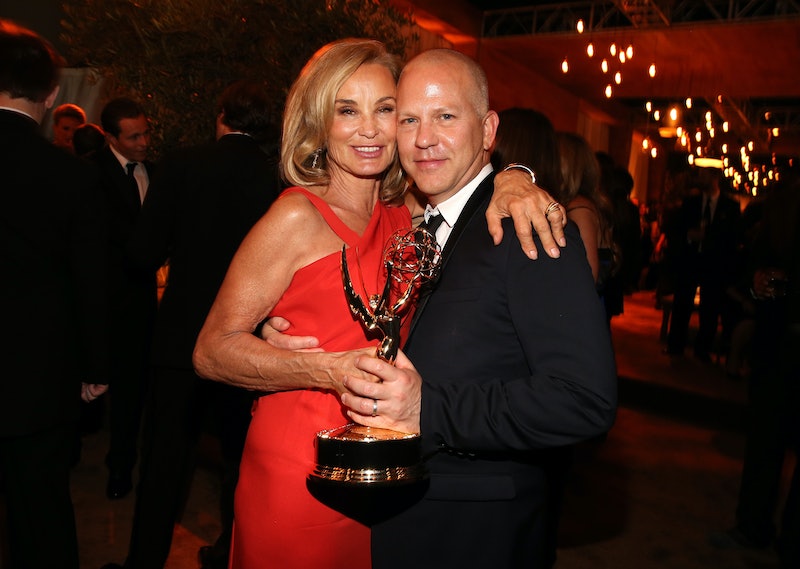 Well, this explains why Jessica Lange isn't returning to American Horror Story… On Thursday, FX announced that Lange will star in Ryan Murphy's Feud, a new anthology series she will headline alongside Susan Sarandon. The two Academy Award-winning actress will play Joan Crawford and Bette Davis, respectively, in a season focused on the bitter enmity between the two women during the filming of the classic 1962 film What Ever Happened To Baby Jane?

The show will be executive produced by Brad Pitt and Dede Gardner, the team behind such recent Oscar heavyweights as 12 Years A Slave and The Big Short. In addition to Lange and Sarandon, Season 1 will also star Alfred Molina (Spider-Man 2) as Robert Aldrich, the director of Baby Jane; Stanley Tucci (The Lovely Bones) as Jack Warner, president of Warner Bros. Studios; Judy Davis (A Passage To India) as gossip columnist Hedda Hopper (the same woman recently played by Helen Mirren in Trumbo); and Dominic Burgess (The Leftovers) as Crawford's and Davis' Oscar-nominated co-star Victor Buono.

When Feud premieres, it will be Murphy's fourth show on the air simultaneously, following fellow FX anthologies American Horror Story and American Crime Story, as well as his FOX series Scream Queens. Like both AHS and ACS, Feud will tell a totally different story every year, with each season devoted to exploring "the bouts and blows of epic conflicts" throughout history.

First up: Joan Crawford vs. Bette Davis! The eight-episode inaugural season of Feud will recount the story of what is arguably Hollywood's most infamous clash of titans. Allegedly, this feud started in 1935, when Davis fell in love with Franchot Tone, her co-star in Dangerous (the film that won Davis her first Oscar). Unfortunately, Tone fell in love with another young starlet, Joan Crawford, and the two married shortly thereafter. 10 years later — and long after Crawford and Tone had divorced — Davis turned down the lead role in Mildred Pierce… which was then offered to Crawford instead. Crawford won an Oscar for it.

So the two women already had a history of enmity when they were cast in their first movie together, What Ever Happened To Baby Jane?, a psychological thriller about two washed-up former actresses living together and tormenting one another. The movie was supposed to revitalize both of their flagging careers — but in the end, only one of them (Davis) was nominated for an Academy Award. Crawford was so incensed over this snub that she called all of Davis' fellow Best Actress nominees and offered to accept the award on their behalf should any of them win. So when Anne Bancroft beat Davis for her performance in The Miracle Worker, Crawford got to go out onstage and gloat in front of her defeated co-star.

Naturally, Davis didn't like that very much. When Crawford passed away 15 years later, "Baby Jane" still held a grudge. The solemn occasion gave rise to one of Davis' most infamous quotes:

You should never say bad things about the dead, you should only say good… Joan Crawford is dead. Good.

In regards to Feud, FX Networks CEO John Landgraf said that, "The series will offer a seductive, insightful look at what lies behind legendary personality conflicts." If the recent success of The People v. O.J. Simpson is any indication, he's absolutely right. Let's just hope that Lange and Sarandon don't get too "method" in their preparation for these sure-to-be award-worthy roles.