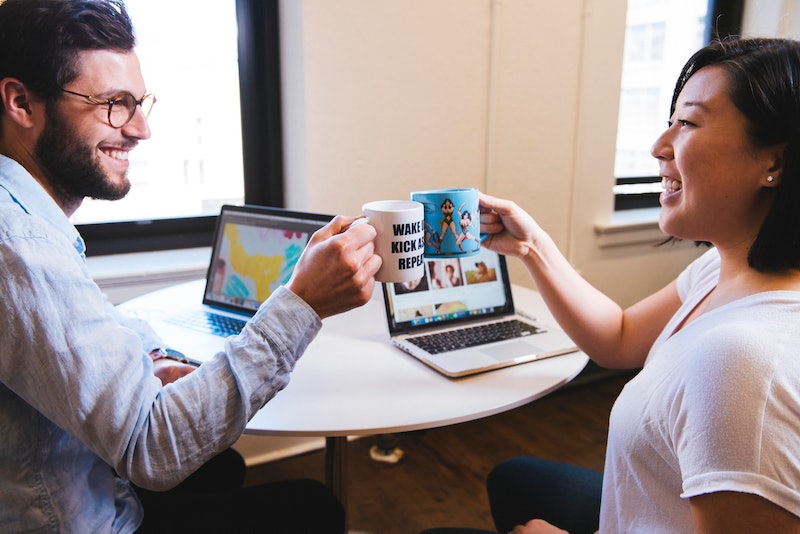 It's pretty hard to watch any good sitcom without fantasizing about a workplace romance — whether you're moved by the ballads of Jim and Pam in The Office, Leslie and Ben in Parks & Rec, or Henry and Casey in Party Down. As these televised lovebirds can tell us, workplace flirtations create excitement that breaks up the 9-to-5 mundanity, and even more than that, they can potentially lead to fulfilling, beautiful long-term relationships. But there is one thing you should know about flirting in the workplace, and that is to be careful.

Yes, you may very well find your life partner at work, but you may also find yourself in an awkward situation that forces you to choose between continuing your dream career (or maintaining an income) and being stuck in a small environment with an ex or unrequited love. Even worse, if you go through a bad breakup with a co-worker who turned out to be abusive or if you start experiencing unwanted flirtation from a manager or co-worker, then you may find that you are one of the three women who will deal with sexual harassment in the workplace, as reported by a Cosmopolitan survey.

Maybe you don't even want anything to happen with this co-worker. Perhaps you are in a completely satisfying relationship with someone outside of work. But have you ever heard the term "work wife" or "work husband"? This is a person at work with whom you share a real, special, and intimate bond because you are experiencing the same thing (at work). As Debra Major, a professor of organizational psychology, explains to Mic, while you and your work spouse have to share a special kind of chemistry, the relationship is "usually a platonic one, free of any romantic spark." These relationships are extremely meaningful, and they're fun escapes from the daily grind. These interactions can also help you blow off steam during a rough day at the office.

Plus, if you are single and there is a romantic spark, you may find yourself happier in general because now you have a reason to actually look forward to work. No matter how much you may dread that commute, it all becomes worth it when you and your co-worker exchange knowing glances and share inside jokes. This helps to explain number two...

According to a Match survey of 11,000 people, work/school is the most common place to meet a #lifepartner. It makes sense — you are around these people daily, almost more than anybody else. If you are working at a job you enjoy, that means you share passions and interests with the people around you. It's a pretty good dating pool.

3. Know What You May Be Getting Yourself Into

Remember when Jim had to transfer to the Dunder Mifflin branch in Stamford, Connecticut, because it was too hard for him to be around Pam while she was still engaged to Roy? And remember how depressed Pam was when Jim came back to Scranton with a new office romance? Either of these things could happen to you, so just know that the situation could potentially become messy. If your flirtation at work develops into a full-blown relationship that ends while you are both still employed, then you have to be willing to deal with the awkwardness and sadness of sharing a space with your ex. It may drive you to quit your job, and that clearly can very negatively affect your financial stability and/or career ambitions.

Maybe your flirtation will never grow into a relationship, but you wish it would. And then the co-worker you're pining after starts dating someone else. And now you have to cope with seeing your unrequited crush regularly, for maybe eight hours a day. Yes, it is possible that you will get over that heartbreak and move on in your job flawlessly. But what if you can't? Are you prepared to handle it? Can you learn to just be OK with it for the sake of your job, your co-worker, and your own sanity?

4. Women Are Put In Unfair Situations (How Shocking)

A 2013 study of American law offices presented at the Academy of Management found that "workplace cultures that encourage traditionally masculine qualities, such as aggressiveness and assertiveness, encourage women to flirt while, at the same time, punishing those who do so by mistreating them on a daily basis. ... Masculine organizations encourage the use of strategic flirtation, but we found no evidence that organizational masculinity shields women from the associated everyday mistreatment."

Essentially, women are pressured to flirt in order to get ahead in male-dominated industries and workplaces, and when they do succeed, they are still discriminated against and shamed. As Carrie Murphy writes for Bustle, when it comes to flirting, you are "damned if you do, damned if you don't."

5. Be Aware When It Is Not Flirting, But Sexual Harassment

Who is doing the flirting? Is a manager or other superior aggressively coming on to you? Do you have to mentally prepare for unwanted advances at work daily? Are you afraid that you will lose your job if you reject their flirtations or get blackballed in your industry if you complain to HR because of the power dynamics between you and the person "flirting"? Then you are not being flirted with; you are being sexually harassed. I will repeat the horrifying statistic mentioned earlier: one in three women face sexual harassment at work. The Cosmo survey revealed that 81 percent of women employees are harassed verbally, 44 percent reported encountering "unwanted touching and sexual advances," and 25 percent said they had received "lewd emails or text messages."

Women often feel pressured to normalize sexual harassment and brush it off as flirting. But if you can't serve tables without your much older boss telling you what he would do "if he were 20 years younger," that's not harmless flirting. That's harassment and a hostile work environment. You don't have to work in that environment, nor should you need to work in that environment. Don't let others tell you it is "no big deal."