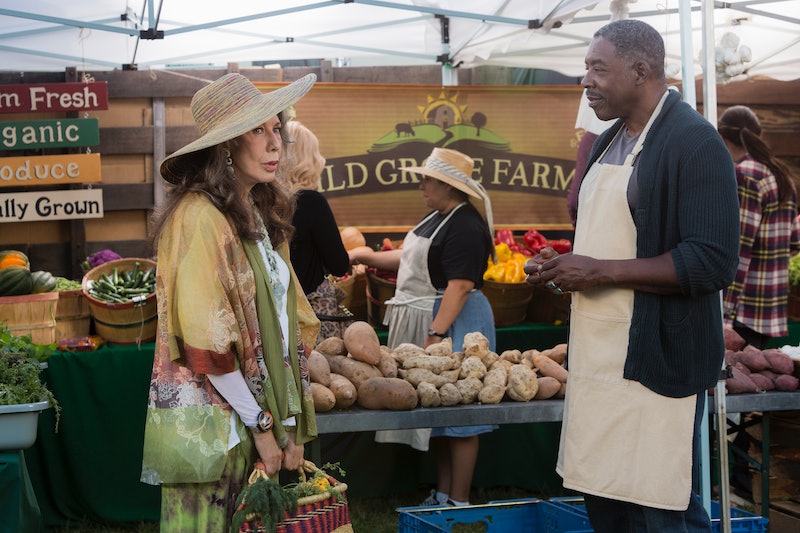 One of the potential pitfalls with streaming series is that when they return for a new season, a full year has passed instead of a few months. Often, it helps to refresh on some minor characters. For example, who is Jacob on Grace and Frankie ? Spoiler alert for Season 2! This love interest for Frankie is back for Season 2.

Jacob is played by Ernie Hudson, who you probably best know from the original Ghostbusters movie, though he was also in Oz, Miss Congeniality, and more recently on shows like Modern Family and The Secret Life Of The American Teenager. He is a legendary character actor who has had various appearances in movies and television shows since the 1970s, so you've definitely seen him before.

He was only in a few Season 1 episodes, as Frankie's friend and "yam man" who brings her vegetables. It isn't until later in the season that Frankie realizes Jacob might be flirting with her. I've been there! He's like, super into her, and even though she claims to be so in touch with everything, she has no idea. In Season 1, Episode 8 "The Sex," Frankie catches wise to this and accepts Grace's advice and they have somewhat of a date.

It's a promising connection, however, after she hooks back up with Sol in the finale, it's clear that Frankie is not yet ready to move on. That's one of the best things about Grace and Frankie. While there are plenty of jokes, the series does not shy away with all of the complicated feelings and mourning that comes with divorce. All that said, it's great that Jacob is back in Season 2. Poor Frankie deserves a clean break and a little happiness. That yam man is definitely the way to go.