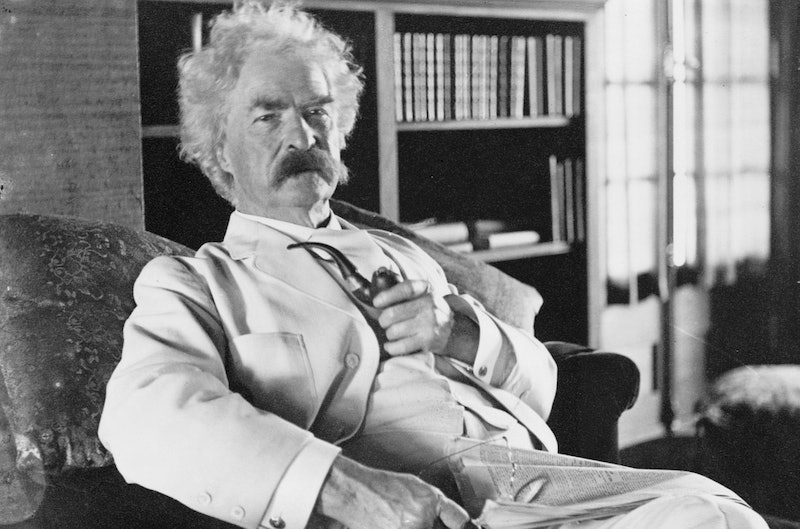 When you think of the great authors and poets of history, you probably don't think of Currer Bell. Or Marguerite Annie Johnson. Or Ricardo Neftalí Reyes Basoalto. Or Boz. But you've probably read their work without realizing it, because authors have been changing their names since time immemorial. And there's a story behind every interesting author pseudonym.

Authors write under pen names for all sorts of reasons. Some want to escape the gender bias associated with being a female writer (a bias which is somehow still a thing today). Some want to write books without their own fame getting in the way (or, occasionally, their own infamy). And some are just trying to be funny (mostly just Mark Twain, though). And, as much as we all try not to judge a book by it's author's name, an intriguing name never hurts.

Everyone, in a moment of quiet repose, has contemplated what their DJ and/or rapper name would be. Most of us have cycled through some truly cringe-worthy usernames, Twitter handles, and email addresses in our time. Some of us might even have tried to make a nickname stick back in high school (shout out to the one friend who called me "Lottie" for a full week). So we can all learn a thing or two about pseudonyms from how these authors picked their pen names:

When Theodor Seuss Geisel was a student at Dartmouth College, he used to write and draw cartoons for the Dartmouth Jack-O-Lantern, a humor magazine. That is, until he and a bunch of friends were caught drinking gin in his room (this was back during Prohibition, when colleges were even more uptight about stuff like that). He was banned from writing for the magazine anymore... so he started submitting his work under his middle name, "Seuss." Thank you bootleg gin, for giving us the Dr. Seuss we know and love today.

In his early twenties, Samuel Langhorne Clemens worked on steamboats in the Mississippi River. The water had to be two fathoms (or twelve feet) deep for safe steamboat travel, so it would be measured on a line—when the water hit the second mark on the line, someone would yell out "Mark Twain!" Clemens later adopted the boating term as his pen name when he started writing short humor pieces, and the name stuck.

You probably don't run across too many people named Currer, Ellis, or Acton, but you've likely met some Charlottes, Emilys, and Annes. The three Brontë sisters were all writers in 19th century England, when female writers were not thought "proper" (or marketable). So they each choose gender-neutral names that would obscure their gender while preserving their initials. Currer and Acton were the last names of female scholar and a female poet who the Brontës knew of, as an extra middle finger to all the sexist publishers out there.

This one's for all you fanfic writers: when Judith Rumelt was in high school, she wrote a novel called The Beautiful Cassandra , after a Jane Austen story with the same title. She eventually started writing fan fiction under the name "Cassandra Clare," and kept it as a pen name when she published her first novel. So choose that username wisely, because you might end up with it for the long run.

"Richard Bachman" is a pen name of Stephen King (and yes, you'd better believe that Stephen King wrote a foreword for his own book, because Stephen King can do whatever he damn well pleases). He wrote several books under this pen name because he was writing too many books, and his publishers thought he'd saturate the Stephen King market. The name was chosen at the last minute: when his publisher called, there was a Richard Stark novel lying on King's desk and "You Ain't Seen Nothin' Yet" by Bachman Turner Overdrive playing on the record player. Thus, Richard Bachman was born.

As a young man, Stanley Martin Lieber planned to be a serious literary writer . He got his start writing comic books, though, so he decided to use the pen name "Stan Lee" for the kid stuff, and save his real name for more important writing later on. Of course, he ended up becoming the most celebrated comic book writer in the world, and eventually changed his legal name to Stan Lee (and presumably got over his literary snob phase).

When Daniel Handler was doing research for his first novel, The Basic Eight, he had to contact several right-wing organizations. He didn't want to put his real name on any mailing lists, though, so he made up the nonsense name "Lemony Snicket" for when he wanted to hide his identity. The name became an inside joke with his friends, until he decided to stick it on a series of children's books (and create a dour narrator to go along with it).

Marguerite Annie Johnson was nicknamed "Maya" as a little girl, short for "mya sister." As a young woman, she worked as a calypso dancer, and briefly married a Greek sailor named Tosh Angelos. When her managers asked her to come up with a more exciting stage name than "Marguerite Johnson," she combined her childhood nickname with a version of her ex-husband's last name, and went with "Maya Angelou" because it sounded better.

When Ricardo Neftalí Reyes Basoalto was thirteen or fourteen, he already knew he was going to be a writer. His father forbid him from writing, though, because it didn't seem financially sound to him (I hear that, Pablo Neruda's dad). So, young Ricardo decided to change his name so that his father wouldn't recognize his writing, and went with Pablo Neruda for reasons that the adult Pablo Neruda could never remember.

What do you do when you're in prison for embezzlement but you have a lot of great ideas for short stories? Come up with a pen name based on your favorite prison guard, of course. William Sydney Porter served three years for embezzlement (he was sentenced to five, but he got out early), and most people think he took his famous pen name from the prison guard Orrin Henry. But other sources insist that the name came from the phrase, "Oh, Henry!" which Porter would often say to his cat, Henry.

Charles Dickens' name is undeniably famous today. But when he published his very first book ever (a collection of literary "sketches"), he chose the pseudonym Boz. Boz. Hands down the most muppet-y pen name ever. Apparently, "Dickens" was sort of an embarrassing last name to have back in the day, so he chose the name Boz as a less embarrassing option. The story goes that "Boz" was short for "Boses" which was a nickname for "Moses," which was the name of a character from a book that Dickens liked—but in any case, there was a point in history when "Boz" sounded like a more respectable name than "Charles Dickens."