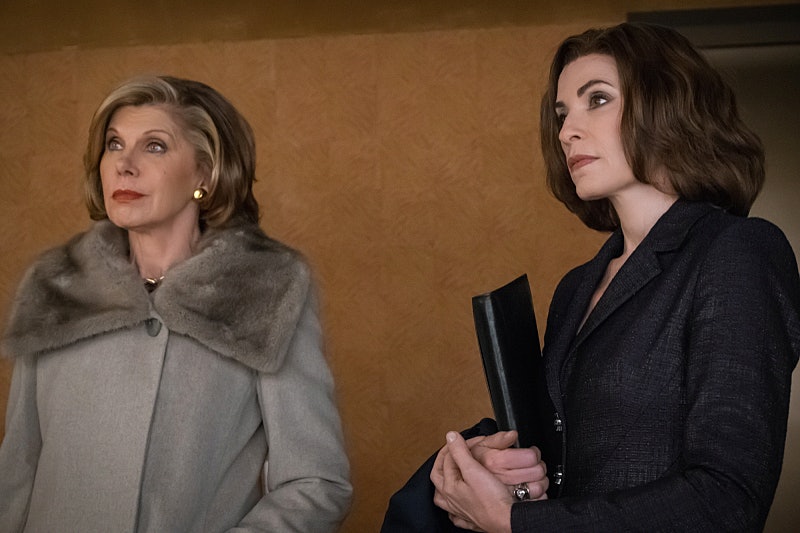 Alicia and Diane might have just started an all-female firm together, but it might not last in the wake of what happened on The Good Wife series finale, "End." Looking back, maybe having Diane defend Peter against bribery charges wasn't such a great idea. In a last ditch effort to save Peter from jail time, Alicia betrayed Diane on The Good Wife by discrediting her husband, Kurt McVeigh, on the stand. The bold move, while effective in court, most likely cost Alicia her friendship with Diane, and it might cost her her firm.

Here's what happened: in the race to save Peter from jail time, Alicia, Diane and Lucca decided to use the jury's curiosity about the murder case to their advantage by going after the evidence and re-testing the bullets. They got to work trying to prove that Peter would have had no reason to tamper with evidence because the accused was never guilty while Alicia and Diane tried to negotiate on Peter's plea deal. In their search, they found the missing bullets (which were conveniently misplaced in evidence) and had Kurt test them. Unfortunately, the bullets confirmed that the accused was, in fact, guilty of the murder, meaning that Peter had cause to throw the case to get campaign donations.

When Alicia suggested putting Kurt on the stand in an attempt to discredit him, Diane shot her down, saying that Kurt is too honest to be discredited. It will backfire on them. But, with her husband on the line, Alicia and Lucca decided to go against Diane's wishes, and Lucca went after Kurt when he was called to testify. She even went so far as to ask him if he was having an affair with his former colleague, who also testified. Before he could answer her question, Diane walked out of the courtroom, and we never heard the answer.

Alicia wanted to keep Peter out of jail so badly, she was willing to risk her friend and mentor's marriage to do it. And it worked, or, at least, it seemed to. Peter got one year's probation and had to resign as Governor — no jail time whatsoever. But, after his announcement Diane saw Alicia and told her how she felt about her stunt in court: she slapped her hard across the face.

The two didn't have a chance to make up before the final credits rolled, so who knows what this means for the future of Lockhart, Florrick. I'd like to think that they were able to patch things up and move forward, but there are some wounds that never fully heal.