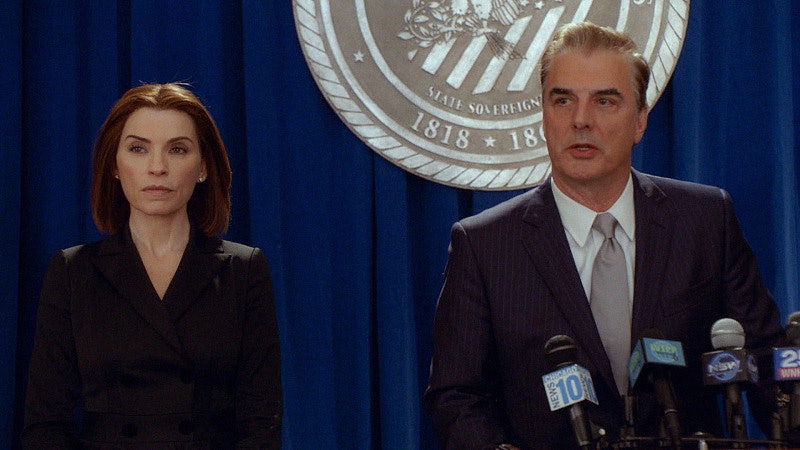 Peter Florrick's saga finally came to a close on the series finale of The Good Wife , and, thankfully, so did Alicia's marriage. Peter's not having a very good week: the case against him and accusations that he accepted a bribe to throw a murder case seemed impossible to beat. With all the evidence against him, Peter was facing up to 10 years in jail. In the end, he managed to get a plea deal: no jail time and one year's probation, but he has to step down as Governor. And that's not even the worst of it. Despite all those years together, all the scandals he weathered with his wife by his side, Alicia is done with Peter on The Good Wife . The Florrick divorce is on.

After seven seasons of standing by her man, Alicia looks like she's ready to have a clean break from Peter. And she's not going to delay her divorce just to help make her husband look better in the public eye. When Alicia decided to support Peter publicly and play the supportive wife during his trial, her divorce was put on hold, and many worried that she was back where she started. But, if the final scene is anything to go by, Alicia's not going t be standing by Peter's side much longer.

After standing next to him while he announced he was resigning as Governor, Alicia refused to take his hand and smile for cameras. Instead, she walked off the stage, chasing after a man she believed to be Jason. It could be argued that the fact that Jason wasn't really there might mean Alicia could go back to Peter, but I don't think so. Alicia has grown a lot in the past seven years, and no matter what is going on in her love life, she knows that being Peter's dutiful wife does not make her happy.

Seeing Alicia finally walk away from Peter is extremely satisfying. The Good Wife is over, and, with a divorce on the horizon, Alicia is no longer a good wife. And that's for the best.