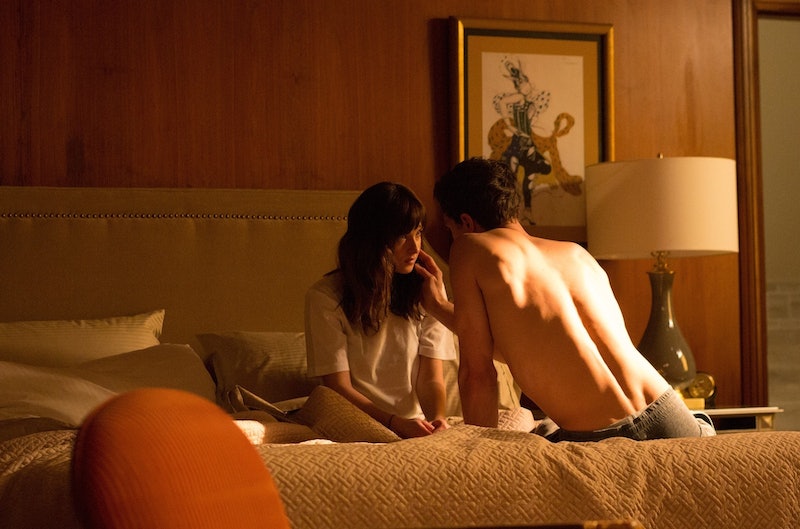 We’re always hearing that we could be having better sex, a better orgasm, or a better relationship. But how often do we hear the nitty-gritty of how we can actually better understand our deepest desires and most embarrassing questions? Bustle has enlisted Vanessa Marin, a sex therapist, to help us out with the details. No gender, sexual orientation, or question is off limits, and all questions remain anonymous. Now, onto today's topic: how to know if you're with someone who is toxic in bed.

Q: “I've been dating someone for 5 months, and for the most part it's going very well. He is kind, in-tune with my emotional needs, and has given me a social outlet in my new community. I was in a toxic relationship for 7 years, so it feels very good to feel like I'm in a healthy relationship. Eventually, I found out that he has never gone down on a woman and is repulsed by the idea. I am a 24 year old woman who has been sexually active since I was 14; had I known he was not interested in giving oral sex I would not have agreed to a monogamous relationship. A piece of me thinks I should end things now because I don't want to be feeling this frustration two years from now. On the other hand, I feel like I should give him time to warm up to the idea of how much it could please me. The problem is, I avoid having sex with him because I feel let down, and that's not fair to either of us. I’m wondering if I’ve managed to get myself into another toxic relationship, just in a different way. Should this be a dealbreaker?”

A: Thanks for the question. Sexual compatibility is such a huge and complicated topic. Obviously we’re never going to find partners who are absolutely perfect fits, but it’s hard to know where the “dealbreaker” line gets drawn. When is it something that’s just a bummer, and when is it something that’s veering into toxic territory? Since this can be such a complex issue, I’ll address this specific dynamic that’s happening with your boyfriend, and share eight potentially toxic qualities to look out for in a sexual partner.

Let’s start with an obvious one. It’s one thing to disagree or to not be on the same page about specific sexual acts or interests, but we all need to treat each other with basic kindness and respect. If a partner is in any way demeaning of you, it’s time to send them packing. This might include insulting or derogatory comments about your body, your orgasmic timing, or your sexual skill level.

The fact that your boyfriend said he’s “repulsed” by oral sex is a huge red flag to me. It would be different if he had said he needed more time to get comfortable with it, or that he was self-conscious about his oral skills. It’s also his prerogative to decide which sexual activities are on or off the table for him. But the word "repulsive" is just plain demeaning. How do you think he’d feel if you told him you were repulsed by the idea of going down on him? If you want to give this guy the benefit of the doubt, you can ask him to explain what he meant by using that word, but he’d better have a pretty good explanation.

2. They Don’t Take Your Requests Seriously

We all get to decide which activities we are and aren’t comfortable doing, but it’s also important a partner take your requests seriously. You want a partner who is going to listen when you talk about your desires and respond with respect. It’s hard to make sexual requests! You want to be with someone who values that vulnerability. I typically see this dynamic when one partner doesn’t want to acknowledge that the other partner has a higher sex drive, or when one partner wants to experiment with kink or an unusual fantasy but the other one doesn’t.

If you think his use of the word “repulsive” was simply a really unfortunate choice in words, I’d also take a look at how your boyfriend responded to your initial conversations about oral sex. Was he respectful about the fact that you wanted oral sex in the first place? Did he make a joke about it? Did he brush you off? You said you wouldn’t have gotten into a relationship with him if you had known he wasn’t interested in oral sex, so keep in mind that this was obviously an important request to you — and that's valid.

3. They Take More Than They Give

Nobody wants a selfish sexual partner. Sex isn’t enjoyable when you can tell that your partner doesn’t care about your experience, your desires, your pleasure, or your orgasm. It’s not fun when you’re expected to do all of the initiating or all of the work, or if you’re expected to lay back and let your partner do what they want. Bossy in the bedroom is one thing; controlling is another.

Does it feel like your boyfriend is holding up his end of the bargain in the bedroom? Does he expect you to go down on him even though he won’t go down on you? That would be another glaring red flag. Sex has to be a two-way street.

4. They’re On Their Own Timeline

Another quality to look out for is a partner who is overbearing about the timing of sex. They might be extremely particular about when they’re open for business and when they’re closed (more on this below). Or they can be picky about timing in the moment, deciding to move from one thing to another without checking in with you, or expecting you to orgasm at a specific time that’s to their liking. This can be a sign of selfishness or self-centeredness, and an indicator of a lack of respect.

If your boyfriend won’t give you oral, will he warm you up or help you orgasm in other ways? Does he ever seem impatient or in a rush? If so, that's toxic.

5. They Always Turn Down Your Advances

One variation of the above is a partner who is dead set on their own idea of when they want to have sex. They might want to be the ones in control of when sex happens and when it doesn’t. If they’re not 100 percent in the mood when you initiate, they’ll turn you down without a second thought, or they might get upset with you for even trying to initiate in the first place. Turning down a partner’s initiations is perfectly fine, but I’m talking about consistent, unapologetic rejection. Sometimes this is about disregard for your desires, and other times it’s about wanting to be in control. Either way, it’s usually bad news.

Sex is a vulnerable act in so many different ways, and it’s important for us to try to stay as safe as possible. You need a partner who is on board with using protection every single time you’re intimate (including times they’re intimate with other people, if you’re not monogamous). They need to be able to talk about their STI status, and how the two of you are going to prevent pregnancy (if that’s a possibility). If you have rough or kinky sex, they need to be willing to use safewords and safety protocols. Period.

7. They Don’t Respect Your Boundaries

It’s obvious that you shouldn’t ever be with a partner who forces you to do things that you’ve said “no” to. But disrespecting your boundaries can happen in subtle ways too. Does your partner ever push you to “just try it,” even if you’ve said you’re not interested? Have they ever said something along the lines of, “can you do it for me?” or, “you’ll like it, I promise”? Do they take longer than they should to abide by your safeword? Do you ever feel rushed or hurried when you’re together? If so, that's toxic.

8. They Make You Feel Ashamed

This is perhaps one of the biggest red flags in a sexual relationship. Sometimes partners can be toxic in very clear and obvious ways, but sometimes there’s more of a visceral feeling that we get when we’re with a person. Maybe you’ve had the experience of just feeling icky after sleeping with someone. You can’t even put your finger on what it was, but it just feels off. Or maybe the word “repulsive” is lingering with you in the same way it’s lingering for me.