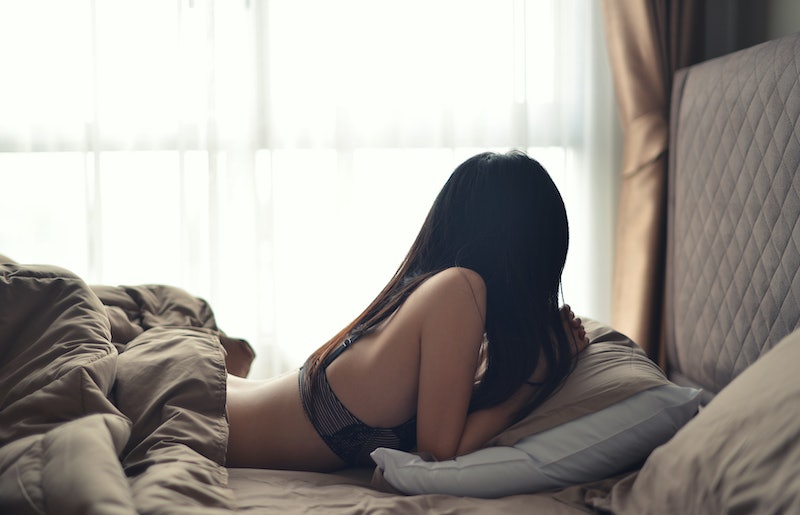 We’re always hearing that we could be having better sex, a better orgasm, or a better relationship. But how often do we hear the nitty-gritty of how we can actually better understand our deepest desires and most embarrassing questions? Bustle has enlisted Vanessa Marin, a sex therapist based in San Francisco, to help us out with the details. No gender, sexual orientation, or question is off limits, and all questions remain anonymous. Now, onto this week’s topic: what to do when a guy won't go down on you.

Q: I’m a single girl currently getting a lot of use out of my Tinder account. In the last year, I’ve progressed to the fourth or fifth date with a handful of guys, and have wound up sleeping with them. I’m totally cool with casual sex, but one strange pattern I’ve noticed is that none of them have offered to go down on me. I went down on all of them, expecting it to be reciprocated, but it never happened. Is this a sign that guys these days are just selfish? I love receiving oral, and wish it wasn’t so hard to find a partner who loved it too! How do I deal with all these guys not giving oral?

1. Try Not To Be Too Quick To Judge

It might be tempting to want to write these guys off as being selfish or inconsiderate. Some of them very well may be, but not all of them! I polled some guys about this question, and they said most women turn them down when they try to initiate oral sex. Lots of women worry about their genitals being “icky” or “gross,” so the last thing they want is a guy’s head all up in their business.

2. Ask For What You Want

You can’t expect guys to read your mind about what you’d like them to do to you in bed. The simplest way of increasing your chances of getting oral is to ask for it. It would be nice for a guy to offer, but if it’s something you want, you should feel comfortable making a request.

So let’s say you put yourself out there and asked him to go down on you, only to have him turn you down or skirt around the question. Let yourself feel disappointed, then ask for more details. You don’t want to be pushy or a jerk about it, but I think it’s a good idea to ask him how he feels about oral.

This question is a good gauge of his character, and may give you some clues about how to move forward. It's your opportunity to feel into how much of a dealbreaker his oral reluctance is for you.

4. ... And Pay Attention To His Response

Different women will have different standards, but if he says something demeaning like, “it’s just weird,” or "it tastes gross," he’s probably not a dude who deserves to get into your pants anyways. If he says something like, “I’m not that experienced, and I don’t want to disappoint you,” you can happily offer to be his tutor!

5. Respect The Fact That He Might Not Be Ready

6. Don’t Do Anything You Don’t Want To Do

Along those same lines, it’s important to respect your own preferences too! You said you went down on these guys, expecting for them to return the favor. Don’t ever feel like you have to do something you don’t want to do just to get what you want.

We can all contribute to a more cunnilingus-positive world by being open about our oral desires. Your question made me think of the Dan Savage acronym, GGG. It stands for good, giving, and game, and it’s Savage’s way of describing what it means to be a great sexual partner. Just to be clear, the goal isn’t to push people into doing things that they don’t feel comfortable with, but celebrating being giving and generous partners with each other.

So the next time you have a guy go down on you, thank him! Encourage your guy friends to become bigger proponents of oral. Talk to your girlfriends about their feelings and experiences. Become the best oral advocate you can be!

And remember, none of this is a reflection on you or the awesomeness of your vagina. Have fun — and keep staying true to what you want.

More like this
12 Aphrodisiac Desserts To Spice Up Your Valentine’s Day
By Kaitlyn Wylde
My Partner Wants Me To Wear A Diaper During Sex. Help!
By Sophia Benoit
12 Anti-Valentine’s Day Memes For People Who Are So Over Romance
By Meghan Bassett
18 Hinge Prompt Answers To Try If You’re Looking For Something Casual
By Lexi Inks
Get Even More From Bustle — Sign Up For The Newsletter
From hair trends to relationship advice, our daily newsletter has everything you need to sound like a person who’s on TikTok, even if you aren’t.