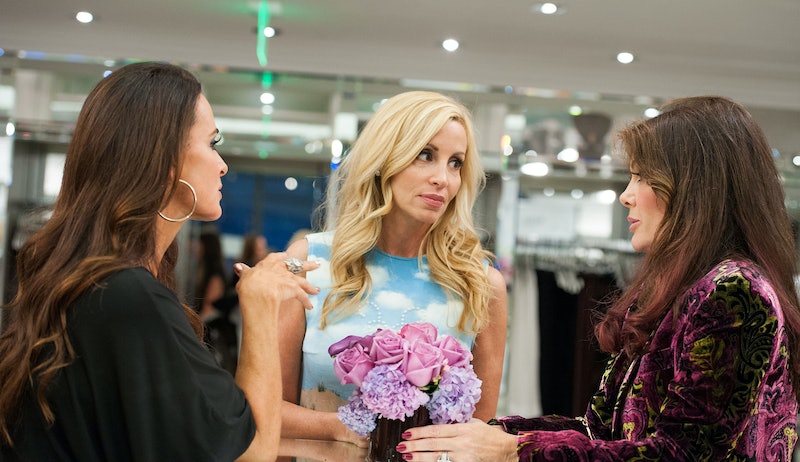 If I never hear the word "Munchausen" ever again it would be too soon. Season 6 of Real Housewives of Beverly Hills basically focused on one plot line the entire time. It was ridiculous how the ladies questioned Yolanda Hadid's Lyme disease (even bringing up Munchausen syndrome), and how it got dragged out for an entire season. It's was even weirder because there were other interesting things that happened, which also got caught by the cameras. There were plenty of crazy moments on Season 6 of Real Housewives of Beverly Hills that had absolutely nothing to do with Yolanda's Lyme disease.

Sure, the Munchausen story line about whose fault it was that the word was brought up in the first place was intriguing at some points, because it was just so outrageous, but I still think that other plot points could have been focused on, too.

There were a lot of crazy things that happened that really got overlooked by reunion time. There was much more going on in RHOBH than those ridiculous rumors. The moments below might have gotten a little lost in the shuffle, but that's why I'm here to remember them.

First off, it was just so weird seeing Bethenny Frankel in the mix with the Beverly Hills ladies. Once I got over the shock of those two words colliding, I was pretty annoyed by Bethenny's attitude when she started questioning the way Erika Jayne markets her singing career. As far as I know, all Bethenny did was watch a music video, so I have no idea what kind of insight she would have about Erika's marketing strategy or why she would ever bring that up when she wasn't asked. Erika handled the criticism like a pro though and I'd expect nothing less.

Lisa Vanderpump Pushing Eileen To Talk About Her Marriage

I have really grown to love Eileen Davidson, so I was vicariously offended when Lisa Vanderpump kept pushing her to discuss her husband Vince Van Patten, who she met while they were both married to other people. LVP just wouldn't let it go, upset Eileen, and refused to apologize for it. It just came off like she was nosy trying to make good TV, not like she was at all interested in Eileen's life or backstory. #TeamEileen

Erika Showing Off Her "Pat The Puss" Dance Move

Every time Erika or one of her dancers utters "pat the puss," I cannot help but be amused and little shocked. It's not at all offensive, but it's just not something I hear every day — let alone on the Beverly Hills spin-off of Real Housewives. That said, the move is pretty much iconic to me now.

LVP Asking Erika What Her Husband Is Like In Bed

After Erika revealed that her husband Tom Girardi is 76, everyone gave their obligatory reaction of shock. Then LVP asked about their sex life. That's a pretty weird thing to say to anyone you just met — even someone as open as Erika.

Kathryn Confronting Faye About Her Book

Kathryn Edwards actually had a legitimate pre-Housewives beef with the "morally corrupt Faye Resnick". Faye's infamous book about the O.J. Simpson trial mentions Kathryn and her ex-husband Marcus Allen, which greatly offended Kathryn. The new Housewife confronted Faye about it at Kyle's barbecue, but it was just really awkward because Kathryn was so offended, but had never actually read what Faye wrote.

Yolanda Showing Up To Lunch With Bella & Anwar's Medical Records

Yolanda was not really present too much this season, but when she showed up to have lunch with LVP and Kyle she was on a mission. She was offended that they were talking about her Lyme disease and saying that her children Anwar and Bella Hadid did not have Lyme too, so Yolanda brought their medical records to lunch and slammed them on the table. It was beyond dramatic.

In my opinion, this was the most overlooked moment of RHOBH this season. Erika told Kathryn that she had never felt comfortable having female friendships and Kathryn said that she could be her first woman friend and that she is trustworthy, but then she completely betrayed Erika. Erika confided in Kathryn about the fact that she is worried about being friends with LVP since she believes that she has manipulative tendencies, and Kathryn immediately went to Lisa Vanderpump to tell her what was said. SMH.

I just love Erika for flying out her entire hair, makeup, and styling team for the women's vacation. She didn't even tell anyone they were coming, as if she just checked an extra suitcase or something. I love how this was such a casual thing for her.

I don't get why Lisa Vanderpump would apologize to Eileen for upsetting her and immediately admit on camera that she didn't mean it. It really made her look like she didn't care at all about Eileen's hurt feelings.

Yolanda Walking Off The Reunion Set

Yolanda is always so composed, so I was pretty surprised to see Yolanda storm off in the middle of the reunion. Then again, I don't blame her since her health was questioned for most of the conversation and that must have made her feel extremely uncomfortable. Luckily for her, Erika is an amazing BFF and she chased right after her to calm her down.

As you can tell, in my eyes Erika pretty much saved this season. Thank God she brought us some crazy non-Munchausen's related moments!

More like this
Kendall Jenner Thinks Tristan Thompson "Wanted To Trap" Khloé With Another Baby
By Jake Viswanath
‘The Ultimatum: Queer Love’ Is Officially On The Way
By Radhika Menon and Kadin Burnett
Netflix's 'Bling Empire' Season 3 Trailer Includes A 'Selling Sunset' Cameo
By Kadin Burnett and Sam Ramsden
Khloé Kardashian Debuts Baby Boy On 'The Kardashians' Season 2 Premiere
By Jake Viswanath
Get Even More From Bustle — Sign Up For The Newsletter