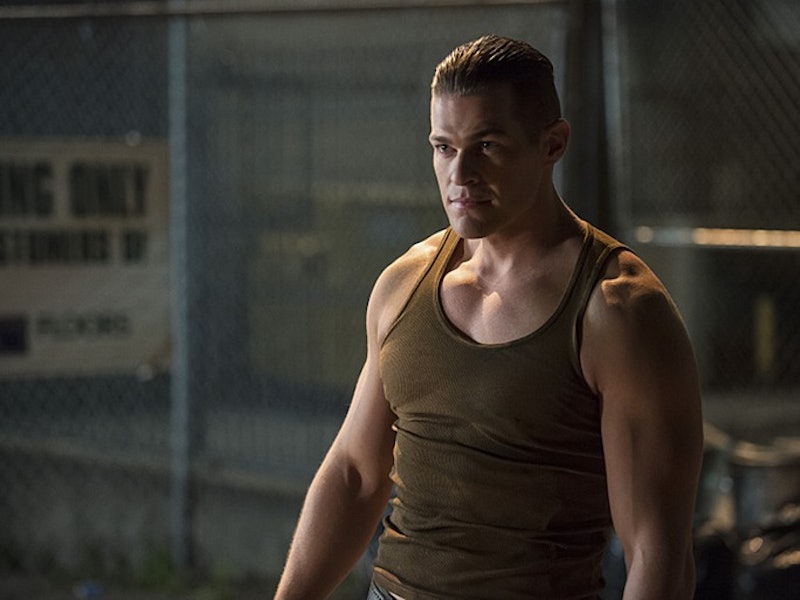 While it's understandable to think that Barry's disappearance on The Flash would be the worst obstacle our speedster gang would face in the near future, it looks like his absence is going to prompt other villains to come out of the woodwork — some of which we've already seen before. Tony Woodward aka Girder is returning to The Flash during Tuesday night's episode "The Runaway Dinosaur" and based on the synopsis, he's going to be up to his old tricks. But before we get into all that, let's do a brief refresher of who Girder actually is.

Girder first appeared back in Season 1, Episode 6, where we learned that he was a former classmate of Iris and Barry in elementary school who became a metahuman thanks to the particle accelerator. But unlike Barry who chose to use his powers for good, Girder maintained his bully-ish tendencies and chose to use his capabilities to wreak havoc on the people of Central City. And his powers are definitely nothing to shirk at. Due to the fact that he was hit by the accelerator after falling into a vat of molten steel, he's able to quite literally transform himself into steel, thus making him a pretty destructible force to be reckoned with.

But here's where things get a little interesting. According to the episode synopsis: "the team must figure out a way to handle the return of an old enemy — Girder. Realizing Girder is retracing his steps from his last attack, Iris volunteers to act as bait to trap him in S.T.A.R. Labs." And while that's all very interesting, the biggest question that should come to mind is how Girder is able to return in the first place, given that he was killed by Blackout in "Power Outage"?

I mean, returning from the dead is definitely not out of the realm of possibility when it comes to this show, but it'll be interesting to see how it all gets explained. Is he perhaps Girder from Earth-2? Did Barry's disappearance somehow yank Girder back to the land of the living? Has Melisandre been practicing her spells on someone other than Jon Snow? I'm afraid I'm just as in the dark as the rest of you right now. Even the promo doesn't offer up any helpful piece of information regarding his big comeback.

Either way, though, he's back and it looks like the Central City scooby gang is going to have to take him down without the Flash's help this time around. Let's just hope their combined efforts is enough to take down this not-so-super man of steel.