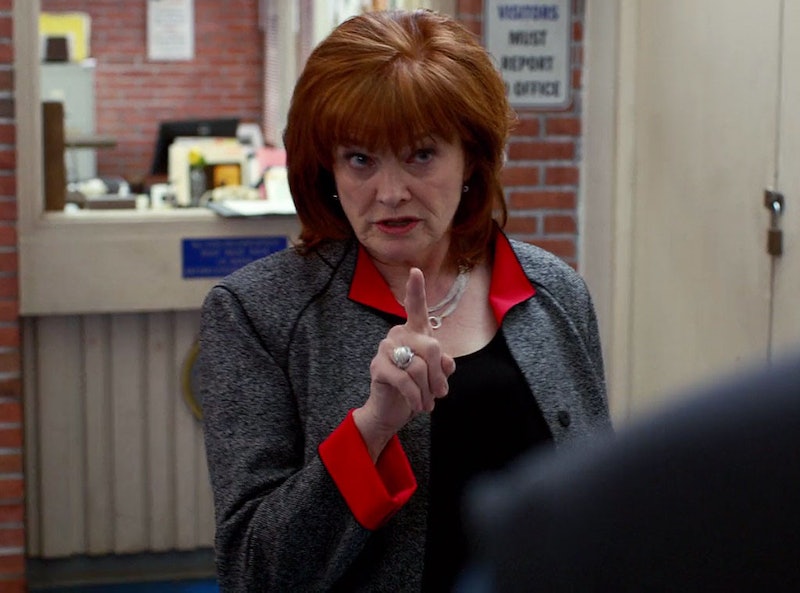 Brace yourself for some major changes ahead at Litchfield Prison. The Orange Is The New Black Season 4 trailer dropped on Tuesday, and, oh man, is it intense. Intense and dark and indicative of what could potentially be Litchfield's complete and total downfall. But, at least all the usual suspects are back to guide us along the way with their usual shenanigans. OK, except for the decidedly missing Alex Vause. (Did she survive the cliffhanger from Season 3?) Amongst this sea of familiar faces, there are also new inmates, and one new character in particular that's absolutely going to cause a chasm in the system: The inmate sitting with Poussey Washington (Samira Wiley) in the trailer, Judy King (Blair Brown).

The Martha Stewart-like mogul comes at the perfect time to shake things up, a time where Litchfield itself is undergoing some serious alterations. At the end of Season 3, Litchfield became a for-profit prison, which means that OITNB Season 4 will explore the effects of that shift, and the kind of pressure and tension it's placing on everyone at the penitentiary. We've got new Corrections Officers, 100 new inmates (according to Aleida Diaz, "It's sardine time"), and what looks like some new tension building between Piper and pretty much everyone. Maybe that last part's not new because, well, Piper. Regardless, the inmates have to adjust to all of this, and, if the trailer's any indication, it is not going to be easy. Check it out below.

Amongst all that glorious chaos, you might have noticed a red-haired woman sitting with Poussey that looks awfully familiar. Judy King, the TV personality inspired by Martha Stewart was sentenced to Litchfield last season for tax evasion, much to the delight of her biggest fan, Poussey. Since her introduction to Litchfield was a dramatic one (she self-surrendered), and she's given some limelight this trailer, methinks that Judy will have a pivotal role this season of OITNB. After all, what better way to up the ante on all of Litchfield's issues than to throw a celebrity in the mix, right? A high profile inmate can only add to the layered problems Litchfield's facing right now. What's more, Judy's not just any high profile inmate; she's one that's not going to sit back and let people take advantage of her.

In the trailer, Judy tells Poussey (who appears to be her biggest ally and confidant at the moment) "People always try to desexualize women my age and I just won't allow it." Whom could she be referring to? People in general? Or specific people at Litchfield? More than likely, it's both, but at least she has a sounding board in Poussey to share these thoughts. Poussey, for the record, looks both terrified and star struck by Judy, which means that this dynamic will probably prove to be an interesting one.