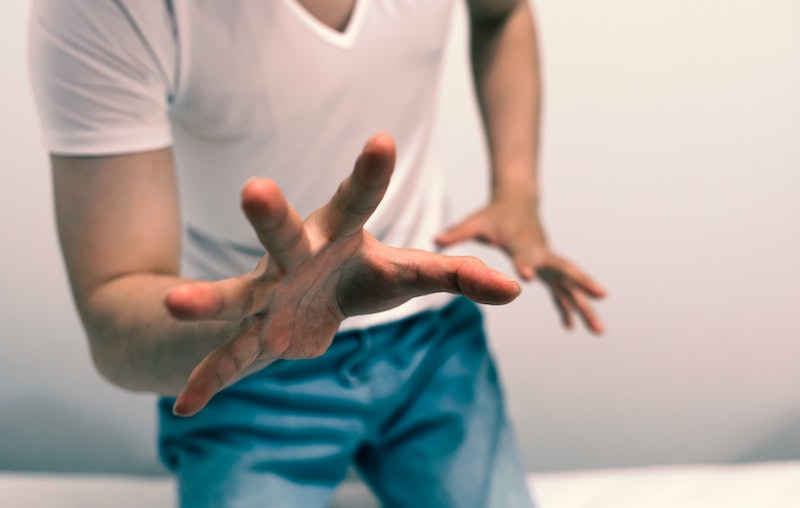 When you picture abuse occurring within a relationship, you might picture somebody who physically hurts their partner. But emotional and verbal abuse are not only common, but also just as damaging. That's what the hashtag #MaybeHeDoesntHitYou, created by artist/writer Zahira Kelly, calls attention to.

Kelly tells Bustle in a private Twitter message that non-physical abuse is often left out of conversations about intimate partner violence — something she's spoken about before in her writing and on social media. "[The] only difference was I hashtagged it to document it," she explains. "Before I knew it, it snowballed, and there were over 9,000 tweets from people sharing similar experiences." Kelly also participated in the creation of the #abuserdynamics, #abuserlogic, and #transfauxmativejustice hashtags to talk about similar topics.

"Women's primary cause of harm and death is abuse from their loved one. The toll is in the millions and has been especially damaging to colonized women such as myself," says Kelly, who is Dominican American and understands intimate partner violence and the stigmatization and victim-blaming associated with it firsthand. "The genocide and slavery we endured were justified via the same abuse culture that we face today. This is hundreds of years of abuse of all forms from the most extreme to the most subtle."

Indeed, one study in the Journal of the American Medical Association found homicide was the leading cause of death among pregnant women. And 34 percent of female victims of homicide in the United States were killed by intimate partners between 2003 and 2012, according to a 2014 Center for American Progress report.

But even more women have been the victims of emotional and verbal abuse. According to a CDC report published in 2010, nearly half of women — and half of men, as well — have been psychologically abused by a partner. This form of violence, however, is rarely acknowledged. "We are left without recourse," Kelly says.

Those posting under the hashtag are pointing out the myriad forms of emotional and verbal abuse, such as scolding, shaming, and humiliating a partner.

Another abuse tactic under discussion is gaslighting — making someone feel like their perceptions are faulty and their experiences don't matter. What makes gaslighting at the hands of a partner so emotionally damaging is that the perpetrator twists around every problem, including the gaslighting itself, to be the victim's fault, leaving the victim with no validation. Online conversations have the potential to combat this isolation.

Hashtags like this can both make people more aware of psychological abuse and help victims understand that the abuse committed against them was in fact abuse, even when their partners claim otherwise. "This is not an area we get support for, so these online [conversations] function as makeshift support groups and therapy," said Kelly.

Images: Fotolia; all tweets appear with permission from their users.