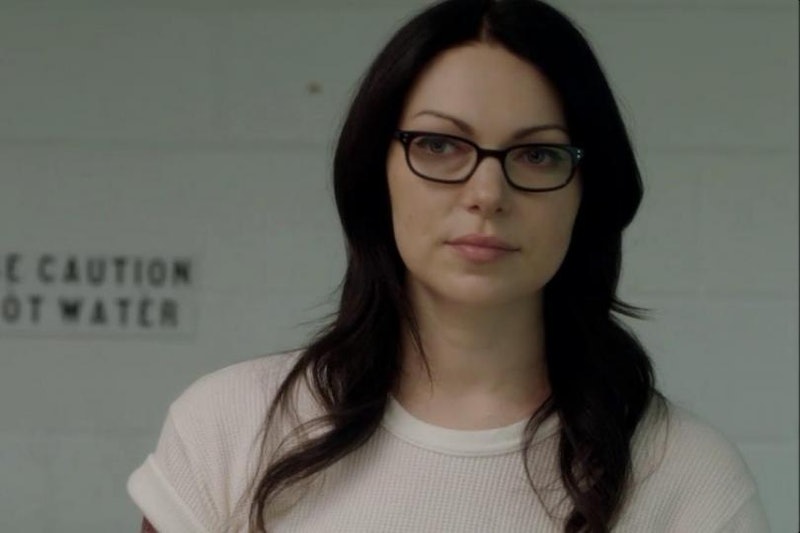 We've been on the edge of our seats since Season 3 of Orange Is The New Black left us with a nerve-wracking cliffhanger: it looked as the Litchfield's resident Bettie Page was about to get shanked. Since last June, the cast has kept relatively tight-lipped about Alex Vause's fate, and we've been turning to promos for answers. What's concerning is that Alex isn't in the Orange Is The New Black Season 4 trailer... so what does that possibly mean for her?

The first theory is that Alex died in her greenhouse scuffle with Aydin, because, well, he wasn't being sent over by Kubra to bake cookies with her. Lest we forget, Alex spent the entirety of Season 3 totally paranoid that Lolly was going to take her down, which is retrospectively lolz-worthy. Aydin's appearance, in a correctional uniform no less, was a hell of a twist, and it wasn't looking good for her.

However, I think you can breathe ease knowing that Alex didn't die... at least in the greenhouse. Previously promotional shots of Season 4 showed a panicked Alex weirdly peering over a fence, so we know that she at least survived to that point. More importantly, though, we seem to hear Alex's voice around the 0:55 mark asking Red, "Can you keep a secret?" It took me a few rewinds, but it definitely sounds like her, so we know she won't be DOA at the start of the season.

That doesn't mean that she's off the hook, though, because, if Aydin is still around, this definitely isn't a safe space. Perhaps all the small teases of Alex will still end with her exterminated before the season is over... still, I don't necessarily think that will be it. Then why is Orange Is The New Black trying to keep Alex on the DL?

Although the promo photo doesn't really show it, it could be possible that Alex was, in fact, badly mangled in her struggle. Maybe that perfect face of her severely damaged, or maybe her original eyebrows grew back (I know, Laura Prepon has had those arches since That 70's Show, they just look too good to be true). Maybe she got transferred and she shows up halfway through the season, even more traumatized than her first PSTD-laden return.

The problem with all these possibilities is that they seem like retreads of things we've seen on the show before. Maybe the boring truth is that Alex is still around, living in constant fear. Maybe the reason the OITNB folk are keeping it secret is because there's just too much else going on this season. The new "for-profit prison" is now about overloaded with a ton of new inmates (and I'm sure a thousand new backstories). Maybe we should stop worrying about Alex's fate and start worrying about the fact that Nicky is still MIA after being sent to max.

Definitely watch the full trailer before and draw your own theories, because it really just adds more confusion into the mix (although you end up with goose bumps, it's fine). And, as far as Alex is concerned, I look forward to her return... in whatever context it may be.