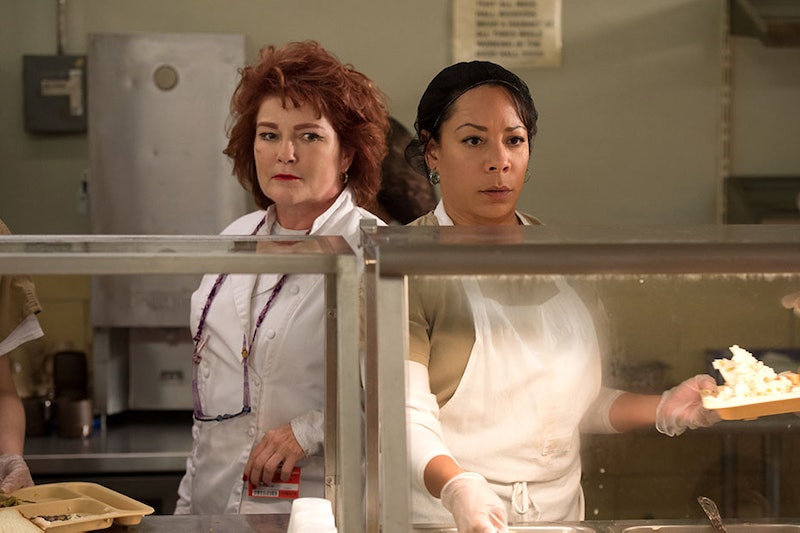 In many ways, the finale of Orange Is The New Black Season 3 ended quite happily. All of the inmates got through a hole in the fence and went swimming in a lake, frolicking around in the water and generally being besties. The big cliffhanger the series left us with, though, revolved around the fate of Piper Chapman's on-and-off-again love interest Alex Vause, played by the awesome Laura Prepon. Toward the end of the episode, Alex found herself alone in the greenhouse with the new prison guard, "toothpick guy," who'd been sent by her former boss to finish her off. While everyone else was having fun swimming, Alex Vause was fearing for her life. In typical Litchfield fashion, we never got find out Alex's fate. But now that Netflix have finally released some photos from Season 4 of Orange Is The New Black , we might be a step closer towards finding out what happened to Alex.

In one of the photos, Alex Vause is alive, and, well, leaning over a fence. While the character looks somewhat panicked, there are no scars or visible wounds, which is a very good sign. Coupled with the Instagram that Laura Prepon shared in character as Alex, all signs point to Piper's love interest appearing in Season 4. What do the other set photos tell us about Season 4 of Orange Is The New Black?

Good news Alex and Piper shippers! Alex looks very alive in this still. She does look somewhat panicked, though, meaning that she might still be in danger when Season 4 returns.

The kitchen has been at the center of many squabbles in Orange Is The New Black, but this set photo shows Red and Mendoza working together.

Boo and Pennsatucky have a strong friendship on Orange Is The New Black, and it looks like this will continue in the new season. But what are the pair in deep conversation about in this photo?

4. What Is Taystee Telling Crazy Eyes To Keep Quiet About?

Taystee has her hand firmly over Crazy Eyes's mouth in this photo, while Black Cindy looks on at the pair. The trio are definitely up to something.

5. Crazy Eyes Has A Suspicious Look On Her Face

Uzo Aduba is a constant joy in Orange Is The New Black, and it looks as though her character will be involved in a lot of interesting story lines in Season 4.

6. Piper Is Gagged, Her Hand On A Stove

The most terrifying photo of Season 4, Piper Chapman has been gagged by some of the other inmates and is being held down over a stove, her hand about to be burned or her finger about to be cut off. Whatever she's involved in, Piper has ended up in a precarious situation yet again.

7. Is Sophia Still In Solitary?

One of the great things about Orange Is The New Black is that it's not afraid to handle big political story lines. At the end of Season 3, Sophia, played by Laverne Cox, found herself in the SHU, albeit for "her own protection." The mistreatment of trans prisoners is a huge issue, and, from the looks of it, Season 4 isn't going to shy away from exploring what it means to be a trans woman in prison.

8. The Gang Is Still Here

It seems like some sort of showdown is happening amongst the Litchfield inmates in this photo. It's particularly good to see Daya, who gave birth to her baby in Season 3.

Season 4 of Orange Is The New Black premieres on June 17 on Netflix. That's plenty of time to marathon watch the first three seasons in preparation.