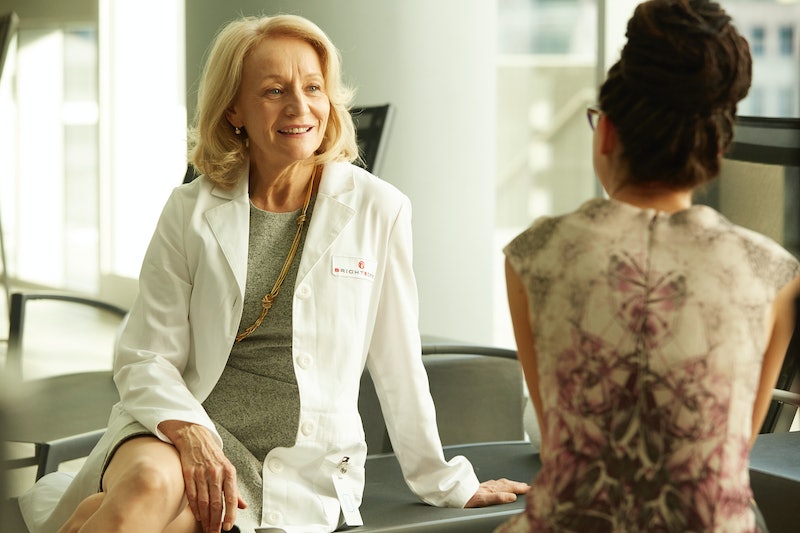 Uh-oh. Out of the show's primary clones, Cosima Niehaus has remained the most on the sidelines so far in Orphan Black Season 4 — so naturally, as soon as she does get involved, she gets in major trouble. Weakened by her worsening illness, we mostly saw her within the confines of her superhero-esque secret lab in the season's first four episodes. But when the Clone Club needs someone to infiltrate the Brightborn clinic — and Helena's missing, Allison's busy with suburban life, and Sarah's taking a day with Kira — it falls on Cosima's shoulders to tag along as Donnie's faux-surrogate when he goes to attend a new members orientation. But their mission leads to disaster when Cosima falls into the clutches of Susan Duncan.

Everything might have gone swimmingly if Krystal Goderitch hadn't happened to show up to the very same orientation. Cosima was smart enough to hide her face from Evie Cho during the Brightborn CEO's self-aggrandizing shpiel, but Krystal — still unaware that she's a clone — had no such compunctions about remaining incognito. So as soon as Evie caught a glimpse of Krystal, she was off to inform Dr. Duncan that there was a Project Leda clone in their midst.

A hilarious case of mistaken clone identity ensued: Looking at security footage of the facility, Susan saw Cosima and assumed that was the clone Evie was talking about. So she sought out the dreadlocked clone and had a conversation with her about Brightborn's dubiously ethical genetic experiments. Realizing that Cosima was too hot on their trail, Susan sent Roxie the evil EMT to detain her — but it was Krystal who got unceremoniously locked inside a conference room instead while Cosima, disguised in a nurse's uniform, made her way into a secure part of the building… just in time to witness the birth of a hideously deformed baby.

When Susan saw the irate Krystal demanding to be released, she calmly informed Evie, Roxie, and Ira that they had locked up the wrong clone. So Krystal was set free while Susan went and confronted Cosima, revealing her identity as the doctor who had created the Project Leda clones. Although Cosima was understandably furious with Dr. Duncan for experimenting on the Clone Club without their permission and refused to tell her the location of Kendall Malone, Susan offered the sick clone a deal: Cosima would give her the original genome, and Susan would give her a cure for her illness.

Will Cosima betray her sestras in exchange for her own life? If she refuses, will she ever escape the clutches of the Neolutionists? And what's up with the unexpected romance between Susan and Project Castor clone Ira? Things are getting even more tense as we officially pass the halfway point of Orphan Black Season 4…