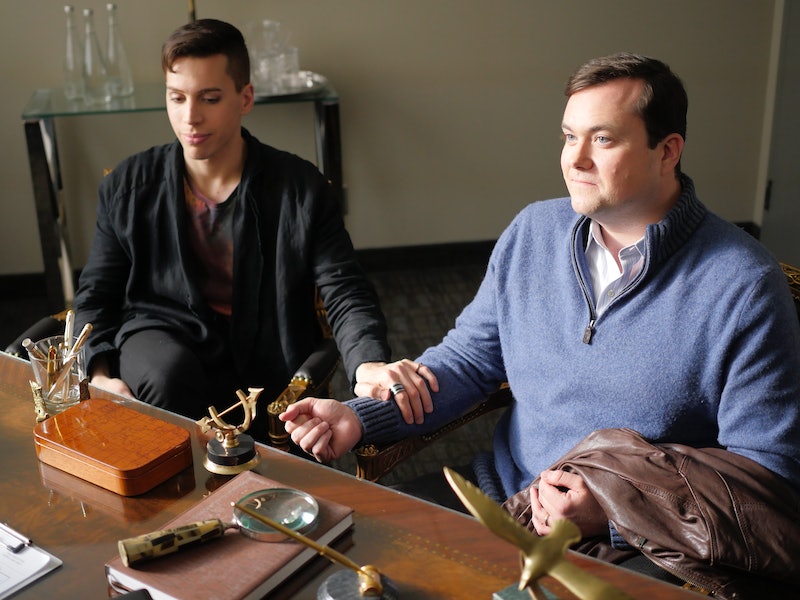 You have to hand it to it: Orphan Black Season 4 has done a remarkable job of scaling back the increasingly numerous and convoluted conspiracies that had begun to bog down the sci-fi series. All but two of the Project Castor clones were eliminated, and the Dyad Institute was scrubbed from the show with one throwaway line: "Dyad's out of the clone business." The premiere literally went back to basics, filling in Beth's backstory while essentially resetting the plot with a storyline about Neolution maggot-bots. But, if you thought the show was out of the conspiracy game entirely, then you were sorely mistaken: Thursday's episode introduced a brand new one, with the ominous title "Brightborn."

Sarah & Co. found their way to Brightborn when Alison was confronted in a coffee shop by Trina, the pregnant Neolutionist Beth had encountered shortly before her suicide. Mistaking Alison for Beth, Trina mentioned a fertility clinic that Beth had tailed her to — so the Clone Club wasted no time in tracking down said clinic, hoping it would aid their investigation into Neolution and their maggot-bots. Alison went with Donnie and Felix in tow and, since there was a chance she would be recognized as Beth, sent the two men in to pose as a gay couple and find out whatever they could.

While Donnie and Felix were busy giving "samples," Alison saw a neighborhood friend come out of the clinic and, after a manipulative conversation, managed to learn that the friend had participated in a secretive project she referred to as Brightborn. Tipped off by Alison, Donnie and Felix subsequently asked about the project, and were given a pamphlet of information that included an introductory video narrated by a familiar face: Evie Cho, the scientist we saw in Aldous Leekie's company during Beth's flashback episode.

While the introduction of Brightborn raises a lot of questions, it actually answers some at the same time. We finally know where Beth went on the night she killed herself, when she donned the blonde wig and returned with bloody hands and a key card with the letter "B" on it: we now know that "B" is the Brightborn logo. There are also a couple of references to Brightborn in the Orphan Black Season 4 trailer if you look closely. In one shot, Krystal (who has yet to make an appearance this season) is seen strutting into the Brightborn clinic. In another, Susan Duncan is seen standing in a white lab coat with the word "Brightborn" on it, saying "Remember me?" to someone off-screen. Oh, and standing just behind her is evil maggot-bot-seeking EMT Roxie.

What exactly is the connection between Leekie and his Neolutionist maggot-bots and Evie and her Brightborn clinic? Is Susan in charge of Brightborn or is she infiltrating it? Did Beth don that blonde wig in order to impersonate Krystal? I don't know, but between the cheek-worms and the Neolution-babies, this season of Orphan Black is shaping up to be the most squirm-inducing yet.

More like this
Why 'Black Bird' Suspect Larry Hall Recanted His Jessica Roach Confession
By Brad Witter
The 'Black Bird' Stars Are Both Heading Back To Apple TV+
By Brad Witter
'Yellowjackets' Just Announced Who’s Playing Adult Van & It’s Perfect
By Gretchen Smail
At 14, D'Arcy Carden Was Sneaking Out To Parties & Crying Over Kurt Cobain
By Ivana Rihter
Get Even More From Bustle — Sign Up For The Newsletter