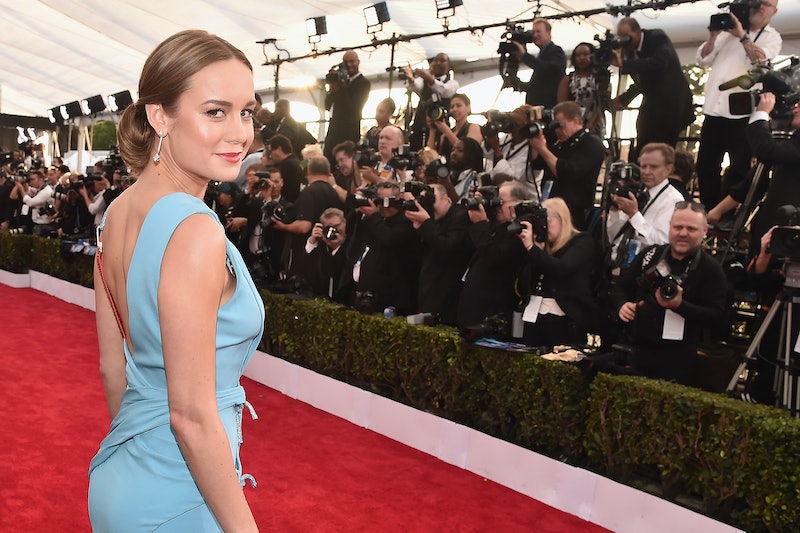 Hold on to your hair flip, friends, because in her next role Brie, Larson is going to get her hands on some serious styling products. On Tuesday, the first image from Larson's next movie, Free Form, was released, and it looks like this role is going to be a complete change of pace for the actor. After winning the Academy Award for Best Actress for her portrayal of a kidnapped mother in Room, the photos from Larson’s next film show that the star in going to take on a completely different role, one that's bound to be a complete 180 from who she played in the film that won her such critical acclaim.

Personally, I’m not really surprised by the turn. Anyone who has been following Larson’s career for longer than, say, the past six months, knows that she is an actor with serious talent. In addition to her stunning work in Room, she’s also starred in Trainwreck, United States of Tara, and 13 Going on 30, among other films and TV shows. In each one of her roles, Larson has brought stunning authenticity and originality; oftentimes I completely forget it’s Larson that I’m watching. That’s how good she is.

So it’s no wonder that she looks so convincing as Justine in Free Fire, a film set in 1978 about an explosive arms deal and its chaotic fallout in a Massachusetts warehouse. Larson plays the woman who has arranged the meeting between the parties involved, but when things go south and guns start blazing, chaos ensues. Sounds about as far from Room as you can get, don't you think?

It’s not at all surprising to me that Larson has been able to make such a stunning turn, stepping back multiple decades and embracing the part in such a convincing way. If anything, the fact that her role in Free Fire differs so drastically from her role in Room makes me want to see it even more. Larson’s range is incredible, and if this photo is any indication, she's going to shine in her next movie as much as it did in her first.