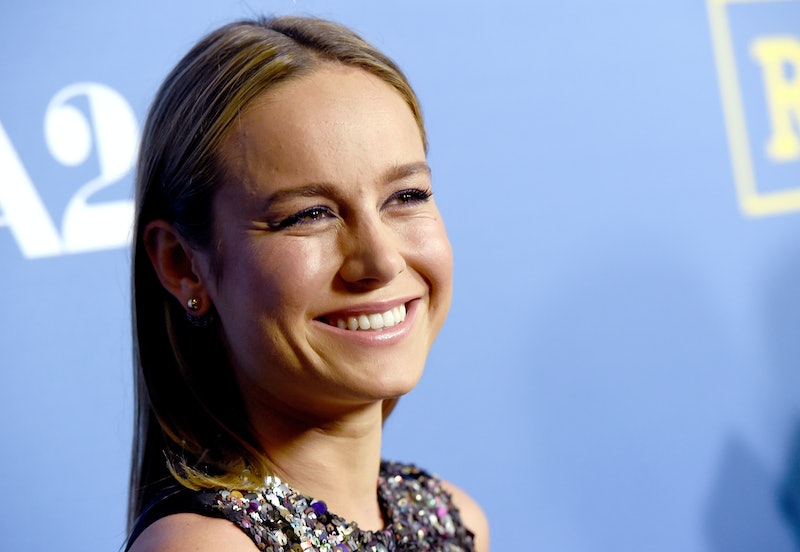 Actress Brie Larson isn't a newbie when it comes to movies. She has a vast portfolio — including 13 Going on 30, 21 Jump Street, Trainwreck, and Short Term 12. But none of those characters (as outstanding as they were) have earned the same critical acclaim as her latest role. Brie Larson stars as the lead in Room and it's already earning some serious Oscar buzz. As she previously discussed in an interview with Bustle, Larson underwent quite a transformation to get into character. In the movie based on an award-winning book by Emma Donoghue, Larson plays a woman who was held captive since she was a teen. She then must re-adjust to life on the outside with her now 5-year-old son Jack. Speaking of adjustments, all of the hype surrounding the movie is a change of pace for the actress, and in the latest issue of People, Larson opened up about the newfound attention she's receiving.

She told the magazine that she's still processing everything herself, saying, "The interesting thing about our brains is they can't figure things out in the moment. So, I've relieved myself of trying to understand it in the moment." While Larson may be adapting to the attention, in the interview, she also highlighted her amazing support system. She told People,

When I'm sitting in bed—that Brie I know. But I don't know the Brie in sky-high heels on a carpet with a bunch of people screaming at me. I wonder what she's like. Either way, I've got an awesome therapist and an awesome family, and two really cool dogs, so I'm good.

Sounds like she surrounds herself with all the right people (and pets). Honestly, I can't even wrap my head around what it must be like to be a celebrity, but Larson is handling fame like a champ. Dogs fix everything, right? And nothing beats the support of family. Plus, the fact that she gives a shoutout to her therapist highlights that mental health matters and there's nothing wrong with talking things out. That may not have been her intention, but it's an important message to spread nevertheless.

To learn more about the movie and performance that has everybody talking, check out the trailer for Room below.

Doesn't that make you want to get yourself to a theater ASAP? As evidenced by the quotes above, Larson remains as humble as ever, and it's among the many reasons it'd be great to see her win an Oscar this year.