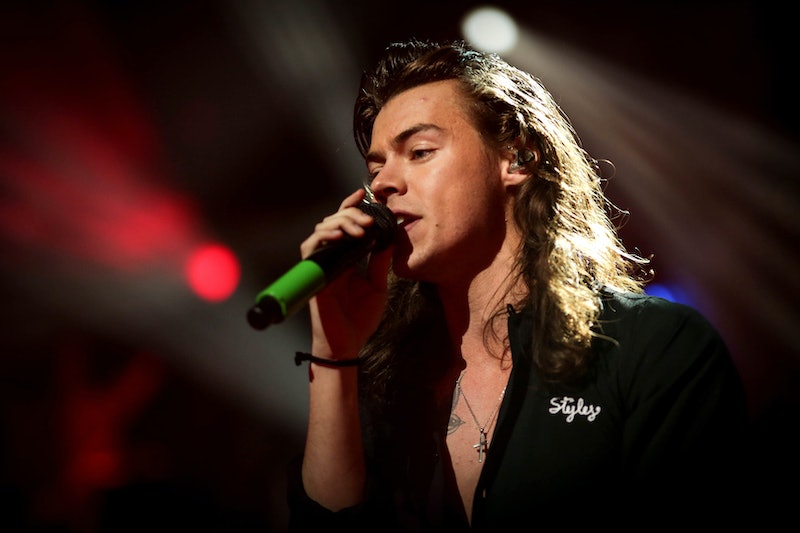 The long, cold winter of the One Direction hiatus drags on, but that doesn't mean all the guys are staying out of the spotlight. Though Harry Styles and his representatives have yet to formally confirm, the 1D singer has reportedly been tapped for a role in the upcoming Christopher Nolan World War II drama Dunkirk. Set for release in 2017, Dunkirk will dramatize the true story of the evacuation of a group of Allied troops from the titular French city in 1940. Styles reportedly joins Kenneth Branagh, Cillian Murphy, Tom Hardy, and Mark Rylance in the film. Those four actors alone have seven Oscar nominations and one win between them, and Nolan is one of the most sought-after directors in the industry, known for Memento, Interstellar, Inception, and reinvigorating the Batman franchise. That company makes for a high-profile, high-pressure feature film debut for the pop star. Fans in One Direction withdrawal are dying to know: what role will Styles play in Dunkirk?

When Deadline first reported in March on Styles's offer to appear in the film, no concrete information about his character was available, except in relative scope. "It is not believed to be a leading role," Ali Jaafar wrote for Deadline, "though all plot and cast details are being kept closely guarded as is often the way with a Nolan project." Sources told the site that the singer won the gig after "an extensive casting process" and "is believed to have impressed the filmmakers with his readings for the part." Of course he did! Who could forget his seminal performance as Marcel the Marketing Guy in the "Best Song Ever" video?

According to Variety, production is set to start in Europe in May, meaning that on-set pictures of Harry Styles could be gracing Tumblr dashboards soon. Dunkirk is a wartime drama, so odds are that the singer will be playing a soldier of some kind. (A moment of silence for everyone picturing Harry Styles in uniform right now.) Styles seemed to indirectly confirm his participation in the film last week when he posted an Instagram picture that basically shook the world. Those long, rock-star locks? Styles cut them off and donated them to a U.K. charity. The Sun caught him when surfaced a few days later in London; though the new look was partially hidden by his hat, Styles's famous curls are considerably shorter than the last time he rocked them on stage. As his caption says: "Whoops."

The cut alone doesn't confirm that Styles is playing a military man in Dunkirk. The film's action may not be limited to the battlefield; plenty of war movies add emotional resonance by checking in on what's happening on the home front. And Styles's former revolutionary hairstyle wouldn't be period-appropriate for any character of that time, soldier or not. Still, the 22-year-old singer is the perfect age to play a serviceman, so it's a solid bet that Dunkirk will throw Styles right into the middle of the action. War hero Harry is a nice concept, but let me tell you how not okay I will be if his character experiences one shred of pain. (I can so tell the difference between movies and reality.)