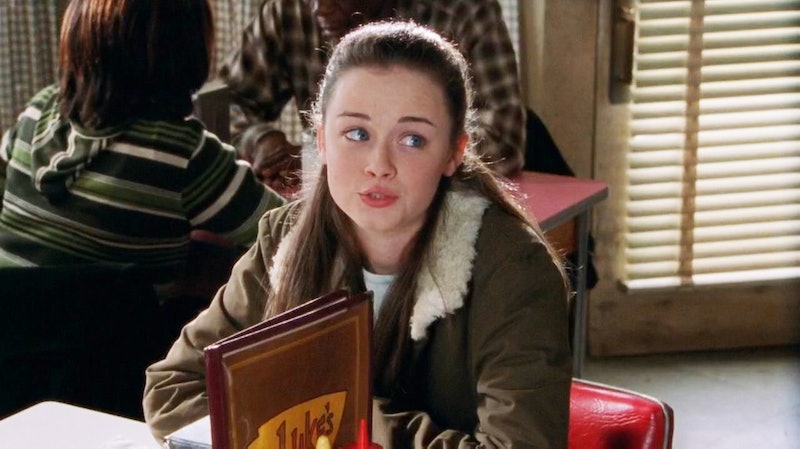 In Season 3, Episode 21 of Gilmore Girls, we get to witness what is potentially Rory Gilmore's best quote. In fact, it's the quote that proves Rory Gilmore should stay single in the Gilmore Girls revival. She makes a highly-evolved statement for a teenaged character in a show that, amongst other things, is also about typical TV show-targeted-at-girls stuff: dating and friendships and gossip and status. Context-wise, it's worth bearing in mind that this comes at the tail end of a long season full of romantic upheaval. Rory starts the season with her long-term high school boyfriend Dean, Dean breaks things off when he realizes that she has feelings for Jess, she takes up with Jess, and, when she discovers that he's concealed his absences from high school from her and is flunking, she breaks up with him over the phone. By the time Episode 21 rolls round, Rory is so ready to focus on her studies over her love life.

She's been up for hours studying, and her mother goes into the kitchen to make some coffee. Rory unloads a little: she's got so much to do before finals, she doesn't know how she's going to juggle it all. She says "I can't finish all this and sleep at the same time." "You have to sleep, it's what keeps you pretty," quips Lorelai. "Who cares if I'm pretty if I fail my finals?" says Rory. And this is the defining, important line that I'm talking about. This is the Manifesto of Rory Gilmore condensed into one line: self-sufficiency over emotional dependency.

Rory's never short on male attention throughout the series, but it always feels like whoever she's dating is important, but not as important as her ambitions. No matter how heartbroken she is over Dean or Jess, she always finds time to study. And this is, perhaps, why the state of Rory Gilmore circa the revival is a little surprising. The most ambitious woman in Stars Hollows didn't end up being a pro journalist; the possibility of Rory Gilmore teaching Chilton students is an unexpected twist.

We've seen the Rory-Gilmore-ditching-journalism storyline before. In Season 5, after Mitchum Huntzberger tells Rory she doesn't have "it," that mysterious quality that he thinks pro-journalists need to succeed, not making it in journalism depresses her so much that she drops out of Yale. While she's still with Logan, when she moves into her grandparents' pool house, she becomes isolated — something that seems depressing but actually proves necessary. After having some time to chew things over, she's more open to Jess's encouragement to go back to school and make something of herself. It feels like Rory Gilmore needs one thing when her life goes off-track: alone time.

Like mother, like daughter: just like Lorelai, Rory's character was developed by the writers over the course of seasons and seasons to show us that she was only half-whole without a fulfilling career. Teaching's a worthy passion, but it's hard to imagine that, after spending most of her life as a young adult training on the school newspaper and the college paper, Rory's journalism dreams were just a passing phase.

There's been endless romance drama in Gilmore Girls, and I'm sure there'll continue to be more in the revival, but as Rory says, who cares if she's pretty if she fails finals? Or, to make the quote more general, what's the point of being attractive to someone if you have no clue what you're doing in life? Let Rory stay single during the revival and give her the time and space to figure her career out. A whole new generation of high school girls needs to look to her to help them figure out where their own priorities lie. Relationships are great, but they come and go: a career that suits you is something that'll fulfill you for a lifetime.